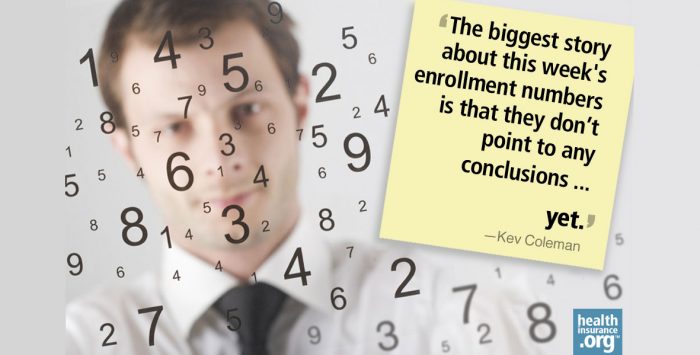 On Wednesday, the Department of Health and Human Services (HHS) released the preliminary enrollment numbers for new Affordable Care Act health insurance exchanges. The data included enrollments facilitated through 47 state and federal exchanges from October 1st through November 2nd. Over 106,185 people completed an insurance application and selected a health plan.

While this number was met with both criticism and cheerleading (depending on political leanings), the biggest story about the numbers is that they don’t point to any conclusions yet. Here’s why:

First, we are only one month into the open enrollment period for the Affordable Care Act. This enrollment period does not end until March 31, so there is considerable time for the government to increase its marketing efforts. The enrollment numbers in the first month were likely depressed by the technical problems experienced on the federal health insurance exchange and several state exchanges.

With that said, to meet the 7 million enrollee target, the exchanges will need to average over 50,000 enrollees a day starting in December when the federal exchange is scheduled to be fully operational. This enrollment number is very achievable given online enrollment functionality, but it still depends on consumers taking the initiative to shop and apply for coverage.

The second big reason why the current enrollment numbers don’t yet tell us much about the Affordable Care Act’s success is that we do not have demographic information (e.g. age, health status) on the enrollees.

If the current enrollees are young and healthy, the administration has some encouraging news for future Affordable Care Act premiums. If, on the other hand, enrollees have higher rates of health problems then premiums could rise considerably in 2015 unless the exchanges become more successful at attracting healthy enrollees.

We do know that 22 percent of people applying for coverage in the pre-Obamacare individual health insurance market were rejected often due to health status and medical history. The big question waiting to be answered is this group will have disproportionate representation among enrollees.

The third reason why the enrollment numbers don’t allow for big conclusions yet is that we do not know what is happening in the off-exchange health insurance market.

Consumers can enroll in Affordable Care Act health plans outside of government exchanges. Only those individuals claiming a subsidy must use the exchange for enrollment. The HHS enrollment report provided no data regarding off-exchange enrollments.

For insurers with both on-exchange and off-exchange health plans, they are regulated to keep both sets of enrollees within the same risk pool. We do not know at this point how many consumers who experienced exchange technical problems went to a broker or directly to an insurer to obtain health insurance and, thus, should be considered in the Affordable Care Act risk pools.

When will we have enough data?

When will we have enough enrollment data to make a definitive conclusion about the Affordable Care Act’s success? The easiest answer is after March 31, 2014 when open enrollment ends.

However, the more honest answer is that success will be measured against several criteria (uninsured rates, premiums, quality of health plan networks, etc.) and it is quite possible that the judgments will vary not just by criterion but by region.