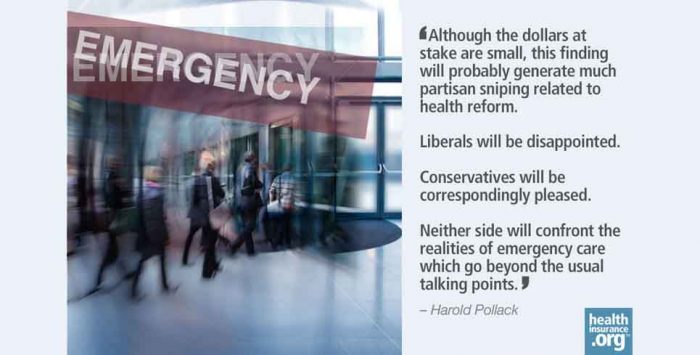 Today, a team of distinguished researchers released new findings from a major study called the Oregon Health Insurance Experiment (OHIE). The findings indicate that covering the uninsured is likely to increase people’s use of emergency care.

Although the dollars at stake are small, this finding will probably generate much partisan sniping related to health reform. Liberals will be disappointed. Conservatives will be correspondingly pleased. Neither side will confront the realities of emergency care which go beyond the usual talking points.

Here’s what you need to need to know:

Before describing the findings, here is some background: In 2008, the state of Oregon had enough money to enroll additional low-income adults into Medicaid. Rather than arbitrarily enroll some selected group, the state did something more useful. It held a lottery, drawing 30,000 names from its Medicaid waiting list of almost 90,000 low-income adults.

Over the past three years, a team of distinguished researchers compared the health care experiences, expenditures, and outcomes among low-income adults who were randomly invited to apply for Medicaid with those of less-lucky peers who participated in the lottery but were not given the same chance. OHIE allows us to explore at least the short-term impact of Medicaid enrollment on people’s immediate health status, on their use of various health services, and on the costs of their medical care.

OHIE researchers have documented some heartening and some not-so-heartening results. Gaining access to Medicaid was associated with striking improvements in self-assessed health. Medicaid increased the probability that people report themselves in good to excellent health (rather than fair or poor health) by 25 percent. Nearly all the improvements were in the domain of mental health. Medicaid lottery winners were much less likely to screen positive for depression.

Medicaid also decreased the proportion of people who struggled with medical debt, while reducing the probability of having unpaid medical bills referred to a collection agency by about 25 percent. People increased their use of primary care and preventive health services, and were more likely to receive important medications to manage diabetes and other important conditions. Although no one has performed a careful cost-benefit analysis, I am confident that such improvements in well-being more than offset the additional Medicaid expenditures.

Not all the results were so encouraging. Medicaid eligibility was not associated with statistically significant improvements in physical health. OHIE lacked the number of people or the long time period required to carefully explore these issues, but they certainly didn’t see dramatic beneficial effects.

As in other health insurance experiments, there’s no evidence that winning the Medicaid lottery improved personal health behaviors. Sometimes this had the opposite effect. Medicaid lottery winners were more likely to smoke. From an economic perspective, this makes sense. A pack-a-day habit and health insurance are both pretty expensive. Winning free coverage frees up some serious cigarette money.

The latest paper, published today in the prestigious journal Science, explores 2007-2009 patterns of emergency department (ED) use. To make a long story short, Oregonians invited to participate in Medicaid were more likely to frequent emergency departments, and made, on average, more visits than their otherwise comparable peers.

It’s not entirely clear how these experimental results can be generalized. Those who signed up for the Medicaid waiting list and pursued coverage if they won the lottery are a relatively high-need group. Perhaps over time, new Medicaid recipients will develop routine primary care arrangements that will moderate their emergency care use. I would be surprised, however, if the basic results were reversed.

This paper will embarrass some liberals, who have argued that near-universal coverage would reduce ED use. It probably should. There was never good reason to believe that expanded coverage would reduce the overall rate of ER use. There was never much reason to believe that this is even a sensible policy goal. Yet those crowded ERs provide an irresistible talking point that was never properly evidence-based, even if it sometimes served the political cause of universal coverage.

For thirty years, health researchers have understood that demand for emergency care is influenced by the price. Of course you will go to the hospital if you are shot or suffer a heart attack. And in fact the OHIE team found little impact of Medicaid on ED use for serious conditions leading to hospital admissions. Yet many ED visits aren’t like that.

Suppose you wake up in the middle of the night because your tooth hurts. You must decide whether to grin-and-bear-it rather than spending several hundred dollars on emergency care. Or maybe your chest hurts or you have a bad headache. But you had a big Mexican dinner, which might be causing the trouble. You might take a calculated risk to avoid the hassle and save some money.

When you think about these scenarios, there is every possibility that giving people good insurance will increase rather than decrease ED use. The messy reality is that people both over-use and under-use emergency care. People sometimes over-use the ED when they could obtain better, more cost-effective care elsewhere. Others don’t go to the ED in true emergencies because they are deterred by the likely cost and the hassle. I almost killed my wife when I hesitated to call an ambulance when she woke up at 3 a.m. with what turned out to be a serious heart infection.

We do know two things.

First, we’re not talking about much money either way. The researchers estimated an average annual increase of 0.41 visits per covered person over eighteen months. That’s a 40% proportional increase, but so what? The author’s roughly estimate that Medicaid increases emergency care spending on the order of $120 per year per covered person.

Second, the emergency departments will be reliable paid for care they provide. If a Medicaid patient requires further inpatient care, the hospital will get paid for these services, too. This establishes the financial foundation for a stable and functional safety-net, in which providers don’t have to fear the burdens or uncompensated care, and in which they don’t need to cruelly pursue low-income patients over bad debts.

Such stability creates opportunities to address over-crowding and wait-times, too. The Dickensian condition of many EDs reflects inadequate financing rather than patient over-use. Properly financed, our emergency care system can expand and adapt. After all, when demand increases for Big Macs, nobody worries that McDonald’s will become chronically unpleasant and overcrowded.

Advocates across the political spectrum should stop using the ED for cheap talking points about the mythical savings associated with universal coverage or about the misbehavior of Medicaid recipients who supposedly waste huge amounts of money through overuse. We might, instead, take some satisfaction that we have created a system, open 24 hours per day, 365 days per year, which people turn to when they need help. Our challenge is to make this system work.