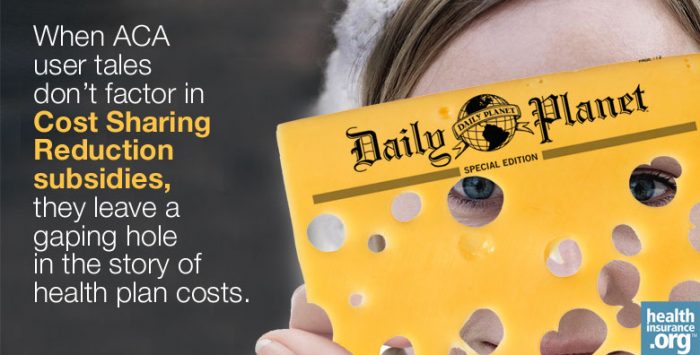 Hoo boy. The Chicago Tribune devoted a whole feature to the plight of low-income buyers of high-deductible Bronze Affordable Care Act plans in Illinois without once mentioning the Cost Sharing Reduction subsidies that radically reduce deductibles and out-of-pocket costs for such buyers – but only if they purchase Silver plans. That omission leaves a gaping hole in the story.

It’s true that in Illinois, too many low-income ACA shoppers bought Bronze plans in 2014. According to HHS statistics, 29 percent of the plans sold in Illinois were Bronze, compared to an average of 17 percent for the 36 states using HealthCare.gov (as Illinois does). Among buyers eligible for any kind of subsidy, 25 percent of Illinois buyers chose Bronze, vs. just 15 percent for all HealthCare.gov states (a still-lower percentage of those eligible for CSR bought Bronze).

Tribune reporter Wes Venteicher does well to highlight the plight of those who bought plans that provide no coverage for the average user’s yearly costs, other than the free preventive services mandated by the ACA. He leads with unsatisfied buyer Martha Gruberman, a 63-year-old woman with an annual income of $22,000 who chose a $5,000-deductible Bronze plan for 2014.

What’s left out is that Ms. Gruberman is eligible for CSR that would raise the actuarial value of any Silver plan – that is, the percentage of the average user’s annual out-of-pocket costs – to 87 percent, versus 60 percent for a Bronze plan. Let’s see how that plays out.

Tough choices, but not terrible ones

According to the Tribune story, Ms. Gruberman’s high-deductible Bronze plan will cost $67 per month to renew this year (though this year’s cheapest Bronze would cost her just $1 per month if her income is exactly $22,000). Depending on which county she lives in (her home town, of Steger, IL straddles two), she can buy a Silver plan for $74 per month with a $1500 deductible if she lives in Will County, or for $99 with a deductible of $100 if she lives in Cook. Both of these plans (and all Silver plans at this income level) have low copays for doctor visits, generic drugs and ER visits that kick in before the deductible. These quotes can be found within 30 seconds on Healthcare.gov‘s improved “See plans and prices” feature – now the first thing you see on the site’s home page.

A couple of caveats are in order. First, Ms. Gruberman did say that she can’t afford $67 per month – which, if taken literally, would put the Silver plans out of reach. Perhaps, though,primary care doctor copays of $10 and free generic drugs, offered in the cheapest Silver Cook County plan, or $30 primary care copays and free generic drugs, offered in the cheapest Silver plan in Will County, would change her mind. Second, the Bronze plan Ms. Gruberman bought for 2014, probably a Blue Cross Bronze PPO, could not have gone up to $67 per year unless her income changed. Finally, there’s more choice in the Illinois market this year, and some Bronze plans do offer low copays that are operative before the deductible kicks in, so Ms. Gruberman might choose a Bronze plan with little or no monthly premium that provides useful benefits. No one is suggesting that the choices are easy.

In fact, with all its celebrated new entrants, the Illinois marketplace arguably offers too much choice. Cook County posts 43 Bronze plans and 53 Silver ones. A 63-year-old with an income of $22,000 can get a Bronze plan for $1 per month – or for $528 per month. What kind of insanity is that? More than a dozen Bronze plans cost more than the cheapest Silver. More realistically, 23 Bronze plans would cost Ms. Gruberman under $50 per month, if her income remains at $22,000. If she were to choose Silver, price constraints would probably narrow the choice: there are five between $99 and $125.