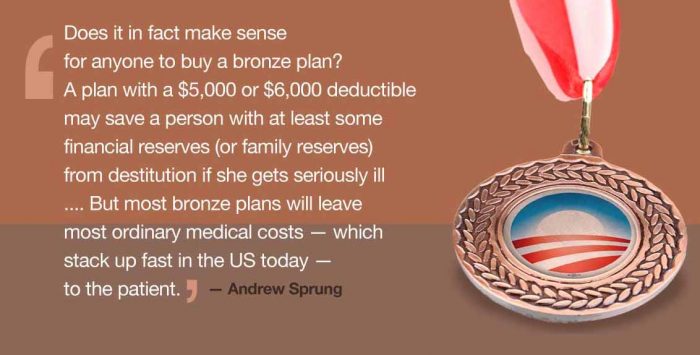 One worry that was often voiced in the media when ACA plans and prices were first sinking into the national consciousness late last year was that lots of people of limited means would end up in high-deductible plans, leaving them on the hook for thousands in out-of-pocket medical costs. In December, as substantial numbers of people finally began enrolling, the Wall Street Journal reported that Bronze plans carried average single-person deductibles of over $5,000.

Bronze plans are almost always inappropriate for exchange shoppers with household incomes under 200 percent of the federal poverty level (FPL). Private plan buyers below that threshold are eligible for strong Cost Sharing Reduction (CSR) subsidies that radically reduce deductibles, co-pays, and maximum out-of-pocket (OOP) costs – but only for buyers of Silver plans. (Buyers with incomes between 200 and 250 percent FPL are eligible for much weaker CSR that only marginally reduces OOP costs.)

Fortunately, as it turned out, the vast majority of CSR-eligible buyers did find their way to Silver plans, despite substantially higher premiums for Silver in many areas. Among subsidy-eligible buyers on HealthCare.gov, only 15 percent chose Bronze plans – and the number is doubtless far lower for those under 200 percent FPL. In New York – the only state as far as I know that broke out buyers’ selections by income level – 89 percent of buyers under 250 percent FPL bought Silver.

Who wins with Bronze?

Does it in fact make sense for anyone to buy a Bronze plan? A plan with a $5,000 or $6,000 deductible may save a person with at least some financial reserves (or family reserves) from destitution if she gets seriously ill. Also, all ACA plans provide a menu of free preventive care benefits – yearly checkups, birth control, cholesterol screening, colonoscopy, etc. But most Bronze plans will leave most ordinary medical costs – which stack up fast in the U.S. today – to the patient. For whom might such a plan be a prudent choice?

Let’s start by ruling out almost everyone with income under 200 percent FPL – even when Silver premiums are a hard swallow. In Mississippi, the premium differences between Bronze and Silver were steep last year. In Adams County, a single 35-year-old earning $19,000 would pay just over $20 per month for the cheapest Bronze, vs. $70 for the cheapest Silver. At that income, $600 in extra premiums is no joke.

But in Adams County in 2014, the cheapest Bronze plan had a monstrous $6,300 deductible; the cheapest Silver, just $1,100. The second-cheapest Silver, at $76, had a deductible of just $750. The difference got through to Mississippians. Only 8 percent of buyers in the state chose Bronze, the lowest percentage of any state in the nation.

That’s a good thing, because the Bronze plan in question provided no financial help for any medical services before the deductible was reached, excepting the ACA’s mandatory free preventive services,. But that is not the case with all Bronze plans on the exchanges.

Discounts before the deductible

The unsubsidized premium is about $50 per month lower than that of the cheapest Silver plan – also from Coventry – which itself has a deductible of $3,750, and higher copays on at least one service (specialist visits) than the Bronze. Unlike with the Bronze plan, however, the $500 ER copay kicks in before the deductible is met. Both plans are Preferred Provider Organizations – probably with the same network – and both leave the buyer on the hook for the highest allowable maximum yearly out of pocket costs, $6,600.

The choice between those two plans is frankly difficult – unless the buyer earns under 200 percent FPL, which radically reduces the deductible and OOP costs on the Silver plan. (but if you buy that Bronze, stay out of the ER.) So let’s ask again: for whom might the Bronze bell toll? Here is a provisional checklist for potential Bronze plan buyers:

While older buyers, if healthy, may often have a more solid financial case for buying Bronze, younger buyers with some income may find the option more tempting. A 30-year-old earning $30,000 will pay $206 per month for the benchmark second-cheapest Silver plan, unless the unsubsidized price of that plan in his area is lower.

That’s a lot of money at that income, and if the Bronze plan is, say, 20 to 30 percent less per month, it may look attractive. It may even be attractive, if some services are provided before the deductible is reached. But it does leave a person on the hook for very substantial potential costs.