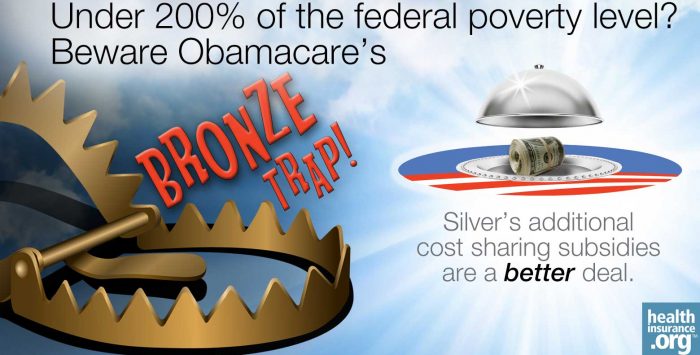 Jed Graham, a meticulous critic of various aspects of the ACA, charges that as the tax penalty assessed to Americans who remain uninsured ratchets up, it will club millions of low-income people into high-deductible Bronze plans that will do them little good.

Along with a criticism of ACA design, Graham’s broadside can be read as a warning to low-income ACA shoppers: Don’t buy Bronze! Fortunately, most don’t. But Graham posits that more will, going forward.

Graham’s math is sound, and the problem he spotlights is real, but in my view he paints too dire a picture, based on a questionable assumption: that the bulk of still-uninsured people in the income range he spotlights (150 to 250 percent of the federal poverty level, or FPL) who choose plans will select Bronze plans.

Here’s the problem Graham focuses on: For people with incomes up to 200 percent FPL, and to a lesser extent up to 250 percent FPL, Silver plans are enhanced with cost-sharing reduction subsidies that reduce out-of-pocket expenses to a manageable level (at least up to 200 percent FPL). But people in the 150- to 250-percent FPL income range may find Silver premiums expensive, and too many select Bronze plans, which in 2016 will have deductibles as high as $6,850 per individual, usually with minimal benefits available before the deductible kicks in.*

The uninsured and the underinsured

To raise his alarm, Graham tacks together two figures: relatively low takeup rates found by one survey for people in the target income range, and Bronze plan takeup rates for the same group. In brief, the uninsured and the under-insured:

The best available data show that only one in three eligible individuals with income from 150 percent to 200 percent of the poverty level selected plans in 2015 that might keep them from being swamped by medical debt if they land in the hospital. Among those in the next income tier, from 200 percent to 250 percent of the poverty level – who receive less generous premium subsidies – just 1 in 5 eligible individuals signed up for coverage that might keep them out of financial distress if they incur large medical bills.

Let’s look first at the underinsured part of the equation – that is, the Bronze plan buyers in this group.

Graham acknowledges but does not emphasize that so far, while too many low-income ACA private plan buyers have selected Bronze plans, a large majority have selected Silver and so accessed their cost-sharing reduction (CSR) subsidies.

Overall, 77 percent of CSR-eligible buyers have accessed the benefit. Silver selection drops precipitously at 201 percent FPL, because CSR is weak in the 201- to 250-percent FPL range (see the note below for details).** Over 80 percent of buyers up to 200 percent FPL do select Silver and access the strong CSR available to them. In states running exchanges that actively steer CSR-eligibles toward Silver – including Connecticut, New York and Rhode Island – Silver selection for buyers up to 200 percent FPL is over 85 percent.

Graham implies that still-uninsured buyers in the 150- to 250-percent FPL range have so far remained uninsured because they find coverage unaffordable, and so they will disproportionately choose Bronze when the mandate penalty pushes them to buy:

By spurning exchange coverage in the first two years, a wide majority of modest-income individuals have signaled that they find the coverage options unaffordable. Yet as the mandate penalty ramps up to the greater of $695 or 2.5 percent of taxable income starting in 2016, many of these low-income individuals will be pushed to select a Bronze plan that costs roughly the same as, if not less than, the mandate penalty.

The assumption here is that those who have remained uninsured find ACA private plans more unaffordable than those at comparable income levels who bought plans. There may be some truth to that, as some people who have remained uninsured have examined their options. But many if not most have not – and many who have logged on to an ACA exchange have mistakenly concluded that they are not eligible for aid. A Kaiser survey released early this year found that 49 percent of those who sought coverage and were told that they were ineligible (or understood as much) appeared, in fact, to be eligible for aid. (I reported some ways that online shoppers might get “false negatives.”) Other surveys have found that a large majority of those who remained uninsured, whether or not they sought coverage, were eligible for subsidies and unaware of that fact.

As Graham notes, current private plan enrollment stands at about 10.2 million, versus an initial CBO projection of 13 million by this point. That gap points to limitations in outreach and exchange website usability (though that has vastly improved). But while enrollment lags CBO projections, CBO always projected a four-year path to full takeup. It was always recognized that getting people across the country fully educated as to their options would be a hard, slow grind. The refusal of government officials in red states to work to maximize ACA enrollment has made it harder. While some still-uninsured people in the income range Graham spotlights (150-250 percent FPL) have doubtless assessed their real options and deemed coverage unaffordable, they’re probably a minority.

Finally, Graham’s composite estimate of the un- and underinsured in the 150-250 percent FPL range depends on Avalere’s estimate of ACA private plan takeup rates. While Avalere’s methodology is sound – the firm compared HHS enrollment-by-income-level data with prior federal survey data about the uninsured (American Community Survey, 2013) — it’s based on estimates that are necessarily imprecise. For one thing, it may not take into account boosts in employer-sponsored insurance in this income bracket.

None of this is to suggest that ACA private plan offerings don’t pose affordability challenges to prospective buyers or that the offerings don’t grow less attractive and affordable as you move up the income scale. And Graham may be right that later adopters (i.e., new buyers in 2016 and beyond) may lean more toward Bronze plans – nationwide Bronze takeup rose to 22 percent in 2015 from 20 percent in the prior year and may rise more as plan prices rise (though subsidized benchmark Silver plans take the same percentage of income every year). But I doubt that we’ll see a massive spike in Bronze plan takeup as more uninsureds buy exchange plans, as Graham implies.

While Bronze plans are inappropriate for most low-income buyers, moreover, they’re not inappropriate for all. Healthy young adults may gamble on Bronze; for those with some family resources backing them, the gamble may be rational. On the other end of the age scale, Bronze plans are often free or close to it for older buyers, and early retirees or semi-retirees may have low current incomes but enough resources to cover a high deductible if necessary.

Graham treats what he calls “the Bronze trap” in more detail in his just-released e-book, Obamacare is a Great Mess (inaptly titled, in my view, as the book acknowledges the ACA’s core strengths as well as detailing various failures and imperfections). In the book, Graham advances several policy proposals to spring the trap. These include incorporating cost-sharing reduction (CSR) subsidies in Bronze plans as well as in Silver, albeit at a lower level – giving low income buyers a more viable premium vs. coverage tradeoff. I’m on board with that and have in fact proposed it myself. Graham further suggests giving Bronze buyers the option of rolling the CSR subsidy into premium price, further trading coverage for premium relief.

As Graham suggests, Bronze plans are inappropriate for most low-income ACA shoppers – though Silver plan premiums can be a hard swallow for many who are eligible for CSR. Website design can boost the percentage of those who access CSR, mainly by showing Silver plans first to those who qualify for CSR. Graham’s proposed reforms might reduce the ranks of those who choose to remain uninsured as well as the ranks of the severely underinsured – though diluting CSR by attaching it to Bronze plans might also increase the ranks of moderately underinsured buyers. Meanwhile, individuals seeking private plan coverage on ACA exchanges (and those aiding them) should make sure that they recognize the CSR benefit and weigh it fully in their calculations.