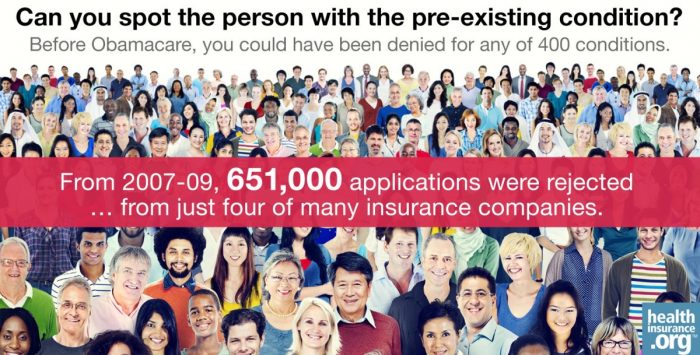 The Republican candidates for president who say they’ll lead the charge to repeal Obamacare if they’re elected (that would be all 17 of them) might want to take note of the most recent Kaiser Family Foundation poll: more Americans are now for the law than against it. If you don’t believe me, take a look at this.

One big reason more people are liking the ACA

What’s behind this change in attitude? I’m guessing the public is beginning to catch on to the fact that it’s not just the previously uninsured who are benefiting from the law. Slowly but surely, we seem to be realizing that’s it worth it to keep the law on the books, and maybe for no other reason than this one: insurance companies can no longer refuse to sell us coverage because of a pre-existing condition.

That provision of the law went into effect on January 1, 2014, the same day that coverage became effective for the first of several million people who would enroll in health plans through the Obamacare exchanges. Almost all of those newly insured people worked for employers that didn’t offer subsidized coverage, and many of them had been deemed uninsurable by insurance companies – nonprofit ones as well as their for-profit competitors – because of pre-existing conditions.

As bad as it was for insurers to be able to turn applicants down just because they had been sick in the past or had a chronic condition – in many cases conditions the applicants had been born with – chances are many if not most Americans simply didn’t know insurers could do that. If you get your health insurance through your employer, it’s not an issue, either now or before Obamacare (at least for most folks). Most group policies don’t discriminate against enrollees because of their age, gender or health status and never did.

A lot of people only found out that the pre-Obamacare individual health insurance market was different when they got laid off from work and lost their group coverage. Not only did they almost always experience sticker shock (no employer subsidy meant they had to pay the entire premium themselves), many of them found out they couldn’t buy coverage at any price because of a pre-existing condition.

400 ways to be denied coverage

Insurance companies maintained a very long list of conditions that could trigger a coverage denial letter. Not only that, but they also had scores if not hundreds or thousands of underwriters who did nothing more than make decisions about applicants’ suitability for coverage. If underwriters felt applicants might be a bad risk – in other words, might need medical care – the insurer could and often did send them rejection letters.

A Congressional investigation into this practice during the health care reform debate uncovered more than 400 medical diagnoses or conditions that insurers used to justify a coverage denial. At the top of the list were these (although not necessarily in this order as they varied from insurer to insurer):

The Congressional investigation was limited to four insurers (Aetna, Humana, UnitedHealthcare and WellPoint/Anthem) and covered only a three-year period: 2007-2009. It found that just those four companies had denied coverage to 651,000 people – one of every seven who applied – because of pre-existing conditions. It also found the rate of denials was increasing at the companies every year.

Pre-existing condition denials were on the rise

The investigators wrote this in a memo about their findings:

If the investigation had included other insurers – including the supposedly nonprofit Blue Cross plans across the country – they might have found even higher rates of denials. In fact, in my home state of Tennessee, the denial rates were far higher before the ban on the use of pre-existing conditions went into effect.

As The (Nashville) Tennessean reported in 2011, health insurers operating in the the Volunteer State had denial rates that ranged from 17 percent to 34 percent. Citing figures based on an analysis by the U.S. Department of Health and Human Services, the paper reported that UnitedHealthOne (a UnitedHealthcare plan) had denial rates in 2011 that varied between 17 percent and 27 percent in Tennessee. Cigna’s rate ranged between 24 percent and 40 percent while Humana’s varied from 25 percent to 38 percent. Aetna showed a 32 percent rate.

Far and away the top denier – at 34 percent – was the state’s biggest insurer, the nonprofit BlueCross BlueShield of Tennessee.

Generally, the states with the highest rates of denial were in the South and Midwest where the overall health status of residents has consistently been worse than in other parts of the country. The incidence of cancer, heart disease and diabetes is higher in those states, a big reason insurers had no problem blackballing them in the years before the Affordable Care Act.

Ironically, almost all of those states are controlled by Republican governors and state legislators who never miss an opportunity to diss Obamacare and call for its repeal. If GOP lawmakers were able to repeal the law, their constituents, the people who voted them into office, would be among the biggest losers.

That’s because millions of them who can now buy coverage would be forced back into the ranks of the uninsured as soon as their insurance companies could once again turn them down for one of 400 different reasons.