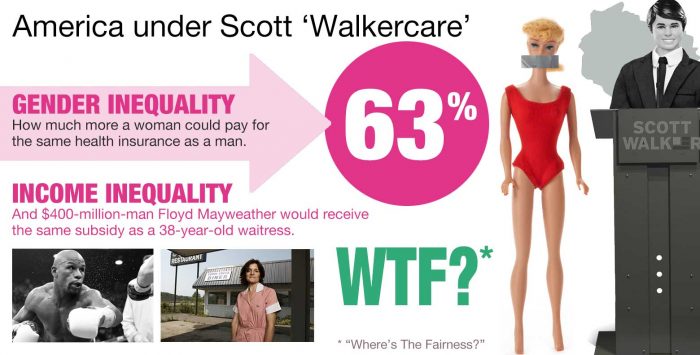 If women are beginning to get a tad concerned about what their world might be like if the next occupant of the White House is a Republican, they have more reason to worry now that some of the GOP candidates for president are cluing us in about their Obamacare replacement plans.

Wisconsin Gov. Scott Walker on Tuesday issued a white paper outlining what he would do if he could persuade Congress to repeal every word of the Affordable Care Act, which he and the 16 other candidates seeking the Republican presidential nomination have pledged to do – or at least try to do.

While none have gone as far as Walker in providing specific proposals, we can expect most of them will hew close to his plan – if they even have a replacement plan. (We shouldn’t expect much from Louisiana Gov. Bobby Jindal, who dismissed Walker’s plan as “Obamacare Lite.” Consumer protections and financial assistance for folks who can’t afford coverage are unacceptable to Jindal.)

A subsidy plan that short-changes

Like Obamacare, but unlike Jindalcare, Walkercare would make federal dollars available to people who want to have health insurance but can’t get it from an employer. The big difference is that the Walkercare financial assistance – in the form of tax credits – would not be based on need, and it would be capped at $3,000 a year.

Walker thinks it makes more sense to base the tax credits on a person’s age – the older you are, the more you would get, regardless of your income – than on whether or not you actually need financial help. A 35-year-old making $35,000 would get the same tax credit as someone making $350,000. For that matter, a 35-year-old who just got laid off and suddenly had zero income would still get no more of a tax credit than a 60-year-old billionaire.

No wait. The 60-year-old billionaire would actually get $900 more under Walkercare than our just-laid-off 35-year-old. Folks between 50 and 64 would get tax credits worth $3,000, regardless of financial need.

In an apparent attempt to make us think that his subsidy-distribution ideas are superior to the Affordable Care Act – and that women in particular would be better off under his plan – Walker chose a woman to illustrate how his plan would work.

“For example,” he wrote, “a 35-year-old woman who makes $35,000 per year and has no children gets $0 in ObamaCare subsidies – she’s too young and too middle class. Under my plan, this same woman would receive a $2,100 tax credit that she could use to shop for insurance in the open market and put any savings into a health savings account.”

The “open market” Walker would establish would be the kind of health insurance market that existed before Obamacare. There would be no more health insurance exchanges and the federally mandated consumer protections, including those that are especially meaningful to women, would disappear.

One of the most important consumer protections is the Obamacare provision that prohibits insurance companies from charging women more than men for the exact same coverage.

Remember when gender was a pre-existing condition?

Under Walkercare, insurers could once again discriminate against women – and you can be certain they would. In 2009, the year before Congress approved the Affordable Care Act, 37 states allowed health insurance companies to charge women more than men for individual policies and even to refuse to offer women coverage. That’s because insurers considered being female a pre-existing condition.

Those practices made coverage significantly more expensive for many women – if they could buy coverage at all. Sixty percent of those health plans charged a 40-year-old woman up to 63 percent more than a man of the same age for the exact same policy.

And here’s something else to keep in mind. American women on average still don’t earn nearly as much as men. In fact, according to the American Association of University Women (AAUW), for every dollar a man earns, a woman earns just 78 cents. As AAUW noted in a report earlier this year, that statistic is largely unchanged from a decade ago.

So under Walkercare, the average American woman – making 78 percent as much as a man – could have to pay 63 percent more than the fellow working in the cubicle next to her for the same coverage. That’s assuming, of course, that insurers were even willing to sell her a policy.

The National Women’s Law Center found that insurance companies were far more likely to deny coverage to women than to men for reasons ranging from acne and fibromyalgia (more common in women than men) to having had a C-section.

Walker may be assuming that once the Obamacare consumer protections disappear, the cost of coverage would drop. And it probably would for some people: those who are young and healthy and, of course, were born with a Y chromosome.

Older Americans will get the shaft, too

Women of a certain age often found it especially difficult to find affordable coverage pre-Obamacare. That’s because the older you get, the less appealing you are to insurers. But it wasn’t just women that insurers would rather not have as customers. In most states, people in their 50s and 60s used to have to pay five to 10 times as much as younger people for the exact same coverage. Insurers now can’t charge older folks more than three times as much as younger people.

Here’s another problem women would once again face under Walkercare’s “open market”: the possibility that their insurer would cancel – or “rescind” – their coverage after a diagnosis of a serious illness. As members of Congress learned during the health care reform debate, insurers used to routinely cancel policies of women who had just been diagnosed with breast cancer and other diseases. Congressional investigators found that just three health insurers rescinded nearly 20,000 policies over a five-year period, enabling them to avoid paying $300 million in medical care.

An investigation by the Los Angeles Times found that some insurers paid employees bonuses for finding policies to cancel in order to avoid paying for expensive medical care.

As imperfect as it is, Obamacare has done much to ensure that women have access to more affordable health insurance and that their coverage will be there when they get sick. Walkercare would take us back to the good old days (at least for health insurance company executives) when women fared far worse in the “open market” than they do today.