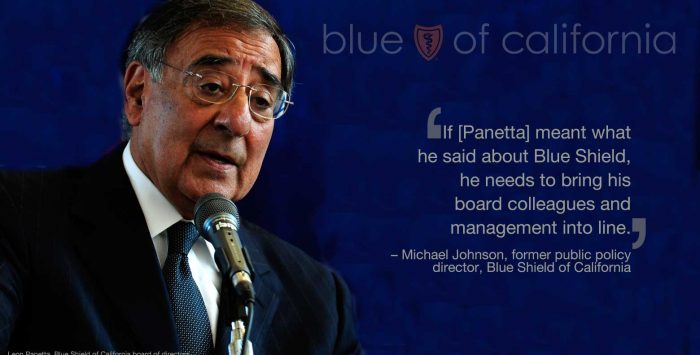 When former defense secretary and CIA chief Leon Panetta joined the board of directors of Blue Shield of California, he explained: “I have chosen to serve on the board of Blue Shield because it is a not-for-profit health plan . . . Blue Shield is focused on the long-term welfare of the entire community, not just its members.”

Recent events, however, cast doubt about that. California authorities revoked the nonprofit’s tax exemption last year, finding it does not advance social welfare. Its secretive executive compensation practices are drawing regulator scrutiny. And Blue Shield is now asserting it has no obligation at all to serve the public interest.

At the heart of the tempest are questions about exactly what Blue Shield’s nonprofit obligations are and whether it is fulfilling them – questions that have bubbled up periodically, without resolution, about nonprofit health plans across the country.

Fortunately, California has a powerful health plan regulator that appears to be tackling the core issues raised by the Blue Shield case. If California’s Department of Managed Health Care defines Blue Shield’s public duties in a meaningful way, that could set a precedent for other states.

Before continuing, I should describe my personal connection to Blue Shield. In March, I resigned as public policy director after concerns I’d raised that the nonprofit was neglecting its public duties were dismissed. Since then, I’ve pushed publicly for Blue Shield to do more for the community.

Despite its nonprofit status, Blue Shield has long acted like a for-profit company – stockpiling over $4 billion in reserves, paying multi-million dollar executive salaries, and charging rates just as high as for-profit insurers. It’s no surprise the state finally stripped Blue Shield of its tax exemption.

The move will do little, however, to protect the public interest. It forces Blue Shield to starting paying about $25 million a year in state income taxes, but does nothing to ensure the public will get its due from the billions of dollars in community assets bound up in Blue Shield.

The Department of Managed Health Care, or DMHC, offers the only hope on that front. When it comes to overseeing nonprofit health plans, California has combined the typical powers of a state attorney general and insurance regulator into this one agency. As a result, the DMHC has far-reaching authority to police not only the insurance activities of nonprofit health plans, but the performance of their nonprofit duties, as well.

In June, DMHC Director Shelley Rouillard announced she would determine whether Blue Shield has a “charitable trust obligation,” or legal duty to use its assets exclusively for public benefit. While the ruling by tax officials played a role, her primary reason for doing so was that Blue Shield is planning to acquire another health plan for $1.2 billion. That transaction needs her approval, and if Blue Shield has a charitable trust obligation, a higher level of review is required.

Its lawyers say no, the law says yes

Blue Shield has argued to the DMHC that it is a special type of nonprofit that has no obligation to do public good, akin to the Olympic Club, a tony San Francisco social club, or the Academy of Motion Picture Arts and Sciences, which puts on the Oscars. Blue Shield “operates only for the benefit of its policyholders and not the public at large,” its lawyers say.

That contradicts not only how Blue Shield’s most prominent board member has described the health plan, but also what Blue Shield has long told tax authorities and the public. For over 70 years, Blue Shield was excused from paying taxes because it claimed to operate for the “promotion of social welfare.” On social media, Blue Shield describes itself as “For community. Not-for-profit.”

As a result of such claims, Blue Shield’s assets now legally belong to the community and can only be used for community benefit. The people who run Blue Shield are trying to privatize those assets, which consist of the total net worth of Blue Shield and probably amount to at least $10 billion. If Blue Shield prevails in its arguments to the DMHC its 11-member board would be free to use those assets however they saw fit.

Where’s Panetta on all this? If he meant what he said about Blue Shield, he needs to bring his board colleagues and management into line. Get them to formally acknowledge their public duty and show how Blue Shield, going forward, is going to act “for the welfare of the entire community.”

Michael Johnson is the former director of public policy at Blue Shield of California (2003 – 2015).