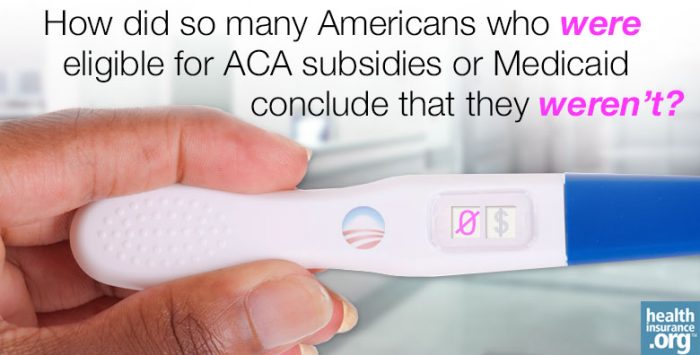 Reaching the uninsured once the Affordable Care Act exchanges launched was always going to be a long, hard road. In 2014, 7 million Americans bought private health insurance plans on the exchanges, meeting the first-year forecast of the Congressional Budget Office, and about as many again enrolled in Medicaid under the ACA’s expanded eligibility rules. But CBO forecasts 25 million private plan enrollments by 2017, and 13 million Medicaid enrollments.

By now it’s clear that many who are eligible either for subsidized private coverage or Medicaid under the ACA don’t know that they’re eligible. Disturbingly, new data from the Kaiser Family Foundation, which regularly surveys the uninsured, suggests that many who actively sought coverage and were eligible for aid either received positive misinformation or misunderstood what they were told or what they saw online.

For some, circumstances may have changed between the time they applied for coverage and the time of the survey. But Kaiser’s numbers seem in sync with a McKinsey & Co. survey conducted last April, which found that about two thirds of respondents who sought coverage, were eligible for subsidies and cited affordability as the reason they remained uninsured were unaware that they were eligible for help paying for insurance.

How could so many insurance seekers have missed such vital information? The Kaiser study does not make it entirely clear what respondents meant when they said that they were “told” they were ineligible for help. More than half used Healthcare.gov or a state exchange; more than half also used more than one method to seek coverage, such as calling an exchange hotline, contacting a Medicaid office, getting non-profit in-person assistance, or using a broker.

Whatever combination of methods Kaiser’s respondents may have used, it was all too easy for an unassisted applicant to get the wrong response from Healthcare.gov or the state exchanges.

I spoke about various tripwires in the online application process with Kate Kozeniewski, a Certified Application Counselor with Philadelphia-based Resources for Human Development, who personally helped hundreds of people to enroll in ACA plans in the first open season. She outlined multiple ways that a subsidy-eligible shopper on Healthcare.gov might generate a “false negative” with respect to a premium subsidy or Medicaid eligibility. All of these misfires could occur on any state exchange as well, though some exchanges might communicate more clearly on some points.

If you are seeking coverage for 2015, then, beware these pitfalls:

Many of these routes to misinformation and application failure are less likely to occur in the current open season than in the ACA’s inaugural one, when all problems were exacerbated by the long months of website dysfunction. Some of these pitfalls could be more effectively addressed by improved site design, such as by popup warnings when a user response will kill eligibility for aid. All can be avoided by skilled in-person assistance, whether from nonprofit navigators and volunteer application counselors or from licensed brokers. All should become much rarer as the country continues on the rocky road to full coverage.