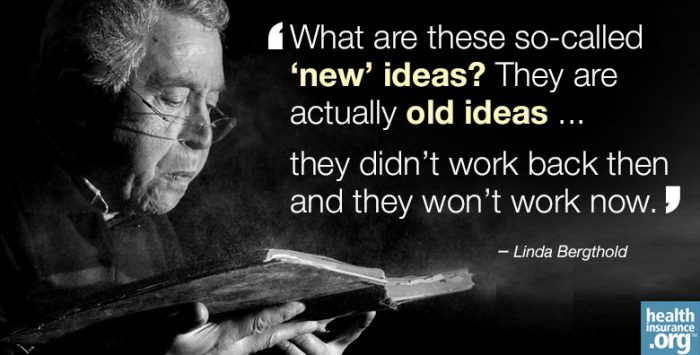 If Republicans have their way with health insurance reform and you live in a Red state, you are screwed. Why? Because Republicans would like to turn over much of the decision making about your health insurance to individual states, and the overwhelming majority of states with Republican legislatures don’t have much of a track record when it comes to expanding health insurance.

What are these so-called “new” ideas? They are actually old ideas … ones we have been hearing about for over a decade. They didn’t work back then and they won’t work now. I wrote about this in 2010 and again a few months ago. The Republican plan rests on three basic concepts they have been pushing for a long time:

I think we all know what “giving people more responsibility for their care” means – it means offering them the splendid opportunity to set up a health savings account where they can sock away all their extra money so they can spend it on a high deductible plan.

Fix medical malpractice? It sounds like an important issue because Republicans keep mentioning it, but in fact malpractice insurance costs represent less than 2.4% of rising medical costs, so it’s hardly an issue central to cost control.

Leaving coverage up to the states?

And why should state legislators in each state make those decisions, when they are so vulnerable to lobbying by drug companies or different medical specialists? The Hatch plan would give each state the right to decide what kind of services you need, in contrast to Obamacare, which defined a set of “essential benefits” for everyone.

Arlene Karidis wrote about this in healthinsurance.org back in 2011 before the mandatory maternity coverage in the ACA kicked in:

… starting in 2014, new individual, small business and health insurance exchange plans will be required to cover maternity care as an “essential benefit.” In addition, employer-sponsored plans and new individual plans will not be allowed to deny coverage for a pre-existing condition – and that includes pregnancy.

The Republican mantra is “get the federal government out of my business” (unless they want to regulate your use of birth control). Federal mandates are bad. (But state mandates are OK? There are hundreds of thousands of them). Patients should pay more (even though our health care is more expensive than any other country and our population is not healthier). If you just tell patients what things cost, they will make wise choices (like delaying care they need because it’s too expensive).

How we move backward with GOP’s plan

What would this replacement plan let states do? Let me describe a few ways:

Sending decisions about insurance back to the states will only result in less gain and a lot more pain for people in red states with Republican controlled legislatures. You may not be able to control where you live, but you shouldn’t be punished for it!