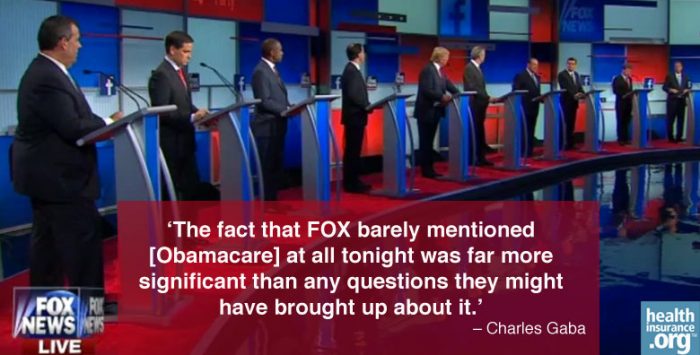 When healthinsurance.org asked me to write a “rapid response” entry to debunk the inevitable nonsense spewed about the Affordable Care Act from the mouths of several hundred Republican candidates during two debates this evening, I had to think about it for a minute:

Did I really want to spend three to four hours of my life subjecting myself to this drivel? I finally agreed, then half-jokingly asked whether I would receive hazardous duty pay.

In fact, I wasn’t sure what the point of writing the piece was, since I was certain that it would just be the same tired, debunked lies that FOX News and the GOP have been subjecting the country to for the past several years.

You know the score: “Job Killer!” … “Gazillions of Policies Cancelled!” … “Death Spiral!” … “$700B Stolen from Medicare!” and so forth – all of which have been proven flat-out wrong or absurdly exaggerated. Hell, I figured I could write most of this column before the debate even took place.

Near silence on Obamacare

Instead, something very different happened: Near silence on the ACA (in the midst a whole lot of screaming and insults on every other topic). Obamacare was virtually absent from both debates.

Oh, don’t get me wrong; between the two debates (the “Kiddie Table at 5 p.m. and then the “Main Event” at 9:00) there were a couple of ACA mentions here and there:

However, during the Big Event, the prime-time, nationally broadcast, massively hyped-up FOX News debate, aside from Kasich’s Medicaid question, Obamacare only came up one other time – and it wasn’t even really about the ACA:

In a question to Donald Trump, “The Donald” was reminded that he used to support single-payer healthcare, but now says Obamacare should be repealed/replaced. So the question was really about him being a flip-flopper – not about the ACA itself.

In short, from what I can gather, the Affordable Care Act …

… proved to be worth perhaps three minutes of total airtime and discussion out of nearly four hours of Republican Party Presidential debate.

Because FOX News – FOX NEWS – had consciously decided that Obamacare is no longer a top issue to spend time screaming about.

Five years ago right after the ACA was signed into law, David Frum, a neoconservative former speechwriter for George W. Bush, wrote an (in)famous essay called simply “Waterloo” in which he stated:

… Legislative majorities come and go. This healthcare bill is forever. A win in November is very poor compensation for this debacle now.

No illusions please: This bill will not be repealed. Even if Republicans scored a 1994 style landslide in November, how many votes could we muster … to re-allow insurers to rescind policies when they discover a pre-existing condition … to banish 25 year olds from their parents’ insurance coverage? And even if the votes were there – would President Obama sign such a repeal?

… So today’s defeat for free-market economics and Republican values is a huge win for the conservative entertainment industry. Their listeners and viewers will now be even more enraged, even more frustrated, even more disappointed in everybody except the responsibility-free talkers on television and radio. For them, it’s mission accomplished. For the cause they purport to represent, it’s Waterloo all right: ours.

King vs. Burwell was the Republican Party’s “Hail Mary” play. A few days after the Supreme Court decision came down back in June, I said:

Personally, I’m actually not particularly concerned about [the ACA being repealed] … I’m among those who believe that at this point, even if the GOP manages to sweep the House, Senate and White House next year, they still won’t actually make good on a full repeal of the ACA “root and branch” as Mitch McConnell keeps vowing … I truly think that it’s  already too firmly entrenched in the American economy and healthcare system in too many areas to be destroyed.

I could be wrong, of course. Perhaps FOX will indeed devote 30 minutes to an Obamacare Hatefest in one of their future debates. But the fact that they barely mentioned it at all tonight was far more significant than any questions they might have brought up about it.

Ted Cruz and some other GOP politicians may still be clamouring to “make 2016 a referendum on repealing Obamacare,” but unless I’m mistaken, FOX News has finally accepted reality: The Affordable Care Act is here to stay.