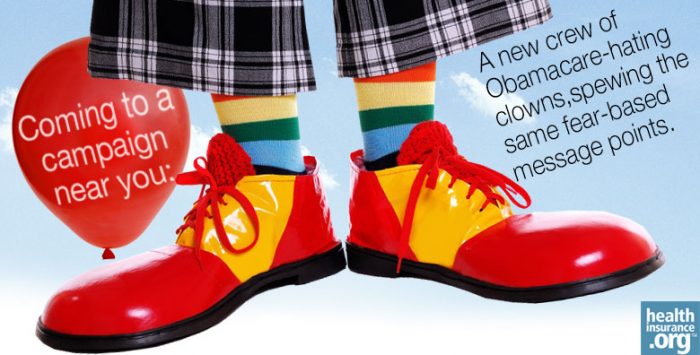 We were honestly prepared for the unthinkable today … that the Supreme Court would issue a ruling that would invalidate the Affordable Care Act’s health insurance subsidies. Our relief is immense.

But here’s the thing: The game is not over.

Despite a much-welcome avalanche of celebratory headlines – including my favorite from The New Republic – the game is far from over. The Affordable Care Act – which continues to help millions of Americans afford comprehensive health insurance and protect them from discrimination – is not safe. Not by a long shot.

Sending in the clowns

Already today, Republican presidential hopefuls have made it clear to their Obamacare-hating base that they will continue to fight for repeal of a law that actually disproportionately helps people in red states. It would not, in fact, surprise us if these candidates believe that today’s decision will help them in their quest for the presidency.

Likely, too, will be a veritable clown car of Obamacare-loathing candidates who will pop up in the coming election cycle – each ready to throw pies at any elected official or political candidate who has even hinted support for the law’s provisions. We can expect the same nonsensical fear-based message points but from a whole new slate of political contenders.

And it’s perfectly clear that despite President Barack Obama’s pledge to defeat any ACA-killing legislation that makes it to his desk, Republicans in Congress will continue to churn out bills that attempt to weaken the law. In the past week alone, the U.S. House passed a bill to repeal the ACA’s revenue-generating medical device tax and the Independent Payment Advisory Board that was created to help control Medicare costs.

The good news is that we have President Obama around until 2017 to swat away these attempts to water down – or drown – Obamacare. The bad news is that Republicans are going to waste another year and a half of time and money that could devoted to useful endeavors (getting jobs for more Americans, to name just one).

Turn up the celebration music, but don’t tune out.

If you feel as though today’s decision is cause to celebrate, then celebrate big. And be sure to mention to any Obamacare skeptics that the Supreme Court has now knocked down challenges to ACA’s legitimacy twice.

But also, keep tabs on your members of Congress. Get familiar with their votes on health reform and in particular, the Affordable Care Act. Call them up now and tell them to knock off the Obamacare repeal nonsense and get to work on improving the law with legislation that will further expand coverage. Attacking the family glitch would be a great place to start.

Of course you can also contact your members of Congress and let them know how you feel about today’s victory. Whether or not you personally had a health insurance subsidy preserved by this ruling, it’s still a victory for all Americans.