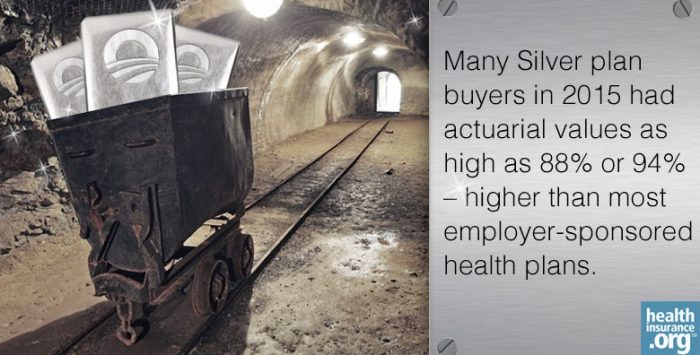 Healthcare reporters associated with Kaiser Health News rarely get their facts wrong. And an NPR/KHN report on the plight of those who bought ACA plans with high deductibles no doubt accurately reports the facts about the person in question. But the story is misleadingly framed. The problem is very real but less prevalent than reporter Jim Burress of WABE, NPR’s Atlanta affiliate, suggests.

Here is the story’s lead:

A key goal of the Affordable Care Act is to help people get health insurance who may have not been able to pay for it before. But the most popular plans – those with low monthly premiums – also have high deductibles and copays. And that can leave medical care still out of reach for some.

The focus here is not – as might appear at first glance – the ACA’s cheapest level Bronze plans, which do have sky-high deductibles, almost always over $5,000 per person, and yearly maximum out-of-pocket (OOP) costs over $6,000. ($6,600 was the maximum allowable in 2015). Bronze plans have a mandated “actuarial value” of 60 percent which means they’re designed to cover 60 percent of the average user’s yearly medical expenses. But they’re not the “most popular” plans – 21 percent of all private plan buyers on ACA exchanges chose Bronze in 2015.

Burress recognizes that: he’s focused in this story on high deductibles in Silver plans, selected by 68 percent of all buyers on ACA exchanges. Silver plans have a baseline actuarial value of 70 percent, which can indeed leave plan holders with high out-of-pocket costs. That’s probably the case for the person this story focuses on, who is facing an operation that will cost her $4,000.

But here’s the thing: a Silver plan with a baseline 70 percent actuarial value is kind of like the U.S. corporate tax rate: only a small minority of Silver buyers are subject to it. For buyers with incomes under 250 percent of the federal poverty level (FPL), Silver plans – and only Silver plans – come with Cost Sharing Reduction (CSR) subsidies that reduce deductibles, copays, and maximum out-of-pocket costs – very strongly for those with incomes under 200 percent FPL, much more weakly for those between 200 and 250 percent FPL.

Fully 85 percent of Silver plan buyers in 2015 accessed CSR.* Of those, about 80 percent** have incomes under 200 percent FPL and so get “strong” CSR, raising the actuarial value of their plans to 87 percent or 94 percent. That’s better than most employer-sponsored plans. It’s also better than ACA Gold plans, which have an AV of 80 percent. Platinum plans are AV 90 percent – lower than the highest level of CSR, available to those with incomes under 150 percent FPL.

The Silver plan holder featured in the NPR/KHN story, Renee Mitchell of Stone Mountain, Georgia, apparently earns too much to qualify for CSR – or else she qualifies for the lowest level, AV 73 percent. That doesn’t mean that her plight is not real, and common – and all the worse for Bronze plan buyers. But it shouldn’t be presented as the norm for Silver plan buyers.

Let’s look at how Ms. Mitchell’s situation would play out at different income levels. Ms. Mitchell needs eye surgery that she previously put off. She has $20,000 in previous medical debt and is now insured under a Silver-level plan. We’re told, “If she undergoes that eye surgery … she’ll owe another $4,000 – the deductible for the operation.”

It’s not clear exactly what that means. Overall deductibles in this area are unusually high, but the coinsurance for outpatient surgery in several plans I checked was independent of the deductible, ranging from 20 to 30 percent for Silver plans unenhanced by CSR. Unfortunately, detailed plan summaries on healthcare.gov don’t adjust for CSR level. But let’s look at overall deductibles and maximum copayments on one Silver plan at different income levels.

In states that did not expand Medicaid – and Georgia is one – 68 percent of all plan buyers had incomes under 200 percent FPL. 50 percent had incomes under 150 percent FPL – that is, under $17,505 – qualifying them for Silver plans with AV 94 percent. In Georgia, the percentage of low-income buyers is likely to be even higher, as 91 percent of all buyers qualified for some kind of subsidy – sixth highest in the nation.

Ms. Mitchell is not unusual. But she’s not typical – and especially not typical of Silver plan buyers.

Underinsurance in the U.S. is a major problem, and it’s a problem for many buyers of private plans on ACA exchanges. But underinsurance on the exchanges needs to be placed in context.

That’s a lot of people paying a lot out of pocket. At the same time, 56 percent of plan buyers on ACA exchanges have plans with an actuarial value above 80 percent – that is, Silver with strong CSR, Gold or Platinum. And that includes more than two-thirds of Silver plan buyers. It’s misleading to suggest that Silver plans carry high deductibles and out-of-pocket costs as a matter of course.

There’s one more unaddressed issue in the Renee Mitchell story. We’re told that her plan premium went up $100 from 2014 to 2015. That must mean that it’s undersold by a lot of plans, which may have better terms as well as lower premiums. The imperative to shop yearly for the best deal is arguably a weakness in the ACA. But it also constitutes an opportunity for those who get in the shopping habit.

* According to the latest enrollment snapshot from the Center for Medicare and Medicaid Studies (CMS), 57.4 percent of all enrollees (5.85 million) accessed CSR, while 6.90 million bought Silver.

**  According to the March 2015 ACA enrollment report, 82% of all buyers in the 37 states using HealthCare.gov with incomes qualifying them for CSR had incomes under 200 percent FPL. The percentage of those who actually accessed CSR by buying Silver plans would be higher, as lower percentages of those in the 200-250 percent FPL range choose Silver. At the same time, the percentage of buyers with incomes under 200 percent FPL was probably somewhat lower in the states running their own exchanges, as those states are wealthier on average and all but one expanded Medicaid, thus reducing the number of buyers with the lowest incomes.