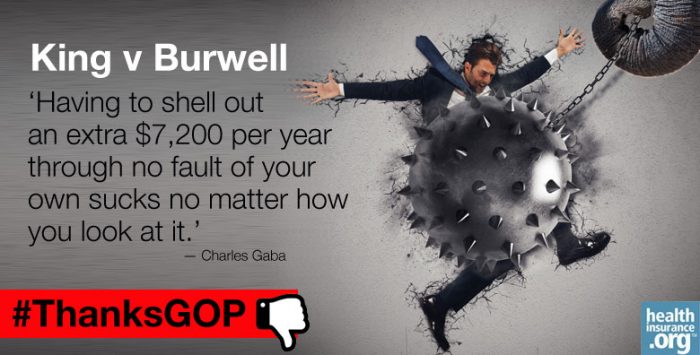 For several months now, various media outlets (including myself) have talked about how many people could lose the federal tax credits provided by the Affordable Care Act and/or with it, their health insurance policies, if the Supreme Court rules for the plaintiffs in the infamous King v. Burwell case. The decision announcement is expected sometime in June, which means that Advance Premium Tax Credits (APTC) could potentially be cut off starting as soon as July.

Most of the estimates have ranged anywhere from 6 to 9 million people across the 34 states which have their ACA insurance exchanges operated via the federal exchange (HealthCare.Gov) instead of via their own “state-based” exchanges. (Three additional states – Oregon, Nevada and New Mexico – are also run via HealthCare.gov, but had their exchanges “established” by those states in a legal sense, so are supposedly in the clear.)

Unfortunately, the actual worst-case scenario is even worse than that. Here’s how it breaks out:

Back in April, I did some rough estimates and concluded that the actual number of people who would lose their tax credits would be roughly 6.5 million total. As it happens, just last week, the Centers for Medicare and Medicaid Services released the actual effectuated enrollment numbers for every state as of the end of March, along with what percentage of the private policy enrollees in each state are receiving federal tax credits. The grand total? 6,387,790.

However, that was only as of March 31. Remember that an additional 147,000 people enrolled via Healthcare.Gov after the official open enrollment deadline using the “tax filing season” special enrollment period. Assuming roughly 3 percent of these were in Oregon, Nevada and New Mexico, that leaves around 142,000 in the other 34 states. Roughly 85 percent of those folks should be receiving the tax credits, or 121,000 … and of those, at least 90 percent, or 109,000 people, should have actually paid their premiums.

* (Yep, I said taxes. The subsidies are in the form of tax credits, so if they have to pay them back, guess what? That’s a tax hike on millions of people).

Number who could lose coverage: 8.5 million

Until now, the numbers have been very clear. Going forward, they start to get a little fuzzier, but bear with me.

Technically speaking, those 6.5 million aren’t losing their policy; they’re “just” losing the subsidies which make the policies affordable. A few percent (perhaps 300,000) have incomes at the upper end of the tax credit range, so losing their credits isn’t gonna break them, although it sure isn’t gonna be fun either. For the other 6.2 million or so, however, this would be devastating. They’d have to almost immediately drop their policies. The “good” news is that they wouldn’t have to pay the shared responsibility penalty (ie, individual mandate) because they’d qualify for an exemption. The bad news is that they’d become completely uninsured.

However, it gets worse. Right now, the insurance companies in those 34 states have around 7.5 million people enrolled through the individual market (whether subsidized or not) via the ACA exchanges … plus an additional 5.5 million or so enrolled directly through the insurance companies (i.e., off-exchange enrollments). That’s about 13 million people in the same risk pool, and at the moment, while it might not be ideal, imagine what would happen if 48 percent of their customers drop out of the market entirely?

Well, in addition to losing half of their customers, they’d also lose a lot of people who are pretty low risk/reasonably healthy. The ones who would stick it out despite the massively increased price would be those who have no choice … basically, those who are very sick/expensive to treat (dialysis, chemotherapy and so on). Those keeping their coverage would be much more expensive to treat, meaning the insurance companies would have to raise their premiums dramatically. How dramatically? Well, the American Academy of Actuaries – not exactly known for panicking or shooting from the hip – recently sent an open letter to the HHS Dept and anyone who would listen warning that:

… Such adverse selection would cause average health care costs, and therefore premiums, to rise. Estimates from the Urban Institute suggest that nearly 10 million fewer people would have coverage in the individual market and the change in the health mix of enrollees would increase premiums by 35 percent in the affected states. Another analysis from the RAND Corporation estimates that eliminating the premium subsidies in all states would result in a premium increase of nearly 45 percent.

That, in turn, means that several million people (the 300,000 I noted above, plus another couple million who are somewhat higher than the credit cut-off point) would also be priced out of the market and have to drop their policies as well. You’re probably talking about another 2 million or so. That’s a total of 8 to 9 million people losing their healthcare policies.

Remember, the total individual market in these 34 states is around 13 million people. I’ve shown how around 8.5 million would lose coverage altogether … but what about the other 4.5 million?

Well, again, they’d see their premiums shoot up a good 50 percent or more. A family of four paying, say, $1,200 a month for a Gold plan will suddenly have to pay $1,800 a month, and so on. People at this income level (say, 500 percent of the federal poverty level or higher) might be able to afford that … but they sure as hell aren’t gonna be happy about it. I don’t care how much you make: Having to shell out an extra $7,200 per year through no fault of your own sucks no matter how you look at it.

I should also note that there’s other possible fallout here. Some of the insurance companies might decide to pull up stakes in the individual market completely, leaving their enrollees high and dry, reducing competition and driving up rates even further. However, that might already be accounted for in the Urban Institute and RAND studies, so I’ll leave it at that.

So. That’s about 8.5 million people losing their healthcare coverage completely, and another 4.5 million having to pay exorbitant prices to keep theirs. Is that the worst of it? Hopefully. However, there’s one more possibility which would be truly devastating:

The Consequence Whose Name We Dare Not Utter

I debated for a long time about whether to talk about this or not, because on the surfact it seems pretty far-fetched. However, as I noted at length a few weeks ago:

A few months back, I made a bad joke by suggesting that if they do decide to effectively destroy the lives of up to 14 million people, the SCOTUS “might as well go ahead and make the ruling retroactive while they’re at it” by forcing the IRS to collect back the billions of dollars in tax credits which have already been given out over the past year and a half to millions of folks (some of whom aren’t even enrolled via the ACA exchanges anymore).

Well, guess what? It turns out that this may very well be the case after all. Without getting too deep into the weeds here, it’s conceivable that if the Supreme Court rules for the plaintiffs in the King case, the IRS might be required to do exactly that: bill every single person who’s received tax credits for their ACA policies dating back to January 2014 the full amount. In some cases this could be as much as $4,900.

Nicholas Bagley, a law professor at the University of Michigan and one of the experts on the ACA and King v. Burwell in particular has reassured me that this is such a remote possibility as to be barely worth worrying about. I certainly hope he’s correct.

However, the fact remains that a good 13 million or more people could be about to face financial chaos and genuine medical danger … all because a guy at the CATO Institute found a typo and the Republicans running Congress are too bull-headed to take five minutes out of their day to scribble “… or the federal government” next to one sentence on a 900-page document.