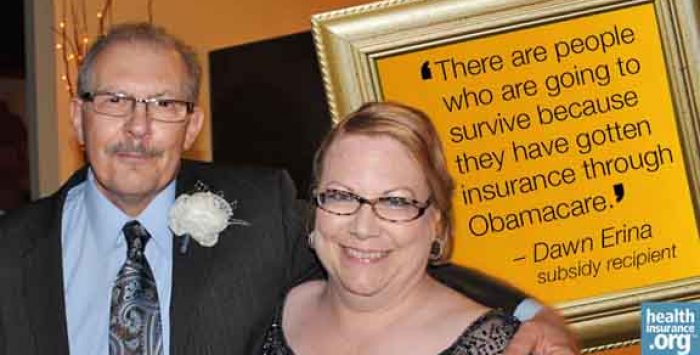 Leonard and Dawn Erina have worked hard all their lives, wanting to provide for their family and eventually enjoy their retirement. But as that day approaches, the dream of retirement may be harder to achieve than they ever thought.

That’s because the Erinas are among the estimated 8 million Americans who stand to lose the tax subsidies they receive under the Affordable Care Act (also known as Obamacare) to help them pay for health insurance. It all hinges on the King v. Burwell case, which challenges the legality of tax subsidies for people who bought insurance through the federal Healthcare.gov marketplace. A decision is expected in June.

“The tax credit makes a huge difference for us and I’m not sure what we’d do without it,” Dawn says. “Never in our wildest dreams could we pay for health insurance without tax subsidies.”

Leonard and Dawn, who are age 64 and 59 respectively, didn’t plan on Leonard retiring early. But when he lost his job and couldn’t find another, they didn’t have a choice. Dawn works part time, but doesn’t make nearly enough to pay full price for health insurance.

The Silver plan the Erinas purchased through HealthCare.gov would have a monthly premium of $1,131 without the help of tax credits totaling $853, which is based on their income. Their monthly premium is now just $278.

“That $1,131 premium is about $110 less than Leonard’s monthly Social Security check,” Dawn says. “We could maybe get groceries for a week with what’s left if we didn’t have tax subsidies.”

Couple knows what it’s like to go without coverage

Dawn knows what it’s like to live without health insurance, because it’s something she had to do in the past.

“I simply would not seek care until I got so sick I couldn’t function, which can turn something minor into something bigger, like a sinus infection and then bronchitis,” Dawn says. “Now that I can go to the doctor and not worry about my co-pay – which is just $20 – I’m seeking treatment sooner and staying healthier. Last winter, I wasn’t prone to the kind of knock-down, drag-out flu sickness I usually get, because I’m getting better preventive care.”

Then there’s the cost of medications, which would be out of reach for them without insurance. Leonard and Dawn take 19 different medications every day for the 14 pre-existing conditions they have between them, ranging from allergies to heart disease. Having a constellation of health conditions at their age isn’t unusual, but going without their medication could put their health in jeopardy.

“If we didn’t have our medications every day, I don’t know how long we’d last,” Dawn says. “We’re not playing here.”

It’s not just check-ups and medications, either. Earlier this year, Dawn needed minor hand surgery, which she was able to afford, along with physical therapy, thanks to their insurance. Without the surgery, she would have had trouble doing her job and earning the income she and Leonard need.

What’s at stake for 8 million?

Neither one of them can understand why anyone would want to pull the rug out from under millions of Americans, including many who finally have insurance for the first time. Dawn knows what’s at stake.

Since signing up for insurance under Obamacare, Dawn has been making sure people understand the truth about how it works – and how it helps. She gets frustrated when people complain to her about having to pay a little more for their insurance now.

“A lot of times, when people’s premiums went up because of Obamacare it’s because the insurance they had before didn’t cover things that have to be included in health insurance now – things you need, like annual physicals and cancer screenings,” she says. “Not having a Pap smear or mammogram when you should could lead to a catastrophe.”

The Erinas believe that helping others is part of what America is all about, and it’s certainly part of Dawn’s Catholic faith.

Ultimately, Dawn adds, she’s grateful for the tax credits that make having health insurance possible. “I’m hopeful the Supreme Court won’t take these tax subsidies away,” she says. “It would put us into a tailspin.”