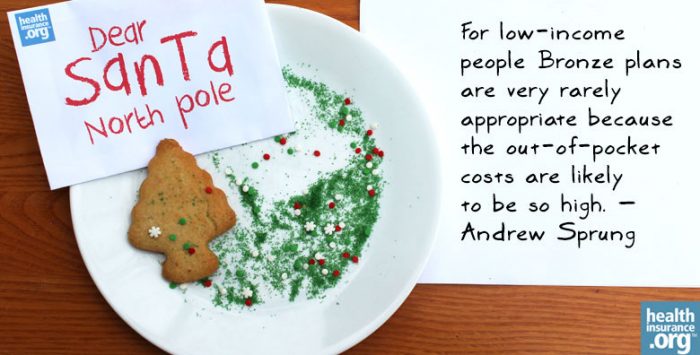 And you know healthcare reform, we’ve come a long way just in the last few years in this country, but there are still changes and improvements that could be made that would make affordable healthcare more accessible to more Americans.

So today I’m with Andrew Sprung. He’s a freelance writer who blogs about politics and healthcare policy at xpostfactoid.com and also writes at healthinsurance.org and he’s written about the ACA for The Atlantic and The New Republic. He’s a very widely published author. So Andrew, what’s your request for Santa?

Andrew Sprung: Well, my wish is that cost-sharing reduction subsidies could be available with plans that have lower premiums. As you know Louise, cost-sharing reduction subsidies are available to lower-income buyers on the ACA exchanges. They’re a kind of secondary subsidy that quite strongly reduce deductibles and copays and maximum out-of-pocket costs.

They’re strongest for people under 200 percent of the federal poverty level, which is about $23,000 for an individual and a bit shy of $60,000 a year for a family. But one very important feature of them is that they’re only available with Silver level plans … the second cheapest level in the exchanges. It’s very good that they’re there because deductibles throughout the exchanges in all levels are pretty high, but Silver plans can be quite expensive for lower-income people.

If you’re single and earn say $23,000 a year, regardless of your age, the second-cheapest Silver plan will cost you $118 a month. That’s a lot of money on that income and Bronze plans can be quite tempting because their subsidies are much lower. They might be for that same person $75 a month … they might be $50 a month. If the person is older, they might even be zero dollars a month. There may be no premium.

The catch, though, is that Bronze plans have very high deductibles … usually around $5,000 or $6,000 per person and most of them have very minimal benefits before you reach that deductible. So it seems to me that if the cost-sharing reductions could attach to the Bronze plans, they wouldn’t reduce the deductibles to the level that they do now with Silver but they could reduce them proportionately.

But it would create a more viable choice for people between Bronze and Silver. As of now I think for low-income people Bronze plans are very rarely appropriate because the out-of-pocket costs are likely to be so high.

Louise: I agree. I think that would be a great addition to the ACA and it would help to mitigate the problem we have now where some people don’t even know about the cost-sharing reduction subsidies or don’t find them because the exchange might just display the lowest-cost plan first … which would be the Bronze plans … and some people scroll far enough to see the Silver plans and just aren’t even aware that they could get those subsidies.

So tacking on some kind of cost-sharing reduction subsidies to Bronze plans could really help just to help make sure that people who really need those subsidies are finding them and getting them.

Andrew: That’s a really good point. And the exchanges vary quite a bit in how good a job they do at making people aware of CSR and in some cases pointing them to Silver plans if they qualify for it. The good news is that most people who qualified for CSR did buy Silver but a significant number didn’t. If CSR attached to Bronze then that problem would pretty much go away.

Andrew: There’s a catch to this wish, which is that it would have to be done by a legislative change. The Department of Health and Human Services couldn’t just do it by fiat. Congress would have to decide – which means Congress as a whole would actually have to be trying to make the Affordable Care Act better.

Andrew: Absolutely. Maybe it’ll take him a decade or so.

Louise: Well, thank you very much, Andrew. Happy holidays to you. Great talking with you.

Andrew: You too, Louise. Take care.