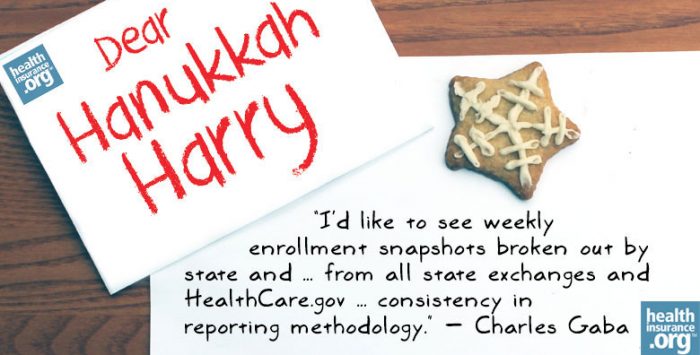 In this segment: Charles Gaba, a healthinsurance.org contributor and founder of ACAsignups.net – the only place where consumers can consistently follow updates on ACA enrollment. See previous letters from Andrew Sprung, Joanne Boyer, Harold Pollack, Wendell Potter and Linda Bergthold.

Louise Norris: Hi there. My name is Louise Norris and I write about healthcare reform for healthinsurance.org and since it’s the holiday season, my fellow writers and I have teamed up to write a letter to Santa – or in this case a letter to Hannukah Harry – asking for some improvements and some changes to healthcare reform and to the Affordable Care Act to make health insurance and healthcare more accessible to more Americans.

And so today, I am with Charles Gaba, who is a web designer by trade but he’s also the founder of ACAsignups.net, which has been a go-to resource for me over the last year and has generated a ton of media interest. He’s been cited in the Washington Post, Forbes, New York Times … widely regarded as the most accurate source for up-to-date ACA enrollment data.

So with that, welcome Charles, and what would you like from Hanukkah Harry this year?

Charles Gaba: Well, thank you. Well, yes, as you noted, I’m sort of the numbers guy for the beancounter group here and my big focus is on the actual enrollment numbers across the various state exchanges as well as HealthCare.gov.

So what I’d like from Hannukah Harry this year … or going forward … would be I know that recently HealthCare.gov has finally started issuing weekly snapshot reports that have given sort of a total number of plan selections and so on. I’d like to see those weekly snapshots – while that’s a very good start – I’d like to see those broken out by state if possible on a weekly basis.

And in particular – and this applies all of the state exchanges and HealthCare.gov – I’d like some consistency in the actual reporting methodology.

For example, some of the state exchanges are reporting new enrollees and renewals as a single number, some of them aren’t breaking them out, some are only including one or the other. Some are including Medicaid and CHIP enrollment figures, some aren’t. Some are mixing those together with the private policies.

Some of them don’t report Medicaid at all.

I think daily might be pushing it, but weekly seems pretty reasonable to me. Ideally, I’d like them … all of the exchanges … to release their data on the same day each week so that there’s consistency in terms of what you’re comparing the numbers against. For example, this last weekend – which was the big December surge – there’s a big difference between a number that comes out on Friday and one that comes out on Sunday or Monday.

And finally, I’d also love it – and this is a general purpose thing for the entire Health and Human Services department and all of the state health departments – I’d love it if you could standardize your terminology in particular when it comes to Medicaid. I did not know until about a year ago when I started this that Medicaid has a different name in every state. A lot of people don’t know, like I didn’t, that MassHealth in Massachusetts IS Medicaid … or MediCal IS Medicaid … or whatever … Green Mountain Health … or whatever they call it in different states.

Louise: I think that all sounds excellent: more standardization, more transparency would be perfect. If Hanukkah Harry is feeling especially generous, it would also be great if we had some standardization, reporting from carriers in terms of off-exchange enrollments.

Louise: That would great for just for getting a concise picture of how the uninsured rate is falling, and you know it would be …

Louise: Excellent requests, Charles, and hopefully Hanukkah Harry will come through for us.

Louise: Thank you. Great talking with you.