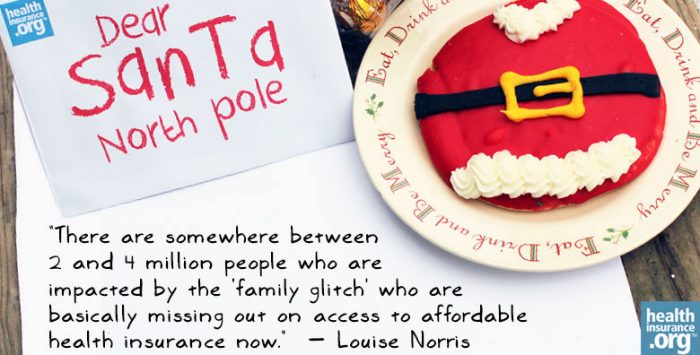 In this segment: Louise Norris, blogger for healthinsurance.org and Colorado Health Insurance Insider, and author of the FREE Insider’s Guide to Obamacare’s Open Enrollment, wraps up our Letters to Santa series with her own request. Watch previous “letters” from bloggers Charles Gaba, Andrew Sprung, Joanne Boyer, Harold Pollack, Wendell Potter and Linda Bergthold.

Andrew Sprung: Hello. My name is Andrew Sprung. I write about health insurance and the rollout of the Affordable Care Act at healthinsurance.org and on my blog xpostfactoid.

I’m here with Louise Norris … also a writer at healthinsurance.org … and Louise brings a broker’s perspective to her writings about the ACA and about health insurance. She’s been a licensed health insurance broker … in business with her husband in Colorado … since 2003.

Louise is also the author of a free eBook … the Insider’s Guide to Obamacare Open Enrollment … available at healthinsurance.org. I’m here to ask Louise what her wish to Santa would be for the Affordable Care Act. How could it be improved if we could just do it via wish and not have to work through Congress for example. So Louise, what would you do?

Louise Norris: Thank you, Andrew. You know the Affordable Care Act has done so much to make health insurance more affordable and more accessible for millions of Americans. But one thing I would wish from Santa would be to fix the “family glitch.” The family glitch exists be of the way “affordable” is defined under the law. If you have access to employer-sponsored health insurance that is considered affordable, then you’re not eligible for subsidies in the exchange. And for the most part, that makes sense.

If you have to pay less than that amount to get health insurance just for yourself as an employee, then your coverage is considered affordable and if your spouse and kids can enroll in that plan, technically, they are also deemed as having access to affordable coverage regardless of how much you would actually have to pay to add them to that plan.

And so people in that situation might find that it’s very affordable to just cover the employee under the employer plan but then when they tack on the spouse and kids all of a sudden they’re looking at a much more significant chunk of their income having to go to health insurance and the spouse and kids are not eligible to go in the exchange and get a subsidy. They don’t have to take the employer-sponsored plan, but their only choice if they want to buy their own is to pay full price.

And so this disproportionately impacts lower-income families because it’s a higher percentage of their income they’d have to pay to buy coverage through the employer plan and because their benefits typically aren’t as rich when you have a lower wage.

Andrew: So a lot of lower-income families are really stuck. For practical purposes, the employer plan is not affordable but it’s alleged affordability for the one employee knocks them out of eligibility for a subsidy. What would be the best way to fix this?

Louise: The best way to fix it would be just changing the law to make it so that the definition of affordability is based on what the employee actually has to pay … you know payroll deduct … to get coverage for the employee and whatever family members they need to add to the plan.

So if the total cost that the employee is paying each month to cover their family is less than say 9.56 percent of their income, then that coverage would be considered affordable and they’d take it, but if the total cost once they tack on family members was more than that percentage of their income, then they should be allowed to go into the exchange for those family members and get subsidies.

Senator Al Franken has introduced a bill in 2014 that would do exactly that … that would base the definition of affordability on what you actually pay for your coverage … not just what you would pay for just yourself but instead on what you pay for your whole family. It obviously hasn’t passed yet, but that would be my wish from Santa.

Andrew: I guess it would cost some money because people who are right now not eligible for subsidies would be. It would help fulfill the law’s purpose.

Louise: Absolutely. There are somewhere between 2 and 4 million people who are impacted by it who are basically missing out on access to affordable health insurance now because of the family glitch, so yes, it would cost money and subsidies but it also fulfill the law’s intent which is to make coverage accessible and affordable for as many people as possible.

Andrew: Well, I guess since everything that Congress does … first of all they have to want to make the Affordable Care Act better … which Republicans don’t want to do and second of all, everything that costs money has to be paid for in some way. I guess that’s where Santa comes into the picture.

Louise: That is where Santa comes in. So if Santa can help out Senator Franken and the rest of the Democrats, that would be great.

Andrew: Yeah … and not to mention the 2 or 3 million people left out in the cold.

Andrew: All right well thank you very much. Santa, I hope you’re listening … and have a great holiday and New Year.

Louise: Thank you. You, too, Andrew.