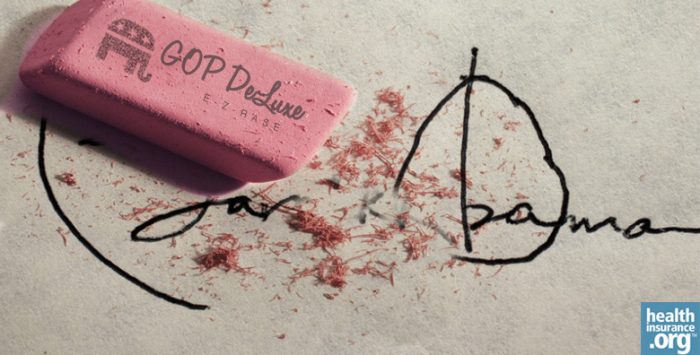 Even though Republicans will soon control both houses of Congress, don’t expect that Obamacare will go away. You can expect, though, that it will be tweaked. And I’m betting that when all is said and done, GOP Congressional leaders will declare victory, and even conservatives will come to accept it.

Even though Mitch McConnell of Kentucky, who will replace Harry Reid of Nevada as leader of the Senate, has said that he thinks the Affordable Care Act should be removed “root and branch,” he knows that won’t happen as long as Barack Obama is president.

Yes, bills undoubtedly will be introduced yet again in both the House and Senate to repeal the law. And yes, the House bill will pass. The Senate bill won’t, though, because Republicans won’t have enough votes to overcome an almost certain Democratic filibuster. And even if a bill to repeal the law actually made it to the White House, Obama would veto it.

McConnell knows that, which is why he said after it became clear that his party would take control of the Senate that there were a few things Republicans would focus on to change the law.

The three things he mentioned in an interview Wednesday were repealing the tax on medical devices, returning to a 40-hour workweek (I’ll explain that shortly), and getting rid of the individual mandate. That’s the part of the law that requires most of us to buy health insurance.

Chances are good that the first two will happen. The third – eliminating the individual mandate – will not, primarily because the health insurance industry likes it. Getting rid of it would mean insurance companies would lose billions of dollars in new revenue they started getting as of Jan. 1 of this year when the mandate went into effect.

Another reason that mandate won’t go away is that the law is built around it. It would collapse without it, and Obama and the Democrats won’t let that happen.

I don’t think Republican leaders will lose any sleep because they won’t be able to make fundamental changes to the law despite their control of Capitol Hill. I think that, instead, they will eventually work to persuade us that their tweaks have made the law so much better that even conservatives should come around to embracing it.

As they should. Even now. Without the tweaks. That’s because the law, even as it exists now, benefits as many conservatives as it does liberals. But because of the years-long anti-Obamacare campaign Republicans have waged since the law was enacted, most Americans have come to believe that the law needs to be “fixed.” Not repealed, but fixed. The public is not of one mind, however, about what the fixes should be.

It obviously will take a well-planned communications strategy for Republicans to get conservatives on board after the tweaking has been done. I, for one, believe they’re up to the task. Republicans have demonstrated repeatedly in recent years that they are much more capable than Democrats in communicating in ways that persuade Americans to think and act in ways they want us to think and act. That’s not to say that Democrats don’t try. Republicans have just been better at lately.

Much-loved provisions will be untouched

The parts of the law that really benefit us all regardless of whom you voted for will stay in place. As a reminder, here are some of those provisions.

What these provisions of the law mean for all of us, regardless of political affiliation, is greater peace of mind when it comes to health insurance. We can’t be blackballed by insurance companies anymore. We don’t have to worry about losing our coverage if we lose our jobs or decide to start our own business. We don’t have to worry so much about our kids being uninsured because of the cost of coverage. If we’re on Medicare, we no longer have to consider splitting our pills or even not taking life-saving drugs because of the expense.

And having millions more Americans insured, as they are now because of the subsidies and Medicaid expansion in half the states, also benefits all of us. Why? Because they are more likely to get the care they need in the appropriate setting, not the ER, which is the most expensive setting. When the uninsured can’t pay for their ER care, the rest of us pick up the tab in the form of higher insurance premiums and higher taxes.

‘Fixes’ that could conceivably happen

So what will be “fixed”?

There also are a number of more obscure parts of the law that the GOP will target. They’ll probably try to cut funding for the Patient-Centered Outcomes Research Institute (PCORI), for example, which some medical device makers, drug companies and physician specialist societies don’t like. They worry that if the Institute should rule that some devices, drugs and procedures are not worth the expense, it would have a negative effect on their incomes.

Similarly, funding for the Independent Payment Advisory Board, established to slow Medicare spending, will also be targeted for elimination. Many health care providers don’t like it, either for the same reason they don’t like the PCORI. Decisions made by the board could affect their income.

While those and other provisions of the law could indeed help to slow government spending on health care, look for opponents to mount a vigorous campaign to get rid of them. They’ll work to make us believe that they represent government interference in the patient-physician relationship.

But when all will be said and done, the tweaks will not do great harm to the law. Obamacare will stay on the books. But by the time the tweaks have been done, the term “Obamacare” will fall out of favor. I predict that when the fixes are in, the GOP will rechristen it with a name conservatives can love.

How about the Health Security Act, which is probably what it should have been called in the first place?