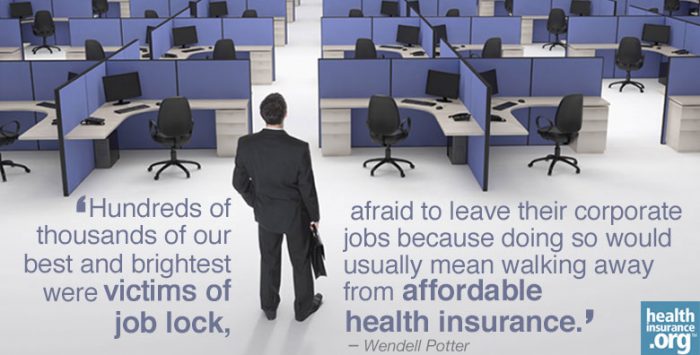 We Americans have short-term memory when it comes to health care. Either that or far too many of us have bought – hook, line and sinker – the false accusations and unfounded predictions about Obamacare we’ve been subjected to over the past five years.

Little wonder when you consider, as I wrote recently, that $418 million has been spent demonizing the law, while a small fraction of that has been spent explaining it and telling people how it can – and does – benefit them.

We weren’t always so negative about reform.

In August 2008, about six months before debate began in Washington on what would become the Affordable Care Act, 82 percent of Americans were so dissatisfied with the U.S. health care system they wanted it overhauled, according to The Commonwealth Fund, which commissioned the poll.

And for good reason.

The cost of health care – and health insurance – was rising so fast that ever-growing numbers of us were winding up in the ranks of the uninsured. Fifty million – one out of every six of us – were uninsured when the Affordable Care Act was signed into law in 2010. That number was projected to grow by several million more over the coming decade if Congress didn’t pass reform legislation.

The main reason so many of us were uninsured in 2010 was that health insurance had simply become a budget-buster for many American families. The cost of employer-sponsored family coverage reached $13,375 in 2009, an increase of 131 percent in ten years, according to the Kaiser Family Foundation.

The growing number of uninsured people was not just a costly inconvenience for those most directly affected. When an uninsured person seeks care in a hospital emergency room and can’t pay the bill, it results in cost shifting. Health insurance premiums are an estimated $1,000 higher than they would be if not for this cost shifting.

For years we have been spending far more for health care – on both a per capita basis and as a percent of Gross Domestic Product, than any other country. The amount we spend per person in the U.S. – $8,745, according to the Organization for Economic Co-operation and Development (OECD) – is at least $4,000 more than the per-capita expenditures in countries that are our global economic competitors, including Australia, Canada, France, Germany, Japan and the United Kingdom.

By spending so much on health care, we have less to spend on things like education, our transportation system and other infrastructure needs. Conversely, other countries can spend more in those areas, giving them a global competitive advantage.

While the percentage of GDP we devoted to health care kept going up year after year, some countries were actually able to take their health care spending in the other direction. Canada, Germany and the U.K. all reduced their GDP spend on health care between 2009 and 2012, while ours went from 17.7 percent to 17.9 percent.

As if that weren’t bad enough, we have continued to trail those and other countries in health care outcome measures, from infant mortality to life expectancy. In other words, the world’s other developed countries spend far less on health care yet have better health outcomes.

Hundreds of thousands were caught in job lock

Our pre-reform system was also hindering our entrepreneurialism. That’s because hundreds of thousands if not millions of our best and brightest were victims of job lock, afraid to leave their corporate jobs to start their own businesses because doing so would usually mean walking away from affordable health insurance. And in a system in which insurance companies could refuse to sell you coverage if you had a pre-existing condition, many would-be entrepreneurs gave up their dreams of starting their own businesses.

Are things really worse now because of Obamacare?

All of this is beginning to change. Health care inflation has started to slow, in large part because of provisions of the Affordable Care Act. For example, the law is saving the Medicare program billions of dollars by reducing the overpayments the government had been making for years to private insurance companies to encourage them to participate in the Medicare Advantage program.

The number of uninsured Americans is expected to fall to 42 million by the end of this year, thanks to the Affordable Car Act. In two years, the Congressional Budget Office projects it will have fallen to 30 million. That’s still far too high – especially when you consider that the other developed countries were able to achieve universal coverage years ago – but without the Affordable Care Act, the number of uninsured Americans would have risen to 57 million by 2022.

And despite what you probably have heard from some politicians and media pundits, the CBO says Obamacare will actually reduce the federal deficit in the coming years. That means that the federal government will be spending less on health care in the future than it would have spend if the law had not been enacted.

Yes, the feds are spending more to bring more people into coverage through the expansion of Medicaid and by providing subsidies to people who otherwise couldn’t afford insurance, those costs will be more than offset by budget savings in Medicare, Medicaid and other programs and by revenues from taxes and fees on some insurance plans, medical device manufacturers and some high income Medicare-eligible earners.

Bottom line: our country will be healthier in the coming years in a number of ways – including fiscally – thanks to the Affordable Care Act.