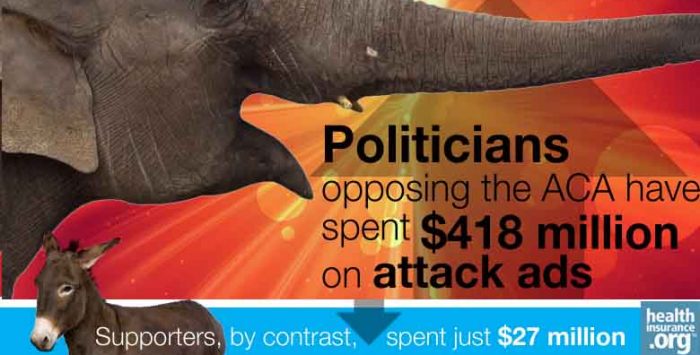 Last November, I predicted that once millions of Americans were able to join the ranks of the insured, the public’s approval of Obamacare would start to go up.

I, of all people, should have known not to go out on such an unstable limb.

As someone whose responsibilities at work once included trying to get people to think, act and vote the way my employers wanted them to do, I should have realized that those who are opposed to the law out of economic self-interest or for political reasons would continue to spend millions to shape public opinion in ways that would benefit them. I would have been on solid ground if I had predicted that.

$418 million in ads to attack one law

As I wrote in this space a few months ago, politicians who want us to believe the Affordable Care Act is not in our best interests had spent $418 million on 880,000 ads attacking the law as of May. Supporters of the law, by contrast, had spent just $27 million on 58,000 ads. That’s a 15-1 ratio.

It’s little wonder, then, that, despite the fact that at least 10 million Americans have gained coverage through the federal and state exchanges since the first of this year, public support for Obamacare has actually declined.

The Kaiser Family Foundation (KFF), which keeps track of attitudes toward the law, reported last month that the number of Americans with an unfavorable view of the Affordable Care Act stood at 47 percent, largely unchanged from earlier in the year. A key reason for the high unfavorable rating is that more people have been persuaded to believe things about the law that are not true.

Among the misperceptions: that the newly insured had to enroll in a single government plan. A fourth of those polled believed that. Those folks undoubtedly have accepted as gospel the deceptive talking point that Obamacare was a “government takeover of health care.”

What is true is that the law served as a catalyst for more competition among private insurance companies. It did not create a government-run “public option,” as many health care reform advocates had hoped. Consequently, the people who bought coverage through the new insurance marketplace enrolled in one of hundreds of health plans offered by private insurers. Others became insured because their states decided to expand the existing Medicaid program to encompass more low-income individuals and families.

Yet only 39 percent of Americans knew that the uninsured had numerous options available to them and that those options did not include a new government-run plan. Thirty-eight percent said they didn’t know.

Part of the blame for the public’s misperceptions and lack of awareness has to be laid at the feet of the Democrats who voted for it but have been reluctant or unwilling to explain why they voted for it and what it actually does to help not only us as individual Americans but also our country.

Part of the blame also has to go the media, which have failed in setting the record straight and in helping people understand how the law really affects us. Reporters focus their attention on things that go wrong – like the glitches that plagued the exchange web sites for several weeks last fall – rather than the things that go right.

It has always been this way, of course. We’ve been told every evening for decades about the handful of accidents on the freeway, not about the millions of us who got home without incident. “If it bleeds, it leads” has long been the operating principle of American TV news.

Consequently, we are left largely on our own to ferret out the truth and to understand the motivations of the politicians and their corporate benefactors who continue to spread fear, uncertainty and doubt – “FUD” for short – about a law that, in reality, gives us much greater peace of mind when it comes to being certain that we will be able to get the care we need when we need it and at a price we can afford.

Instead, because of the ongoing FUD campaign, we’ve been led to believe that, if we were already insured, as most of us were and still are, the law has taken something away from us or is the main reason our premiums have gone up. The FUD campaign purposely obscures the fact that we were all at risk of losing our coverage if we got laid off or became seriously ill.

And it purposely obscures the fact that we were being hit with double-digit premium increases on a regular basis during the years before Obamacare. We’ve forgotten – or more likely, never informed – that the average premium for employer-sponsored family coverage rose 131 percent, from $5,791 to $13,375, between 1999 and 2009, the year before the Affordable Care Act became law.

Knowing from my previous career how susceptible people are to PR and advertising campaigns designed to instill fear, uncertainty and doubt, I’m certain many of you are probably rolling your eyes right now, if you’ve made it this far. Many of us have long ago accepted as a tenet of faith that “Obamacare” is a big government program that benefits the unworthy at our expense and that we – and generations after us – will pay higher taxes and premiums as a result. That it somehow is destroying what we had been led to believe, erroneously, was the “best health care system in the world.”

We’ve been misled about “Obamacare” so relentlessly for so long – by people in politics and the media we trust but who in reality have been influenced by the special interests that would profit from a repeal or weakening of the law – that we simply cannot believe that we have gained anything from it, much less peace of mind.

If 77 percent of us either believe that the newly insured had to enroll in a single government plan or don’t know that it’s not true, it’s understandable why so many of us are clueless about how the law protects and benefits us. But it does in many ways. Here are just a few ways it would give us all greater peace of mind if politicians and the media were more forthcoming with us:

… while reducing healthcare costs for us all

All this sounds good, you might be thinking, but won’t it bankrupt the country? It’s true that additional federal spending is necessary to pay for the premium subsidies and Medicaid expansion.

But by bringing more people into coverage so that they can get the care they need, including preventive care, in settings more appropriate than the hospital emergency room, and by paying doctors and hospitals in ways that encourage more effective, cost-efficient care and that discourage unnecessary and often harmful tests and treatments, Obamacare will actually lead to a reduction in federal health care spending over time.

While the law is far from perfect, it does much more than most folks realize to give us the peace of mind we deserve when it comes being able to afford the care we need. Most Americans, even though they have been misinformed and ill informed about Obamacare for years now, seem to get that on a gut level, which is encouraging.

The good news from that Kaiser Family Foundation survey was that more than six in ten of us want to keep the law in place rather than see it repealed. What we want is Congress to improve it, not get rid of it.

In my next column, I will address how the law affects us as a society and nation.