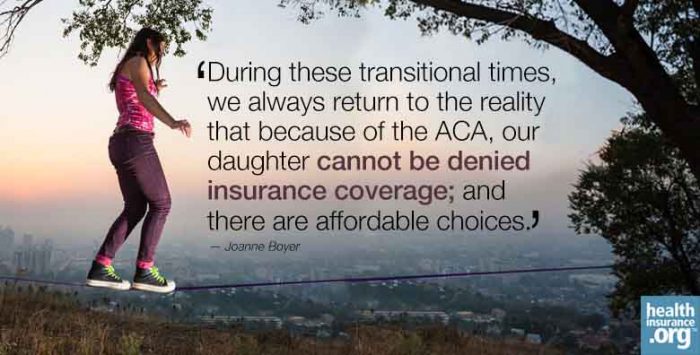 If you’re a parent, you know the feeling of wanting to help when your children struggle with the occasional challenges of moving into adult life. You’ve loved them, encouraged them, fed them, educated them, and watched as they try to make it in the work-a-day world of a less-than-ideal job market and economy. Many of us are faced with watching our children take part-time work or temporary work as they hunt and peck for permanent positions. Often times they move from city to city – or move back home – after they finish school and until they find stable employment.

And, if your child is over age 26, you may find yourself in constant conversations with them over just what their options are regarding health insurance during these transition phases of their careers – especially outside of the official open enrollment period to purchase health insurance. Open enrollment for 2015 coverage begins November 15, 2014 and runs through February 15, 2015.

The provision allowing children up to the age of 26 to stay on their parents’ health insurance plan remains one of the most popular features of the Affordable Care Act. And rightly so. Current Bureau of Labor statistics indicate the unemployment rate for those ages 20-24 is 10.6 percent. And for those ages 25-34, it hovers near 7 percent.

Because employment and health insurance are so coupled, if you’re a parent (like I am) when your child is unemployed, underemployed, between jobs or facing job transition, the question of what to do about insurance coverage during a qualifying event in their lives takes on added meaning.

A qualifying event as defined by the ACA is: “A change in your life that can make you eligible for a special enrollment period to enroll in health coverage. Some examples of qualifying life events are moving to a new state, changes in family size (including marriage, divorce, or the birth or adoption of a child), and loss of other health insurance coverage.

It’s important to remember that because of the ACA, there are options for these “young adults.” For us, our 29-year-old daughter lost her employer-based coverage on August 31, when her one-year job assignment ended. As of today, it’s unclear just when her next full-time job with health insurance coverage will materialize.

She’s cobbling together part-time work in various cities as she waits for what will be her best chance at obtaining a full-time job in her field (in the fall of 2015.) Yet, once she lost employer-based coverage, she was still eligible to enroll in an ACA-compliant plan (on or off-exchange) up until the end of October because loss of other coverage is a qualifying event that triggers a 60-day special enrollment period.

During these transitional times, we always return to the reality that because of the ACA, our daughter cannot be denied insurance coverage; and there are affordable choices. It can be a bit tricky to work through the options, but there are options. And “rolling the dice” and hoping she wouldn’t need to see a doctor becomes far less attractive now that the ACA is here.

In fact, a recent study has shown how Millennials have embraced the ACA. Newly released U.S. Census data shows that the number, and rate of young adults, who lack health insurance has fallen significantly since the ACA became law in March 2010. An estimated 3.9 million more 18- to 34-year-olds were insured in 2013 than in 2009. In fact, the reports does not include much of the 2014 open enrollment period, meaning that numbers could improve.

“We’ve known for a long time that if you give Millennials options for quality, affordable health insurance, they’re going to enroll. Uninsured young adults know that they’re just one accident or illness away from a medical and economic catastrophe,” writes Tom Allison, Policy and Research Manager from Young Invincibles.

“If anyone has experienced a qualifying event – such as loss of coverage – under the ACA, they can apply for an ACA-compliant policy (on or off exchange) during your special open enrollment period, which typically lasts for 60 days,” said Louise Norris, a Colorado-based independent insurance broker.

Another option is short-term health insurance policies, Norris pointed out, which can provide up to six months of coverage in most states. Short-term major medical may not be available in all 50 states.

Norris cautions that “short-term policies aren’t considered minimum essential coverage. That means that unless the individual is exempt from the ACA’s shared responsibility provision (individual mandate), they will be assessed a penalty for the time they are covered by a short-term policy.” A great list of the pros and cons of purchasing short-term plans can be found by clicking here.

So, although our children face a less-than-ideal job market right now there are options for health insurance coverage. With all that’s on their minds (and ours) at this time, let’s not forget that the ACA allows for special enrollment periods and that short-term plans can take away the worry of further financial burdens because of any health-related issues.