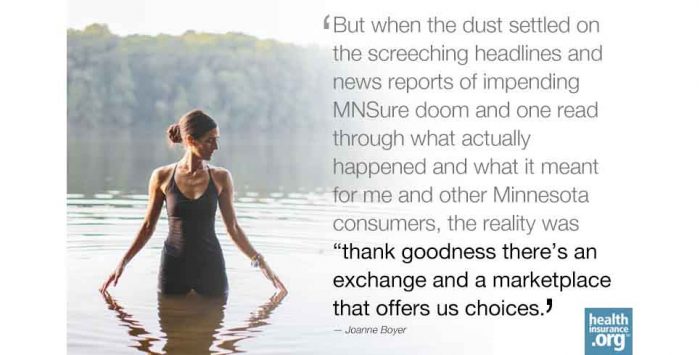 That’s the message for those of us in Minnesota who enrolled in MNSure – the state’s Affordable Care Act health exchange – and chose PreferredOne as our health insurance provider in 2014. Earlier this week, it was announced that PreferredOne, MNSure’s leading insurer, was pulling out of the online marketplace for 2015. As a PreferredOne subscriber through MNSure who did not receive federal subsidies, my knee-jerk reaction was panic.

But when the dust settled on the screeching headlines and news reports of impending MNSure doom and one read through what actually happened and what it meant for me and other Minnesota consumers, the reality was “thank goodness there’s an exchange and a marketplace that offers us choices.”

Reminded of the ‘bad old days’

Before the ACA, a policy cancellation notice would have left many of us scratching our heads and wondering what to do next for health insurance coverage. In fact, many of us would have known the terrifying reality that no coverage was possible if we had pre-existing conditions.

But, because of the ACA, it means that we here in Minnesota still have access to health insurance via four other health plans on the exchange when open enrollment begins in November. (The other carriers include: HealthPartners, UCare, BlueCross and BlueShield of Minnesota, and Medica.)

Why did PreferredOne – a relative newcomer to the state’s individual health insurance marketplace – decide to leave? At this point, their executives have maintained a “No comment” position. Industry analysts have suggested that the company may not have had the resources to handle the influx of new customers. Others suggested PreferredOne priced its plans too low and realized that the only way to compete in 2015 was to show a significant rise in premiums.

Or as Jennifer Schultz, an economics professor at the University of Minnesota-Duluth and a 2014 candidate for the Minnesota House of Representatives said, “The Affordable Care Act and MNsure are programs based on market capitalism. In market capitalism, we expect that some players will find difficulty in competing and make mistakes. We expect the market to weed them out.”

What it means for PreferredOne customers

What does it mean for me and the approximately 10 percent of the 327,000 Minnesotans insured through MNSure via PreferredOne?

Exit from exchange isn’t the norm

In reality, the news on MNSure appears to be the exception – not the norm – around the country. New Hampshire, Washington and Michigan are all adding four carriers, and five new carriers applied to participate in Indiana. In Kentucky, Kynect is adding two new medical carriers and two new dental carriers. Even mega-giant United Healthcare is joining the exchange in Georgia and will offer statewide coverage along with three other plans. (Only one of them offered statewide coverage in 2014).

United’s Chief Executive Stephen Hemsley said the company – which largely sat out participation in the ACA’s exchanges nationwide in 2014 – has learned about pricing, regulations and consumer attitudes while taking a “prudent first-year position” on the public exchanges. He suggested that, as more people use the exchanges in 2015, the risk will go down for insurers.

As long as health care delivery in this country remains marketplace driven, we can expect the fluctuations of the marketplace to impact how we access health insurance. As consumers we need to stay informed and stay focused. And to remember that, thanks to the ACA, we don’t have to panic.