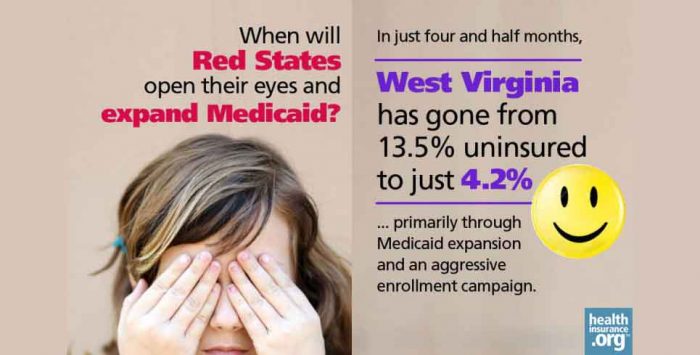 In states that have expanded Medicaid, navigators have something to offer nearly all of the people who come to them for help. It may not always be the perfect solution, and some people still struggle to afford health insurance in those states. But the most financially vulnerable citizens are generally eligible for Medicaid or significant subsidies.

But in states that have not expanded Medicaid, the opposite is true: the people who most desperately need help paying for health insurance – those with the lowest incomes – end up in the coverage gap, not eligible for Medicaid and also not eligible for any subsidies to help them pay for a private plan.

Navigators describe the experience as heartbreaking when they have to explain to some of the poorest residents in their state that nothing has changed for them – they’re still on their own when it comes to health insurance. For most people in the coverage gap, that means remaining uninsured, simply because nothing else is financially feasible.

‘Too poor for ACA help’

Jan Plummer is the Navigator Program Coordinator at Mountain Projects, serving the seven western-most counties of North Carolina. She explains that in her region, “a large share of people are too poor for ACA help.” As odd as that may seem to those who are unaware of the coverage gap in states that aren’t expanding Medicaid, it’s routine in states like North Carolina. Roughly 35 percent of the people Plummer has worked to help during open enrollment have had incomes under 100 percent of federal poverty level (FPL), meaning they fall into the coverage gap.

When the ACA was signed into law, it included a provision to expand Medicaid in every state, up to 138 percent of FPL. But the Supreme Court ruled that states could opt out of that part of the law, and nearly half the states did so. North Carolina has not expanded Medicaid, so eligibility is based on the existing state rules.

Unless an applicant is disabled or blind, Medicaid is not available at all to childless adults in North Carolina, regardless of how low their income is. For parents with minor children, Medicaid is only available if household income does not exceed 46 percent of FPL ($10,971 for a family of four). And subsidy eligibility in the exchange starts at 100 percent of FPL; it doesn’t go lower than that because the way the law was written, everyone under that level was supposed to get Medicaid.

Plummer and her fellow navigators always explain the catastrophic plan options (available to anyone who qualifies for a hardship exemption, which includes virtually everyone in the coverage gap), but she said “nobody can afford them” if they have an income below poverty level.

‘Rooting out all sources of income’

Plummer explained that a big part of her job when people are in danger of falling into the coverage gap is rooting out all sources of income. Some people sell vegetables at a roadside stand, some babysit, some do odd jobs – it all adds up, as long as the residents keep good records.

She described a gentleman whose regular income was under poverty level. But he had turned his beekeeping hobby into a small side business, and was earning a little extra money selling honey. He was afraid to report the income from his honey sales however, because he worried that the tough winter might mean that the bees wouldn’t survive and his sales may not be as strong this year.

He wondered what would happen if his honey income made him eligible for subsidies, but then his total earnings for the year ended up lower than anticipated. Would have have to pay back the subsidies? (No.) Ultimately, by reporting all of his income, he was able to qualify for a significant subsidy in the exchange.

But Plummer also noted that for a lot of the people she helps, even a heavily subsidized policy might still be a budget-stretcher. Especially for families with incomes between 100 percent and 150 percent of FPL, even $20 or $30 per month to pay for health insurance is tough to find. These are families that are struggling to make ends meet, and there simply isn’t any wiggle room in the budget. (This makes a great case for the ACA’s Basic Health Programs, which haven’t really caught on yet, but could see growth in the future.)

Falling into the ‘coverage gap’

Navigator Grayson Price works four days a week at the Crisis Assistance Ministry in Charlotte, North Carolina. Nearly one out of every four consumers he assists falls into the coverage gap, but that’s a low-end figure, because as he explains, “there are undoubtedly thousands more in the area who are either unaware of the law, unaware that they need to take some action, or already know that they do not qualify, and thus, are not seeking help.”

None of Price’s consumers who fall into the coverage gap have purchased full price insurance, simply because they cannot afford to do so. And Price’s experience with catastrophic plans is the same as Plummer’s: Even though the catastrophic plans are less expensive than metal-level plans, they’re far out of reach for people living below poverty level.

When Price explains to his lowest-income consumers that they are not eligible for any assistance, their reactions “vary from weary resignation to anger, but most consumers are not aware that North Carolina did not expand Medicaid. A lot of these people have already been denied from other services, so it comes as no surprise that they are not eligible for yet another program.”

He goes on to explain that the national ACA marketing adds some complications in states like North Carolina that didn’t expand Medicaid, since the message on the national level is usually along the lines of “affordable health care for everyone.” Price says that he and his fellow navigators constantly have to add qualifiers to that concept, letting people know that the state chose to go in a different direction. He notes that “many consumers, and understandably so, do not understand how something that was touted as benefiting them leaves them out in the cold.”

Those who need help most fall into gap

Many of the people Price helps have chronic health conditions that are not being treated because they have no health insurance. And Price describes “the cruel irony” of the fact that the impoverished people who fall into the coverage gap tend to be the ones most likely to need medical treatment for a variety of conditions.

Like Plummer, Price reminds consumers to list all income, including Social Security, disability, unemployment and odd jobs. He recently worked with a woman whose annual income put her about $1,000 under poverty level. After discussing her finances, Price found out that “she regularly cuts hair on the side, to the tune of $100 per month. That extra $1,200 in annual income bumped her over the threshold and she became eligible for a subsidy and cost-sharing reduction. She was able to find a plan for around $20 per month.”

But those happy endings often elude even the most shrewd navigator. If there’s no extra income there to find, there’s nothing they can do to make a consumer eligible for subsidies. So they hunt for other possibilities: If the person is under 26, is a parent’s policy available? Or could a family member claim them as a dependent? Price notes that most of the time, these options don’t work either.

At that point, all the navigators can do is help the consumer obtain a hardship exemption and direct them to local free and low-cost clinics. Plummer does the same thing, and both navigators said that there are numerous clinics available … but they can only provide basic out-patient services. These individuals have no safety net if they need health care more complex than the clinics can provide.

Poorest left to fend for themselves

Plummer and Price are seeing consumers who are working second and third jobs in order to cobble together enough income to put them above poverty level so that they can get subsidies to help purchase health insurance. But second and third jobs are not easy to find. In some cases, no matter how hard a person works, premium subsidies remain out of reach. And unfortunately, in states like North Carolina, Medicaid is also unavailable to them. Sadly, the poorest among us – the ones most in need of assistance – are being left to fend for themselves in nearly half the states.

There is plenty of anti-Medicaid sentiment among opponents of the ACA. Avik Roy’s recent article on this topic highlights the fact that 35 percent of people eligible for expanded Medicaid are ex-convicts… as if that’s a valid reason for denying them healthcare. But one of the primary goals of the ACA was to lower the percentage of Americans who are uninsured.

States with the most successful exchanges have fully embraced the idea that having insurance – whether it’s a private plan or Medicaid – is better than no insurance. And they know that when a significant chunk of the population remains uninsured, the cost of uncompensated care hurts everyone – hospitals, the insured and uninsured populations, and state and local governments.

Medicaid expansion is an efficient way to drastically reduce the number of uninsured Americans. In just four and half months, West Virginia has gone from 13.5 percent of their population without insurance, to just 4.2 percent. They accomplished that primarily through Medicaid expansion and an aggressive enrollment campaign.

Their success could certainly be replicated in other states, but first the state leaders need to accept the idea that an insured population is healthier and better for the state than an uninsured one. Hopefully that moment of clarity will come soon for states that have not yet expanded Medicaid.