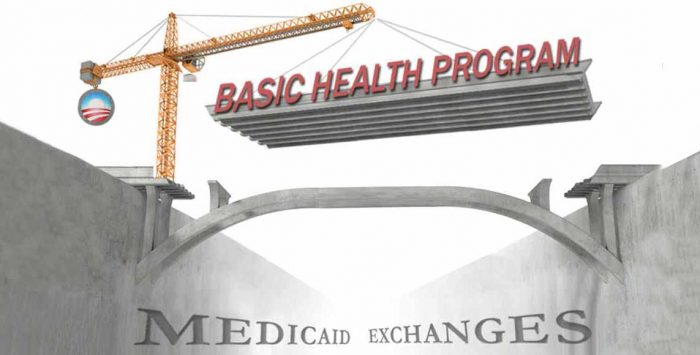 Under the ACA, most states have expanded Medicaid to people with income up to 138% of the poverty level. But people with incomes very close to the Medicaid eligibility cutoff frequently experience changes in income that result in switching from Medicaid to ACA’s qualified health plans (QHPs) and back. This “churning” creates fluctuating healthcare costs and premiums, and increased administrative work for the insureds, the QHP carriers and Medicaid programs.

The out-of-pocket differences between Medicaid and QHPs are significant, even for people with incomes just above the Medicaid eligibility threshold who qualify for cost-sharing subsidies.

The Basic Health Program (BHP) – section 1331 of the ACA — was envisioned as a solution, although most states did not establish a BHP. Under the ACA (aka Obamacare), states have the option to create a Basic Health Program for people with incomes a little above the upper limit for Medicaid eligibility, and for legal immigrants who aren’t eligible for Medicaid because of the five-year waiting period.

There has been some additional interest in BHPs recently: Kentucky has been working on the implementation of a BHP by the fall of 2023, although it’s unclear whether the state will complete that process. Oregon is also considering a BHP.

Why Minnesota and New York?

For several reasons, it made sense for Minnesota and New York to establish BHPs. With a BHP, the federal government pays the state 95% of what they would have paid in cost-sharing subsidies and premium subsidies if the BHP enrollees had instead enrolled in the second-lowest-cost Silver health insurance plan in the exchange. The state contributes additional funding as needed, and directs all the money to the managed care organizations that provide benefits under the BHP.

Coverage under the BHP is available to people who aren’t eligible for Medicaid, don’t have access to an affordable employer-sponsored plan, and whose household income doesn’t exceed 200% of the poverty level (a little more than $46,000 for a family of three in 2022). And it’s also available to legal immigrants with income up to 138% of the poverty level who aren’t eligible for Medicaid because of the five-year waiting period.

Under the ACA, legal immigrants who are ineligible for Medicaid (because of the five-year waiting period) are eligible for premium subsidies in the exchange with income as low as $0. But starting in 2001, New York allowed low-income legal immigrants to enroll in state-funded (no federal matching funds) Medicaid. Since a BHP receives significant federal funding, switching to a BHP allowed New York to save money on the state-funded Medicaid they provide for low-income immigrants.

New York’s BHP (aka The Essential Plan) also presents a better deal for enrollees. NY Department of Financial Services noted that a person earning about $20,000/year would spend less than half as much in total healthcare costs on the BHP in 2016 (the first year the state’s BHP was available) than they would have on a subsidized private health plan in 2015.

In Minnesota, the state has operated MinnesotaCare since 1992. The state-funded program offered health coverage to residents who weren’t eligible for Medicaid, and the eligibility threshold extended as high as 275% of the poverty level for families with children, and 175% of the poverty level for adults without children. By converting MinnesotaCare to a BHP as of January 2015 (it’s still called MinnesotaCare), the state was able to take advantage of the much more generous federal funding that goes with a BHP.

Enrollees in MinnesotaCare also have far lower out-of-pocket exposure and premiums than they’d pay if they were enrolled in a private, subsidized plan through the exchange. MinnesotaCare’s copay for an inpatient hospitalization is $250 in 2022, and copays for prescriptions are $7 or $25, depending on the drug, up to a maximum of $70 per month. MinnesotaCare had more than 107,000 enrollees as of mid-2022.

So by implementing BHPs, New York and Minnesota are able to utilize federal funding to provide coverage that they were previously offering under state-funded programs. And their residents are able to obtain coverage with lower premiums and lower cost-sharing than they’d get if they had to enroll in private health plans instead.

Massachusetts has a program called ConnectorCare that supplements exchange subsidies for enrollees with incomes up to 300% of the poverty level. It’s not a BHP though — ConnectorCare was created as part of an 1115 Medicaid waiver and uses Medicaid funds to supplement the subsidies.

Millions could benefit, but most states keep the status quo

Prior to 2014, a Kaiser Family Foundation analysis projected that nationwide, approximately 34% of total projected exchange enrollment would be people with incomes between 138% and 200% of the poverty level.

A 2012 Health Affairs study found that if all states were to implement BHPs, 1.8 million fewer adults would churn between Medicaid and QHPs each year. To address the problem of churn, New York’s BHP eligibility is determined annually. That means BHP enrollees aren’t subject to churning between Medicaid, the BHP, and private health plans based on income fluctuations during the year. (As noted above, Medicaid churn has not been an issue since the COVID pandemic began, although routine Medicaid eligibility determinations will resume once the public health emergency ends.)

At least eight states were considering implementing a BHP in 2015, although Minnesota was the only state that moved ahead with its plans. New York joined Minnesota in offering a BHP starting in 2016. As of 2022, they are still the only states that have BHPs. Kentucky may implement a BHP (uncertain as of late 2022), and Oregon is also considering one.

The ACA requires states that operate a BHP to coordinate BHP eligibility and enrollment with Medicaid, CHIP (Children’s Health Insurance Plan), and QHPs in the exchange, but states are given plenty of leeway in designing their BHPs within the basic guidelines established by HHS. States can create BHPs that contract with Medicaid managed care organizations and jointly administer BHPs with Medicaid, effectively creating seamless coverage for everyone under 200% of the poverty level, with continuity of benefits and providers. States also have the option of combining BHP risk pools with exchange risk pools in order to avoid destabilization of the private market that might occur if too many people were shifted to a separate BHP risk pool.

Both New York and Minnesota have made their BHPs available through their state-run exchanges, and both have opted to have BHP enrollment run year-round, like Medicaid, rather than having defined open enrollment periods like QHPs.

A BHP must limit premiums and cost-sharing to no more than the amounts that insureds would otherwise have paid in the exchanges with the regular premium and cost-sharing subsidies. But in reality, they’re likely to be far lower since BHPs are generally modeled on Medicaid and CHIP.

This is certainly the case in New York and Minnesota, where BHP enrollees face far less in out-of-pocket spending and premiums than they would if they had to purchase even heavily-subsidized QHP coverage in the exchange. Lower premiums and out-of-pocket costs in BHPs can lead to higher enrollment and coverage retention among the population with incomes under 200% of poverty level (versus enrollment and retention if this population had to enroll in subsidized QHPs instead).