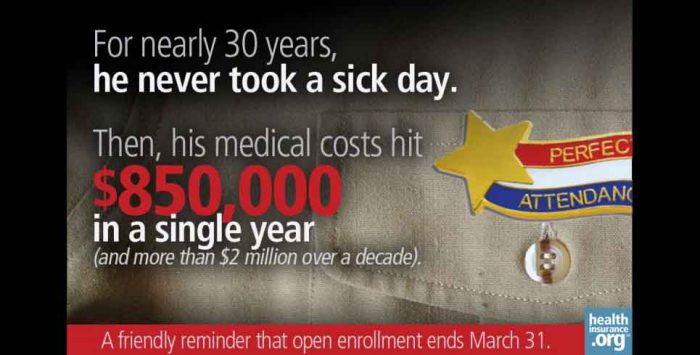 In 2001, my father was 54 years old, and had been healthy all his life. He hadn’t called in sick to work since 1974, and my parents’ medicine cabinet didn’t even contain Tylenol. In many ways, he was like the people who say “I don’t need health insurance – I’m healthy and never go to the doctor!” Except he did have insurance.

And it’s a good thing he did. That summer, he started to feel sick. At first, doctors couldn’t figure out what was wrong. Eventually, an emergency department visit resulted in a hospital admission and emergency dialysis, as his kidneys were failing. The diagnosis was Wegener’s Granulomatosis, an autoimmune disease that causes vascular inflammation and organ damage.

My father spent the next six years battling Wegener’s. He saw numerous specialists and subjected himself to a range of hard-hitting drugs, including extended chemotherapy, in an effort to get the disease into remission. In 2007, they finally found a drug that worked, and he’s been in remission for the last seven years. But for 11 years – until he received a donor kidney in 2012 – he needed dialysis in order to live. His average annual billed medical costs during those years were usually around $200,000, but there were a few years with significant hospital stays where the total billed costs were much higher – as much as $850,000 in one year.

Of course, a major benefit of health insurance is the network negotiated discounts. My parents and my father’s insurance (private and then eventually Medicare) weren’t on the hook for anywhere near the billed amounts. And thanks to insurance, the out-of-pocket medical costs were always manageable for my parents over the years. Insurance picked up the lion’s share of the costs, and my parents were able to focus on the task at hand – keeping my father as healthy as possible – rather than worrying about how they were going to pay for his care. 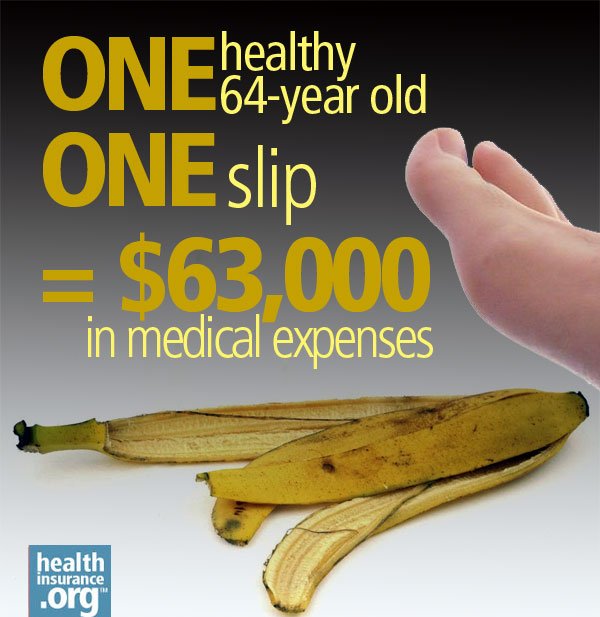 My mother has a story as well. She has never needed any medical care at all, except for the time a few years ago when she fell off the roof while doing some repairs. She was moving backwards, misjudged the edge, and ended up on the ground with her femur smashed against a concrete edging strip. The resulting hospital stay, surgery, follow up care, and various pieces of metal used to put her back together cost about $63,000.

This was a 64-year-old who was the picture of health – so healthy that she was climbing around on the roof like a mountain goat. Again, the sort of person who might feel like health insurance “isn’t worth it” because she had gone her whole life needing nothing more than preventive health care.

Thankfully, she did have health insurance, because paying $63,000 for a split-second mishap would have been a major bummer. Her policy had a $5,000 deductible and then covered 100 percent of the remaining costs. And although it’s never fun to have to fork over $5,000, it was certainly less painful than having to pay $63,000.

‘What’s the point of having insurance?’

My husband and I own a health insurance brokerage, and if we had a nickel for every time a client has said “What’s the point of having health insurance if I have a $3,000 (or $4,000 or $5,000) deductible?!” … we’d have a lot of nickels. If you’re considering a new health insurance policy and are put off by the deductible or out-of-pocket costs, ask yourself whether you’d rather pay a few thousand dollars to repair a broken femur, or $63,000.

And if you’re thinking “Well, that would never happen to me, because I hire people to fix my roof!” consider all of the other ways that you could wake up perfectly healthy tomorrow and then find yourself in the hospital by nightfall. Accidents don’t come with warnings. And in many cases, neither do serious illnesses. People like my father, who are perfectly healthy, can suddenly be stricken with chronic conditions that would be impossible to finance without insurance for all but the wealthiest among us.

If you’ve never had to use your health insurance, you’ve been lucky. And you might want to take a very careful look at the coverage your plan provides if it’s a pre-2014 plan. Some of those policies are good, but some are bad and some are terrible. You don’t want to find out after you’re in the hospital that your policy is full of holes – now’s a good time to replace a not-great plan with a new, ACA-compliant plan that covers the essential health benefits and offers a full range of consumer protections.

If you’re uninsured and don’t see the value in having insurance because you’ve never needed any significant medical care, you’re lucky. Sure, you take very good care of yourself, and that’s a great way to minimize your odds of needing care. But luck has absolutely played a role as well. And although luck may last a long time, it’s not something you want to rely on as Plan A.

You need health insurance – we’ve established that much. And you need to enroll now, because time is rapidly running out. You only have until the end of March to purchase a new health insurance policy. After that, your options will be extremely limited until 2015 open enrollment begins in November.

Exchange web sites are working well, call centers have significantly increased their staffing over the last few months, and navigators and brokers have worked out the learning curve kinks on the millions of enrollees who have already gone through the application process. In short, the growing pains from October and November have been sorted out, and it’s pretty easy to enroll now.

If your income is less than 400 percent of poverty level (the current open enrollment uses the 2013 numbers), or if you think that there’s any chance it might drop below that threshold later in the year, make sure that you enroll through the exchange, as that’s the only place where premium subsidies and cost-sharing subsidies are available. If not, you’re free to enroll through the exchange or off-exchange. But don’t delay – open enrollment for both ends on March 31.

If you’re undeterred by risk or the possibility of subsidies and are planning to remain uninsured and pay the individual mandate penalty instead, make sure you know how much you’ll owe. There’s a common misconception that the penalty is “only $95” this year, but that’s the bare minimum for a single individual. The flat-rate penalty is calculated on a per-person basis, but depending on your income, you may have to pay one percent of your taxable household income instead.