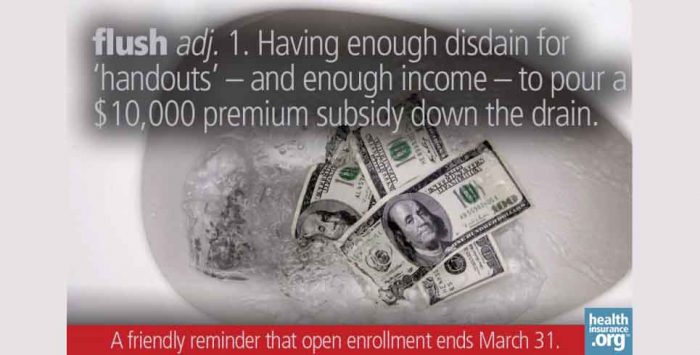 My husband and I own a health insurance brokerage, and in the early days of open enrollment, we worked with a couple from a small town in eastern Colorado. They were both in their early 60s, and their income was right around $60,000, making them eligible for a subsidy of roughly $830 a month.

Except to them, it wasn’t. Their position was that subsidies amounted to a government handout, and they weren’t interested in financial assistance to purchase health insurance, despite the fact that the least expensive Bronze plan in their area was over $1,000 a month (and could be purchased for less than $180 a month with their subsidy).

‘Just saying No’ is expensive

They said that they had never taken a government handout in the past, and they didn’t intend to start now. Their plan was to pay full price for their new policy, even though it would cost 20 percent of their income to do so.

This is certainly not a common sentiment. The vast majority of our clients are thrilled to find out they qualify for subsidies. But to some people, the premium tax credits feel like something they haven’t “earned” and thus shouldn’t be entitled to use. It’s understandable that people who consider themselves particularly independent might shy away from subsidies on principle.

But we live in an interconnected society. Tax dollars are used to support programs and infrastructure that provide for the public good, including schools, roads, police and fire protection, Medicare, Social Security, and many others. The ACA’s premium tax credits are providing for the public good, because the overall healthcare system, and society in general, function much better when everyone is insured.

Premium tax credits are available to a very broad segment of the population, as two thirds of the country has household incomes under 400 percent of poverty level (the upper limit for subsidy eligibility). And there are no asset tests for ACA subsidies: It doesn’t matter how much money you have in the bank or in the stock market or whether you have three homes. All that matters is your modified adjusted gross income.

A family of four with an income of $94,000 is eligible for premium tax credits. Virtually everyone would agree on the fact that a family of four earning $94,000 is certainly not low-income. But the extremely high cost of health care in the United States means that unsubsidized health insurance would be unaffordable to even solidly middle-class families. The lawmakers who wrote the ACA knew that, and thus the subsidies are an integral part of healthcare reform.

Premium tax credits are a cornerstone of the ACA. Overhauling the individual health insurance market was one of the primary goals of the legislation. Individual policies used to be medically underwritten and ran the gamut from great to terrible in terms of coverage provided. The new policies are much more standardized and all offer very reliable coverage.

And even more importantly, they’re all guaranteed issue during open enrollment, which means that insurers can’t reject people or charge them more based on medical history. These changes essentially make individual policies much more similar to group plans offered by employers.

In the past, employer group premiums were significantly more expensive than individual premiums, mainly because the group coverage was guaranteed issue and was usually more robust. But people with employer-sponsored coverage often aren’t aware of how expensive their group plan actually is, because employers subsidize a portion of the costs.

Now that the price of coverage in the individual market is closer to that of the group market, it’s necessary to subsidize a portion of the cost for many households in order to make the coverage affordable – just as employers do in the group market.

The premium tax credits are how lawmakers achieved the goal of making health insurance affordable. If you had access to a group plan and your employer was going to pay a portion of the premium, would you reject that offer and ask to pay the whole bill yourself? Employers get to deduct the health insurance premiums they pay for their workers, and the employees don’t have to pay taxes on health insurance benefits.

But for many people who purchase their own individual policies, those tax breaks aren’t available. People who are self-employed can deduct their premiums, but those who work for an employer that doesn’t provide insurance cannot deduct individual health insurance premiums.

Others pay when you go uninsured

The ACA’s premium tax credits help to even out some of those discrepancies. And they make health insurance much more accessible for a large segment of the population that would likely find the new policies unaffordable if the subsidies weren’t part of the deal.

So if you’re eligible for a subsidy, take it. If not taking the subsidy means that you run the risk of being uninsured, remember that when the uninsured need emergency care, everyone else ultimately pays for it if the patient is not able to cover the bills. The more people who are insured, the less uncompensated care has to be provided by hospitals and absorbed into the system.

Nearly half of us already ‘subsidized’

And if not taking the subsidy means that you’re going to stretch your budgets to its limits by spending 20 percent of it on health insurance, remember that nearly half of the U.S. population has employer-sponsored health insurance (subsidized to varying degrees), and another 30 percent has Medicare or Medicaid (subsidized entirely or in large part).

Do not feel bad about accepting the subsidy for which you’re eligible! If you’re purchasing your own health insurance, you’re in the minority – and it’s a minority that has long been marginalized both in terms of policy availability and the tax code.

The ACA’s premium tax credits are not a handout. Together with the consumer protections built into the ACA, the premium subsidies are simply a way of ensuring that people who purchase their own health insurance no longer have to go it alone.