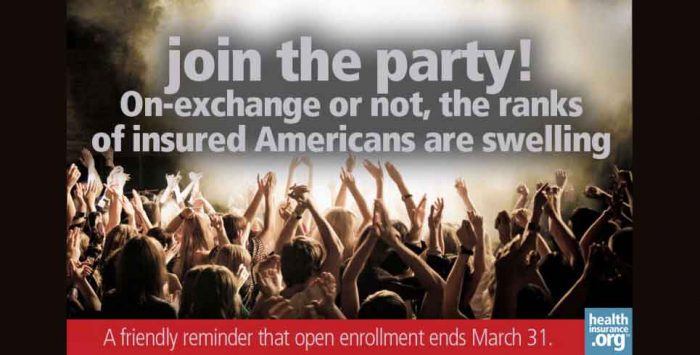 We’re now in the single digits in our countdown to the end of being able to buy health insurance on the Obamacare exchanges, but that doesn’t mean that those exchanges are the only way to sign up for coverage before March 31. In fact, millions of Americans have been enrolling “off exchange” since last fall and will continue to be able to do so until the end of the month.

While almost all of the media’s attention has been focused on whether the final tally of people enrolling in coverage through HealthCare.gov and the state exchanges will reach 6 million – the revised prediction from the feds – very little mention has been made of the fact that as many as 4 million more of us have been signing up the old-fashioned way.

Charles Gaba, a Michigan-based web developer who has attracted a lot of attention in recent weeks by gathering and interpreting enrollment data from multiple sources – and charting it all in a way that no one else has done – believes that by the end of this month, the total number of people who will have enrolled in coverage one way or another since October 1 (when the exchanges went live) may reach 15.5 million.

Now that the Obama administration is giving people who have started the process of enrolling in a plan until April 15 to complete their applications, that total could be even higher when all the tabulations are done.

It’s clear that for various reasons, many people have opted out of the exchanges and have been buying coverage either through an insurance agent or broker or directly from an insurance company, even though the only way to get federal assistance to help cover the cost of the premiums is through HealthCare.gov or a state-run exchange. (The Department of Health and Human Services said earlier this month that approximately 80 percent of people who had signed up for coverage through the federal and state exchanges qualified for subsidies.)

Federal subsidies – in the form of tax credits – are available to individuals with annual incomes up to $45,960 and families of four up to $94,200. (The income threshold is higher for larger families.) The ability to get a subsidy for 2014 will end at the end of this open enrollment period. It’s important to keep in mind, however, that you will still be able to enroll in an exchange plan and possibly qualify for a subsidy after March 31 if you have a major life event, such as getting married or divorced, the death of a spouse, losing a job or moving to another state.

But if you know you earn too much to qualify for a subsidy – or have other reasons, including your political inclinations, for not wanting to deal with an Obamacare-created exchange – you can still enroll in coverage “off-exchange” in the private health insurance market for a few more days. (Open enrollment off-exchange ends on March 31, though it’s up to each carrier whether or not it extends the enrollment deadline.) If you do, you’ll be joining many of your fellow Americans in getting insured that way.

Even reliable Obamacare critic and Forbes columnist Scott Gottlieb wrote last week that there would be an “upside surprise” to Obamacare in the form of more people enrolling “off-exchange” than anticipated. Citing estimates by a Wall Street financial analyst, Gottlieb predicted off-exchange enrollment could be as high as 20 percent of the total number of Americans who buy their coverage on the individual market this year.

Gottlieb noted that regional insurer Highmark announced recently that 31 percent of the 133,000 people who had signed up for its plans in Pennsylvania, Delaware and West Virginia had enrolled directly rather than through an exchange. And national insurer WellPoint has said that about 20 percent of its applications “came off exchanges.”

If Gottlieb is right, I have no problem with that. Not in the least. That’s because the overall goal is not to fulfill a prediction made by the Congressional Budget Office about the number of people who would get covered through an exchange. It’s about getting people covered. One way or another.

People have long had the option of going straight to an insurance company or insurance agent to buy coverage. The big difference this year is that because of the Affordable Care Act, those insurance companies can no longer deny anyone coverage – or charge anyone more-because of a preexisting condition.

This means that many people who have been shut out – or priced out – of the insurance market in the past because of their medical history can now get it. And coverage does not have to be purchased through HealthCare.gov.

Many people undoubtedly went straight to insurance companies directly – or to an agent or broker – when the public exchanges were plagued with glitches last fall. And, as noted earlier, many others who knew they made too much money to qualify for a subsidy also likely bypassed the public exchanges in favor of shopping more directly for coverage.

But no one knows exactly how many people have enrolled off-exchange to date because private insurers are not obligated to report that information in most states. Gaba told me that only two states – Washington and Wisconsin – have reported off-exchange enrollment.

So when you hear a final tally next month of the millions who have signed up for coverage through a public exchange, know that millions more other Americans are also newly insured – and it may be months before all them are accounted for.

In addition to people being able to enroll “off exchange,” many others will be newly insured because of the 25 states that are expanding Medicaid. Gaba estimates that about 4.5 million Americans have joined the ranks of the insured as a result of ACA’s authorized expansion of Medicaid programs in 25 states and the District of Columbia.

An estimated 1.7 million other folks have enrolled in Medicaid who were already eligible for the program but likely didn’t know they were eligible until after the reform law was enacted. Several thousand others will be getting coverage from employers who have started offering it because of tax credits now available to small businesses as a result of Obamacare.

And don’t forget that many young adults have been added to the rolls of the insured by being able to stay on their parents’ policies until they turn 26. Gaba estimates that between 2.5 million and 3.10 million young people have become insured since that provision of the Affordable Care Act became effective in 2010.

Taking all of this into account, Gaba is projecting that between 12 million and 15.5 million Americans will be newly covered this year, thanks to the ACA.

Even if the final number is on the low end of his range, that’s still great news. The whole point of reform was to make sure more of us are able to get access to affordable care. We’re making decent progress.