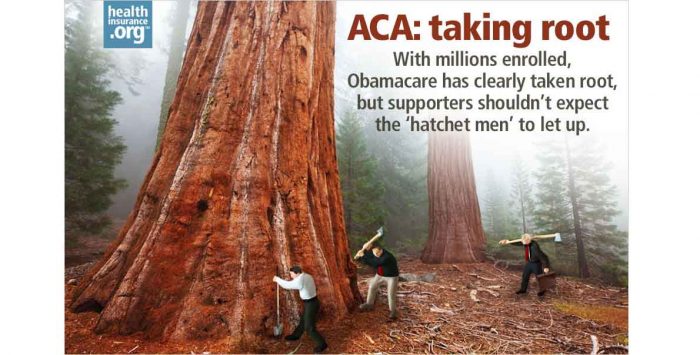 The Obama administration and supporters of the Affordable Care Act were able to breathe a sigh of relief when the health plan numbers came in this week. The original goal of getting 7 million Americans signed up for coverage on the newly created exchanges not only was met but exceeded.

I’m willing to go out on a limb and predict that the number of people moving into the ranks of the insured will continue to go up in the weeks ahead. Expect a sizable jump in the total on April 15. Not only is that tax day, it’s also the day when everyone who didn’t finish their applications by the end of last month will have to make up their minds and pick a plan.

No rest for weary supporters

So can supporters of this expansion of coverage – the biggest since the first Americans began enrolling in Medicare in 1966 – check off health care reform and move on to fight other battles? Not a chance. They are going to have to stay in the game and stay vigilant, not just to protect the ACA from attacks but to push for changes not only to bring even more people into coverage but also to get a better handle on health care costs.

President Obama’s political opponents can be counted on to continue criticizing the law and running against “Obamacare” between now and the mid-term elections on November 4. If the ads we’ve seen so far are an indication of what to expect in the coming months, don’t expect facts to get in the way of a good campaign commercial. They never have and probably never will. Supporters of the ACA will have their hands full just trying to debunk the lies and half-truths. So will journalists.

But don’t expect politicians campaigning against the law to be able to carry out their campaign promises of repealing or replacing it or even to address any of its shortcomings. I for one don’t think we’ll see anything happening to the law in Washington after the next Congress is sworn in in January, even if Republicans win enough seats take control of the Senate and can hold on to their majority in the House.

That’s because as long as Barack Obama is in the White House, he’ll be able to veto any legislation a Republican-controlled Congress might send his way. And if Democrats can hang on to a majority in the Senate, they’ll continue to be reluctant to sponsor bills to “fix” the ACA for fear that Republicans will load them up with amendments to gut the law. And by the time of the 2016 presidential election, the ACA will be so entrenched that efforts to repeal it then or later will be even more unlikely to succeed.

Don’t expect President Obama’s successor in the White House, even if he or she is a Republican, to sign a bill that would take away coverage of millions of Americans, many of whom had not been able to buy it at any price before the ACA was enacted because of preexisting conditions.

What supporters of the law need to keep in mind, however, is that the health insurance industry and other special interests will be spending millions of dollars to influence the coming elections, not with the hope or expectation that the ACA will be repealed but that with more friends in high places, they’ll be able to get some of the profit-impeding consumer protections weakened.

Insurers, for example, would like to have more friends in Congress to pressure the Department of Health and Human Services into relaxing the requirement that they must spend at least 80 percent of our premium dollars on our medical care. And they’d really love it if their friends could halt the reduction in overpayments the government has been making to insurers for years to stay in the Medicare Advantage business.

Insurers and medical device manufacturers are also trying to get more support for their efforts to get rid of the fees that the ACA imposed on them to help finance the expansion of coverage.

And those two powerful industries are having success in getting Democrats as well as Republicans to see things from their point of view. Even liberal Democrats Elizabeth Warren of Massachusetts and Al Franken of Minnesota have said they support abolishing the medical device tax. It probably will come as no surprise to you that several medical device manufacturers are based in those states. And health insurers frequently remind the media that some Democrats have joined Republicans in calling for repeal of the health plan tax.

Another way health insurers will try to influence the mid-term elections will be to predict that they will have to jack up premiums for 2015 coverage by double digits because of Obamacare. I’m already seeing some insurance company executives suggesting that such increases will be necessary, even though they couldn’t have enough information yet about how much they’ll have to pay out in claims this year to justify those predictions.

Supporters need stay in the game

So why are they doing this? To scare us into voting against candidates who support the ACA. Even though insurers benefit from the law, if they can persuade voters to elect have more industry-friendly candidates, they’ll have a better chance of getting the consumer protections weakened and the health plan tax repealed.

Supporters of the law will also have to stay in the game at the state level – especially in the states that have not yet expanded their Medicaid programs. Far more Americans will be able to move into the ranks of the insured when Texas, Florida, Pennsylvania and 22 other states join the rest of the country in expanding Medicaid to cover more of their residents.

I predict that coalitions of consumer and patient advocates, hospitals and business leaders will eventually succeed in persuading Red State governors and legislators to expand their Medicaid programs – but not until after the mid-term elections this fall.

So if you support the Affordable Care Act, know that your work is not yet done. And if you don’t like it, you’ll have opportunities to vote for candidates who say they’d like to get rid of it. Just be careful not to be persuaded to vote against your own best interests.