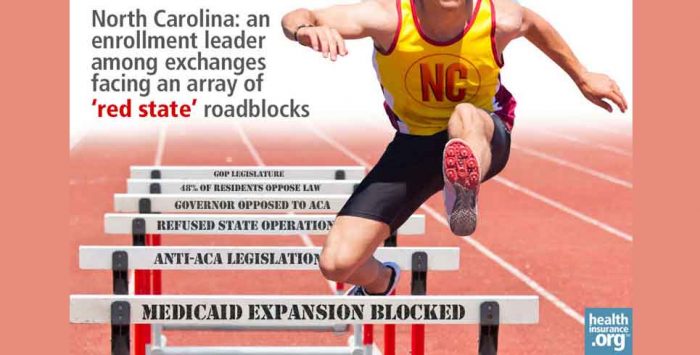 Almost as soon as the exchange websites opened for business on October 1, states began to be pigeonholed into categories: success, failure, cooperative, obstructive, along with some hybrids to round things out. Many of the Affordable Care Act success stories come from solid blue states like California, Washington, and New York: Democrats in the Governor’s office and holding a majority in the legislature, and a public that is generally supportive of the ACA – for these states, setting up their own exchanges, expanding Medicaid, and actively promoting the exchange was almost a given. It’s not surprising that they’re succeeding; they were pegged as likely success stories long before open enrollment began.

But there are other states that have emerged as ACA success stories, somewhat unexpectedly. No doubt their success is not a surprise to their navigators, Medicaid enrollment coordinators, outreach teams, and in some cases, elected officials. But states like North Carolina, Kentucky, and West Virginia have been steadily getting the job done over the last few months, and their outcomes speak for themselves.

If North Carolina were pulling up the enrollment rear, it probably wouldn’t surprise anyone. The state has a Republican Governor and legislature, opted to let HHS run its exchange, refused to expand Medicaid, and passed a law in early 2013 blocking state agencies from participating in ACA implementation. And only 38 percent of the population supports the ACA (48 percent are opposed to the law).

Yet among the states where HHS is running the exchange, only Texas and Florida have higher private plan enrollment totals – and their populations are significantly larger.

Blueprint for other state exchanges?

I spoke with Lee Dixon, the Managing Director of the North Carolina Navigator Consortium, about how the state has achieved such success despite the roadblocks they faced. He described a blueprint that could work in other states as well, as long as there are enough motivated individuals and organizations collaborating on the effort.

Dixon’s Navigator Consortium is comprised of 11 entities, including community care organizations, public health agencies, and legal aid offices. The Consortium received the fourth-largest navigator grant in the country, and has 96 paid navigators and another 151 volunteer navigators. In addition to the Navigator Consortium, there are three other navigator organizations in the state, along with 31 federally qualified health centers that are working to educate and enroll local residents. All of these organizations are working together, which is a key element of the state’s success.

In February 2013, 40 stakeholders – including advocacy groups, providers, hospitals, faith-based organizations, safety net clinics, brokers and insurance carriers – came together for the first of what they dubbed the “Big Tent” meetings, to discuss ACA implementation in North Carolina. They’ve continued to meet biweekly, and attendance has ballooned to almost 300 people, including representatives from nearly 100 organizations as well as private citizens who are passionate about healthcare reform.

Some meetings are for general information sharing, while others are focused on a specific topic (eg., enrollment efforts at community colleges, or enrollment in rural areas of the state). The Big Tent meetings are now being funded by the Kate B. Reynolds Charitable Trust, further ensuring their continued success.

The Navigator Consortium established a toll-free number (855-733-3711) that anyone in NC can call to be connected with an in-person assister. Schedules for all four of the navigator organizations and the 31 health centers are available to the phone operators, so they’re able to quickly match residents with the nearest local navigator. When navigators meet with residents, they focus on building trust and making connections – and in many cases, the navigators already have widespread community ties through churches and other local organizations.

North Carolina is one of ten states where Enroll America has focused their efforts, and Dixon noted that the group’s efforts have played a key role in the state’s success.

Dixon described the ACA as “an opportunity that cannot and should not be missed” and the community-based enrollment efforts in North Carolina prove that a dedicated group of individuals and organizations working together can succeed even without the support of lawmakers and government-run organizations.

Kentucky has been widely praised for its ACA success, although there are critics who point out that when it comes to QHP enrollment, Kentucky is falling short of the goal that HHS set for the state, and isn’t really outperforming its neighboring states. But the state-level goals set by CMS/HHS before the exchanges opened were little more than guesses. It makes more sense to look at how many people the exchanges have enrolled as a percentage of the total uninsured population prior to open enrollment.

In the case of Kentucky, the state had about 640,000 uninsured residents last year. By the end of February, Kynect (the state-run exchange) had enrolled 54,369 people in private plans through the exchange. But they had also enrolled 210,545 people in Medicaid. Their total enrollment was nearly 265,000, with another month left in open enrollment.

Jill Midkiff is the Director of Communications for Kentucky’s Department of Health and Family Services about Kynect’s enrollment success. She mentioned that prior to open enrollment, nearly half of Kentucky’s uninsured population was estimated to be eligible for Medicaid under the new expanded guidelines (about 308,000 people). Although the state does not yet have data on how many of the new Medicaid enrollees were previously uninsured, Midkiff said they believe that a large number of them were previously uninsured.

Kentucky’s Governor, Democrat Steve Beshear, has been outspoken in his support for the ACA, but the state legislature is politically divided. And Kentucky is represented in the Senate by Mitch McConnell and Paul Rand, both of whom are vehemently opposed to the ACA.

And although President Obama has only a 34 percent approval rating in Kentucky, exchange enrollment has been brisk – in part because of the massive advertising campaign and outreach that Kynect has conducted, and also because Governor Beshear has made a point to separate residents’ feelings about the President from their feelings about Kynect.

Although Kentucky’s QHP enrollment puts it in the middle of the pack, its Medicaid enrollment stands out: Only two states – Washington and California, both with much larger populations – had higher Medicaid enrollment totals at the beginning of February. Medicaid enrollment is a cornerstone of the ACA. One of the main goals of the legislation was to insure as many of the uninsured as possible, and Medicaid expansion is an efficient way to go about doing that.

In Kentucky, not only did the state set up its own health insurance exchange and expand Medicaid, but they’ve also got a dedicated team of navigators, known as kynectors, who have worked tirelessly for months to have as many in-person conversations as possible with residents around the state. In Eastern Kentucky, there are ten counties where more than 50 percent of the new enrollees in the first four months of open enrollment were previously uninsured – this success in reaching out to the uninsured population is largely attributed to the boots-on-the-ground efforts of local kynectors.

And as we head into the latter part of open enrollment, new enrollees across the country are expected to increasingly be people who were previously uninsured; Kynect’s success is likely to grow.

West Virginia opted for a partnership exchange, working together with HHS and relying on HealthCare.gov for enrollment. But the state also expanded Medicaid, and has been aggressive about enrollment. Using auto-enrollment and extensive outreach, they had enrolled roughly 70 percent of the state’s estimated Medicaid-eligible population (about 87,000 people, which is already 24,000 more than had been expected to enroll by the end of 2014) by mid-February.

One of West Virginia’s most successful strategies has been identifying people who were already enrolled in other government programs like Children’s Health Insurance Program (CHIP), Supplemental Nutrition Assistance Program (SNAP) and Women, Infants and Children (WIC), and auto-enrolling eligible individuals based on income information already available through those programs. Between Medicaid and the QHP enrollments in the exchange, West Virginia has reduced its uninsured rate from 13.5 percent of the population to just 4.2 percent – after only four and a half months of open enrollment.

West Virginia, Kentucky, and North Carolina are all examples of how the ACA can – and will – result in fewer uninsured Americans, even without the full support of political leaders. And although public support is low in some states – generally in areas where President Obama is unpopular – navigators and outreach groups are finding that people are eager to enroll once they understand the details of the coverage that’s available and how subsidies help to make it affordable.