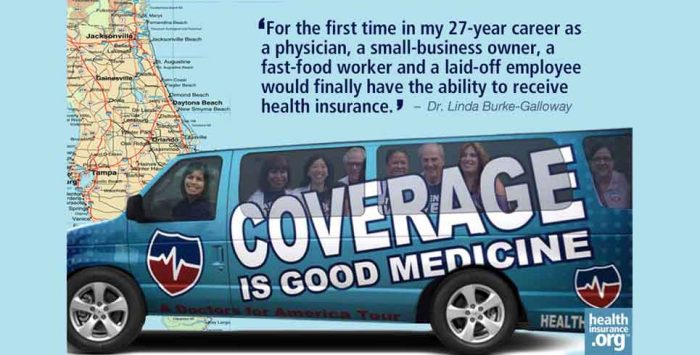 The most profound changes in our social and political history often occurred through the use of a bus. From Rosa Parks’s refusal to move to the back of a bus to the brave Freedom Riders who helped win the right to vote in the early 1960’s, a bus has not only been a means of transportation but also a symbol of determination.

With my two middle-school aged sons in tow, I braved the elements, driving through a horrendous thunder storm to join approximately 13 members of Doctors for America and its community partners as we kicked off the Coverage is Good Medicine bus tour in an attempt to enroll as many Floridians as possible for health insurance before the deadline of March 31, 2014.

As DFA’s Chairperson, Dr. Mona Mangat, has pointed out, “For millions of Americans who have already signed up, quality, affordable healthcare is now a reality … and it can be a reality for millions more who are eligible for coverage but don’t know it yet or about the financial help available. That’s why doctors will be traveling the state and answering Floridians’ questions to help them get covered before the March 31st deadline.”

The blue tour bus arrived safely from Tampa, not driven by a hired bus driver, but by Dr. Mangat, a petite Allergy and Asthma specialist from St. Petersburg. We convened at the Dr. James R. Smith Community Center located in the predominantly African American community of Washington Shores in Orlando, Florida where we were greeted by City Commissioner Sam Ing and State Representative Bruce Antone. Commissioner Ing spoke to a captive audience about the importance of the Affordable Care Act and how it is saving millions of lives. Stephanie Owens, a senior advisor from HHS Secretary Sebelius’ office, was also present and informed us that she had been in Florida for over a month enrolling new participants and will remain here until April.

As the federal navigators began the enrollment process, I paused for a moment to reflect on the historical significance of the moment. For the first time in my 27-year career as a physician, a small-business owner, a fast-food worker and a laid-off employee would finally have the ability to receive health insurance.

One of the most satisfying observations was the number of uninsured men of color who were trying to enroll. This is a population who traditionally, ends up in the emergency room with end-stage illnesses. Their decision to be more proactive about their health was commendable.

Although we had some success stories, we also had some defeats. There was a middle-aged construction worker who earned too much money to receive Medicaid but not enough money to quality for insurance under the Affordable Care Act.

There was also a dancer who had injured her leg and might require surgery. She also earned too much money for Medicaid but not enough for insurance under the ACA. If Florida had accepted the $51 billion dollars to expand Medicaid, both people could have been insured.

While Florida has enrolled almost 300,000 people in two months, they would be able to enroll a lot more with the approval of Medicaid expansion. (Find out if your state is working to expand coverage – and how you can help.) The dancer and the construction worker have just as much right to receive health insurance as a State or U.S. Senator. Coverage equals good medicine. I sincerely hope the politicians are listening.