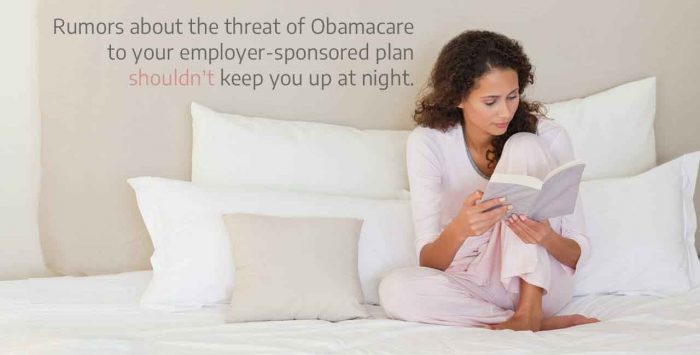 If you are among the 60 percent of Americans who have health insurance coverage through your workplace, you may be worried about how the Affordable Care Act (aka Obamacare) is affecting your coverage.

There are so many rumors circulating about the impact of the new law on private companies that it is not surprising you may be concerned. First, there was a threat that employers would drop their full-time employees to part-time to avoid penalties in the law. Then we heard that they might drop your coverage altogether or raise your premiums because of the law. A few weeks ago, the Obama Administration delayed the implementation of the law for some employers even longer.

Should any of this keep you awake at night?

To address some of these concerns, I asked Larry Levitt, the Senior Vice President for Special Initiatives at the Kaiser Family Foundation, to respond to some questions about employer-sponsored coverage. Larry has been working in health policy for over 25 years and was a Senior Health Policy Advisor in the Clinton Administration.

Linda Bergthold: Despite all the dire warnings about medium- or large-size employers dropping their health insurance benefits or making significant changes, does it look like the Affordable Care Act is having that impact? Other than pure political pressure, why did the Administration delay the mandate for employers between 51 and 100 employees to provide insurance?

Larry Levitt: I always believed that the fear of larger employers dropping health benefits now or in the near future was highly exaggerated. The vast majority (93 percent) of firms with 50 or more employees already offer health coverage to their workers. They do so voluntarily to attract a quality workforce. That’s not likely to change anytime soon.

Over time, a small number of firms may drop health benefits. This is consistent with what the Congressional Budget Office has projected, showing a modest decline in employer coverage over time. Those that do drop benefits are likely to be smaller businesses not subject to the requirement to offer coverage or pay a penalty, and lower-wage firms where the tax exemption for employer-provided health benefits is lower and the availability of premium tax credits in exchanges under the Affordable Care Act (ACA) provide greater subsidies for their workers.

Ultimately, employers will likely make economic judgments about whether to offer benefits or not, balancing a variety of factors such as:

One consequence of the problematic rollout of the exchanges is that employers are likely to be even more cautious about making changes in their offering of health benefits until they see how the new marketplace works over time.

For a variety of reasons, regulations for the employer requirement were issued very late, and there were some complicated details to work out around employer reporting. That led to a delay in the coverage requirement for one year, and a subsequent phase-in of the requirement for another year. This provides for a gradual transition in much the same way that the law phased-in the individual mandate.

Are they changing hourly requirements?

Linda Bergthold: There has also been a lot of hype about employers reducing employees to part-time status to avoid requirements of the ACA. Are you aware of any data that shows employers changing hourly requirements? If you are an employee working 35 hours a week, what can you expect?

Larry Levitt: The aggregate data show no systematic shift to part-time work, and the recent CBO report on the labor effects of the ACA said there is no compelling evidence that such a shift is occurring.

That should not be surprising. The employer requirement was delayed, so there has been no economic incentive to reduce worker hours. And, reducing hours is not always so easy. The work still needs to get done, so it could mean more disruption and greater costs associated with hiring and training.

That said, there have been anecdotal reports of some employers reducing work hours of some part-time workers in anticipation of the requirement to offer coverage to those working an average of 30 or more hours per week. That will no doubt continue to occur, though it’s unlikely to add up to many people in aggregate terms.

It’s also important to put all this in context. Employers that offer coverage have always had hour thresholds that determine eligibility for health benefits. All the ACA did was make those thresholds uniform. Any time you require such uniformity, there will be some amount of movement and change on the margin.

Shifting from a 30-hour threshold to 40 hours would largely undermine the employer requirement to offer coverage. It would be a relatively simple matter for employers to reduce work hours for employees not offered coverage to just below that 40-hour threshold with minimal disruption to their businesses. It’s certainly a reasonable debate as to whether employers should be required to offer coverage or pay a penalty, but such a significant change would have economic consequences, significantly reducing revenue to the federal government and raising costs.

Are mandated benefits driving up costs?

Linda Bergthold: Most employer-sponsored health benefit packages are quite comprehensive and already include almost all of the essential benefits required by the ACA. The exception might be rehabilitation and MH/SA (Mental Health/Substance Abuse) benefits that are not always included in every benefit plan. Is there any evidence that requiring essential benefits has driven up employer benefit costs?

Larry Levitt: With a few minor exceptions, such has habilitation and mental health parity in some cases, the essential benefits in the ACA are very similar to what employers already provide. In fact, states had a variety of options for setting benchmarks for the essential benefits, and in the vast majority of cases chose one of the largest existing small-business plans in the state, so the package is based in large part on what most employers were already providing.

There is some confusion, though, about what benefit rules apply to employers. Medium and large employers do not have to offer the essential benefits (although many already do, per above). Small-business insurance does have to include the essential benefits, but again, the effect is likely to be modest. And, small businesses that self-insure, which may be a growing trend — are not subject to the benefit requirements.

Linda Bergthold: Large-employee benefit firms like Mercer, Aon Hewitt and Towers Watson are all offering “private exchanges” to their large-employer clients. These exchanges give employees or retirees more choice of carriers and plans and ultimately propose to lower costs. How do you view the “private” exchange trend? Do you see a two-track exchange landscape – one for individuals and low -income citizens and the other for middle and upper class people with job-based benefits? What would the impact on the public exchanges be in that case?

Larry Levitt: These new private exchange share a name with the ACA but are really quite different. For example, there are no premium subsidies for low- and middle-income enrollees in private exchanges.

These efforts are more part of a long-running discussion about the potential for employers to move towards a defined contribution approach for health insurance, much the way they did for pensions through the shift to 401(k) plans. This may – with an emphasis on “may” – finally be happening for a variety of reasons. Maybe it’s the semantic similarity to the ACA exchanges. Maybe it’s a response to the long-term trend of health insurance costs rising faster than inflation and wages (even though we are at this moment in a period of historically low increases in premiums). Or, maybe it’s in anticipation of the so-called Cadillac plan tax, which will impose a 40 percent tax on high-cost plans beginning in 2018 and will provide a strong incentive to reduce the cost and growth of employer-sponsored health benefits.

Private exchanges, like ACA exchanges, provide individual employees with a choice of health plans, though they also facilitate employers turning their contributions towards coverage into what is in effect a voucher, shifting the risk of rising costs to employees.

I don’t think private exchanges represent a two-track landscape any more than the reality that most people of working age will still get their insurance through employers, while some will be covered through Medicaid or ACA exchanges. And, the ACA will significantly equalize coverage across the population, so what kind of insurance people have access to will vary much less than it did historically.

The future of employer-based benefits

Linda Bergthold: What do you see as the future of our employer-based benefit approach? Will the economics of health reform ultimately force employers to drop this benefit and send employees to the public exchanges, which may turn out to provide less costly coverage?

Larry Levitt: There’s nothing inherently advantageous to our employer-based health insurance system, which is mostly an accident of history. Proposals from the right and the left have both advocated moving away from it.

However, employer-based coverage does do a remarkable job of pooling risk and facilitating people to sign up for coverage. And, any significant dropping of coverage by employers – which I don’t think is likely – would increase government expenditures for premium subsidies.

While the ACA does not require a shift away from employer-sponsored insurance, it does provide some of the same benefits as breaking the tie between employment and health insurance coverage. People who lose their jobs will no longer lose their insurance in most cases, with expanded Medicaid coverage, guaranteed access to private insurance, and premium subsidies in exchanges.

This will largely eliminate the problem of “job lock” where people stay in a job simply because they fear losing their insurance. (Note that some people are still left out, in particular many poor adults in states that choose not to expand Medicaid.)

So, while there is some uncertainty around the future of employer-based health insurance under the ACA, there is now a safety net that didn’t exist before, if the availability of employer coverage declines.