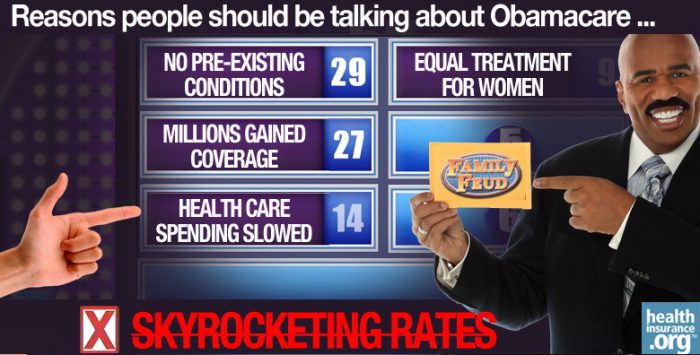 Last spring, when it was obvious that Obamacare was meeting its enrollment targets for the first year, opponents of the law needed some new ammunition for their doom and gloom predictions. And so they turned to rate increases.

In March, The Hill published an articled entitled “Obamacare premiums to skyrocket” and it was quoted and reprinted by media all across the country. The gist of it, mostly from anonymous industry experts, was that 2015 premiums were going to be significantly higher than they were in 2014, and that in some regions, premiums would double.

Because so much of the sticker-shock talk was coming from sources that were clearly opposed to the ACA, it’s difficult to separate fact from deliberate fear mongering. But there was certainly some concern that not enough young, healthy people had enrolled in ACA-compliant plans, and that the average enrollee was older and sicker than originally projected.

Fortunately, there are other aspects of healthcare reform that are tackling the cost end of the equation, and it appears that they are working.

In just one example, there has been a sharp increase in the utilization of value-oriented payment systems, designed to maximize efficiency and quality while reducing waste and overutilization. Last year, 11 percent of payments went through a value-oriented system. This year, it’s 40 percent.

So although there is certainly some pent-up demand for healthcare among the previously uninsured population, there are also signs that we’re making progress in reining in the ballooning cost of healthcare. This is a key element in keeping health insurance premiums in check, since the driving factor behind premium increases is the rising cost of healthcare.

There are still a few states where we don’t know what the 2015 rates are going to be, but it certainly appears that the final numbers are coming in considerably under the 100 percent increase that was being projected by ACA opponents back in March. And not only are carriers agreeing to very modest rate hikes for 2015, there’s also a significant influx of new carriers joining the exchanges, increasing competition and further stabilizing rates.

In some states, rates have been approved by regulators without changes. But in states with particularly strong regulatory oversight, the proposed rates that were submitted early in the summer were significantly higher than the final approved rates. New York is an example: insurers in the state requested an average rate hike of 12.5 percent, but ultimately the state only approved an average rate increase of 5.7 percent.

For state-by-state data, ACAsignups is an excellent resource that includes an in-depth look at rate filings as they’re released by each state. In states that are using HealthCare.gov for enrollment, and in some state-run exchanges, the new rates won’t show up on the exchange site until at least the second week in November. But we’ve been keeping track of updates from each state’s Insurance Department to get an idea of what premiums will look like in 2015.

PricewaterhouseCoopers (PwC) LLP began tracking rate filings during the summer. The PwC data not only considers weighted averages based on each carrier’s market share, but they also look at the distribution of policies across the metal levels to get an even more accurate prediction of how the rate changes will impact the average policy-holder.

And their average after-subsidy premium was just $82 per month, which is 76 percent lower than the average retail rate of $346. For millions of low-income and middle-class households, the subsidies are taking a huge bite out of their health insurance premiums, and that will continue to be the case in 2015.

According to a Kaiser Family Foundation analysis of 16 major metropolitan areas, average after-subsidy premiums for people who purchase the second-lowest-cost Silver plan will actually decrease by 0.8 percent in 2015. (This is the same as the study’s finding on overall percentage decrease in unsubsidized premiums, but it’s a coincidence that the two numbers are the same).

But in many cases, the second-lowest-cost Silver plan – upon which subsidies are based – will be changing in 2015, which means that people may want to switch plans in order to optimize their subsidies.

Rates will vary, but everyone will have options …

Regardless of what the final average rate increase is, there will be plenty of variation from one policy to another. There are plans in some areas that will be increasing premiums by 30 percent, and other plans that will be decreasing them by 30 percent. But one very important thing to keep in mind is that all consumers who purchase their own health insurance can choose to switch to a new plan during open enrollment, and they can select from the full range of policies available in their area.

Prior to 2014, individual health insurance was medically underwritten in 45 states. That meant that if you had developed a significant pre-existing condition since you purchased your coverage, you were essentially stuck with the coverage you had, because other carriers would no longer accept your application.

And even if you had developed a not-so-significant pre-existing condition, you might still have been stuck with your current plan for all practical purposes, because other carriers may have only been willing to offer you a policy that excluded coverage for your pre-existing condition or charged you a significantly higher rate in order to cover it.

… not just the healthiest people

Before the ACA reformed the individual insurance market, only the healthiest people truly had the option to choose from the full range of available plans each year when they received their renewal rate increases. And let’s not forget that those rate increases were pretty hefty, year after year.

During the upcoming open enrollment period, everyone has the option to shop around, regardless of their medical history. Members of a plan that is going to have a large rate increase for 2015 can simply select a less expensive plan instead.

Some enrollees might decide they don’t want to change their coverage, particularly if it would mean switching to a new provider network. But thanks to the ACA, that choice now belongs to the consumer, which was not always the case prior to 2014.