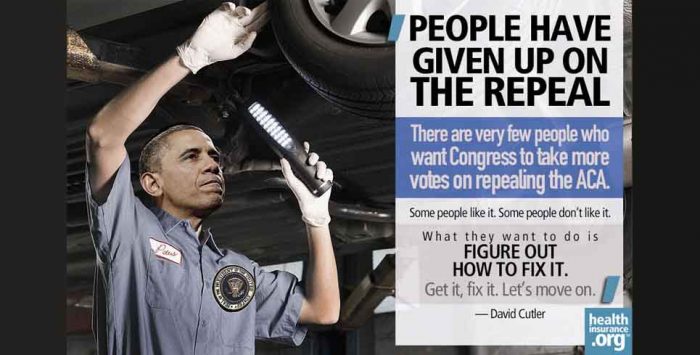 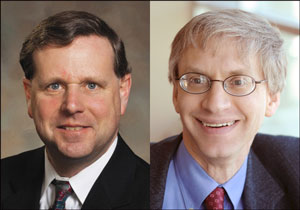 David Cutler is Otto Eckstein professor of Applied Economics at Harvard University. He served on the Council of Economic Advisers and the National Economic Council during the Clinton Administration and has advised the Presidential campaigns of Bill Bradley, John Kerry, and Barack Obama as well as being Senior Health Care Advisor for the Obama Presidential Campaign, where he played a key role in the design of what became the Affordable Care Act.

I caught up with him last week for a Curbside Consult, in which we discussed his new book, The Quality Cure, about the American health care system. In Part 1 of our three-part interview, we talked about what it might take to reduce waste in the U.S. healthcare system and what types of incentives might improve healthcare delivery. In Part 2, we talked about the fact that health care consumers are actually “price-responsive.” (The problem is getting consumers the cost and quality information they need to compare their options.”

Below is a transcript of our conversation. It’s been edited to make the translation between spoken and written English.

Harold Pollack: We’ve had such a nice conversation that I have to bring it around to a few icky subjects before I let you go. Why was the rollout of healthcare.gov so unbelievably screwed up?

David Cutler: It was really screwed up. It was terrible. It’s something for which all of us supporters took grief, and deservedly so. There were some external reasons and then some reasons internal to the administration.

The external reasons arose from the fact that Republicans were so universally opposed to it. So it was very difficult going. It was hard to manage things in advance, and so on.

These problems were dwarfed by the internal reasons. The administration never really thought about management as an area. That is, it never really said: We’re running a big new startup, and we should have someone who knows how to run a startup business doing it.

Instead, they kept the people who were there when the thing was passed and who understandably had an interest in hanging around and helping out. The administration said: why don’t you be in charge of it? There are different skills in life. The skill set of the people who were in charge was not centered in knowing how to run things.

Newspaper and magazine stories have chronicled the mistakes. If you read any management literature, many of these were of the sort that are not supposed to happen when you run a company. You’ve got to figure these things out. You have to know that these problems are occurring, and act to avoid them.

That was a real mistake, throughout the administration, in not recognizing that this was a very serious challenge that they had to face up to.

How to run complicated things

Harold Pollack: For those of us who teach in public policy schools, what lessons should we take from this about the craft of public management to minimize the chances that such bad implementation mistakes don’t happen again…? Are there ways that we should be teaching our students differently?

David Cutler: I have thought about this. As you know, I wrote a memo about this issue in 2010. It got me a little bit of notoriety [when it was leaked last year] which I would have preferred not to have had. We don’t teach our public policy students enough about how to run complicated things.

But then, the under-done part of the trinity is the management. That is, how to actually make it work. It’s often assumed that once you passed the law, you’ve done all the hard work. All along, I thought that healthcare reform was 30 percent legislation and 70 percent implementation. Newspapers and so on focus on the 30 percent that’s legislation, and they don’t really know how to deal with the 70 percent implementation, but that’s the job of a smart thinking administration, to really focus on that. I don’t know where along the way they fell off.

Harold Pollack: I do believe that the poisoned political environment makes this especially challenging. One way it made it challenging was that Republicans were always trying to sabotage the implementation of the new law. They are still trying to do that in very concrete ways, particularly in underfunding key pieces of the implementation effort.

If you’re trying to solve a really complicated set of challenges like the ACA, you really have to do that in a very pragmatic and transparent way that is very focused on how to identify and solve practical problems. If you’re always looking over your shoulder at a set of adversaries who are trying to shoot down what you’re doing, that’s just really hard to do.

It’s hard to be in the right mindset to do that because you’re always thinking about how every piece of information that you might publicly discuss might become ammunition for people trying to destroy the legislation.

David Cutler: The president made an interesting comment regarding his choice of nominees to replace Kathleen Sebelius as Secretary of Health and Human Services. He said, “I need someone who knows what they’re doing but someone who wasn’t involved in the passage of healthcare, because I need a fresh set of eyes here.”

I wonder if he would have been well served by doing that with regards to implementation a couple of years ago. He might have said: Clearly I need the people who are here because they know things about it. But I also need people who are not embittered or scarred too much by this process who can think outside the box and bring people together as a team with many other folks.

They might bring in technology people and say: “Look, I don’t need you to learn about politics. I need you to figure out how to do the technology and to work as part of a team on this.”

Harold Pollack: I think that’s wise. There’s another aspect of this, too. I need a group of people who can work well with the insurance companies who are political opponents in some ways, but who are also partners and actually executing much of what has to get done in this new law.

David Cutler: Correct. Having people who know the industries well, who know how to run businesses, it struck me at the time that that’s what should be done. I know they had some internal discussion about it. I don’t know why they never did that.

How to move forward

Harold Pollack: How are you feeling about ACA’s implementation as of May 2014?

David Cutler: It’s obviously better. The broken website was huge, and fixing the website is a very big deal. I would still like to see them go further. If you look at what the ACA is, it’s two laws put together in one.

One is to be able to cover people and set up insurance exchanges and regulate insurance and do the subsidies and all of that. Second is to be able to transform the delivery of healthcare into something that’s cheaper and better. Those are two in essence divisions of the company which is the Affordable Care Act.

If I were giving recommendations, I would say if you have two divisions, you should have two specific leaders, one in charge of each division. There should be one person whose sole job it is to figure out how we’re going to do all this coverage stuff, be in charge of the website, be in charge of the insurance relations and so on, someone who knows business, by the way.

Similarly, I need someone who can be in charge of transforming or at least helping, as the government does, to transform the healthcare system because that’s a really important thing to do too …

Harold Pollack: I wonder if some of the toughest challenges really reflect the depth of our political polarization, we really won’t be able to attack until President Obama leaves office because it’s such a centerpiece of his presidency.

David Cutler: I think that’s right. Although, what’s interesting is the movement of Republican governors into the Medicaid expansion is actually fairly impressive. You just had another one the other day, Governor Pence of Indiana.

Once you get out of Washington, going back a little bit, at the state level, they have to do stuff. Maybe they don’t want to help people, but if it turns out that it’s good to cover and you can convince them of that then maybe they’ll move along. I hope it’s going to be something where Washington is behind the times rather than ahead of the times.

Harold Pollack: Behind the times in the sense that there’s a lot of positive action that’s happening within state governments, within private healthcare organizations that’s really making a better and more humane healthcare system despite the disfigured environment of partisanship in Washington.

David Cutler: You see the same thing actually with the ACA itself. People have given up on the repeal. There are very few people who want Congress to take more votes on repealing the ACA. Some people like it. Some people don’t like it. What they want to do is figure out how to fix it. Get it, fix it. Let’s move on.

It’s a little bit the same way at the state levels. Many of them are saying: “Look, we’re just sick of this. If it’s the right thing to do, let’s figure out a way that it works for us and let’s do it and stop the endless parade of garbage.

Harold Pollack: One final topic before we stop. (There’s much in your book that we didn’t get a chance to talk about, and I’m sorry that we could go a whole other conversation talking about many aspects, comparing the US to Canada, for example,).

A sort of optimism really comes through in your book. A bunch of feasible things are actually being done to really improve our health care system. These are proliferating and becoming best-practice, becoming part of the culture of healthcare. I finished the book thinking that we face big challenges but we are going to have a much better healthcare system 10 years from now than we have today.

If we’re lucky, our health care system may even become more economical, at least one in which dramatic increases in costs that we’ve gotten so used to over the past couple of decades has abated some.

Harold Pollack: I should end by noting that you and I have known each other a pretty long time. I’ve worked with you in a minor way on some of the things that we’ve talked about today. When I see the tens of millions of people who have health insurance because of ACA, I hope that you feel good about the role that you’ve played not only in the quality area, but also in getting that critical 30 percent of the legislation done so that we move closer to universal coverage. I think you should be very proud of that.