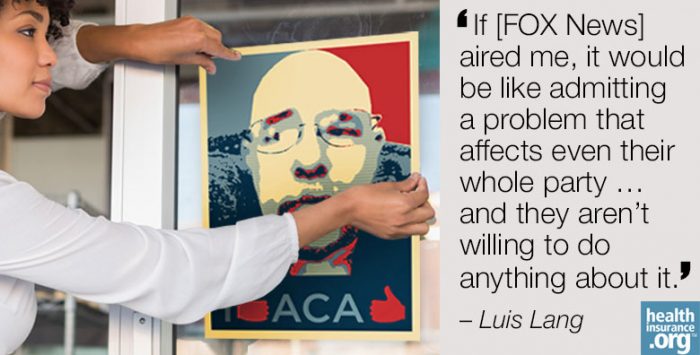 A week after Luis Lang’s story went viral, he’s had a change of heart about Obamacare. OK, that’s an immense understatement.

The South Carolina man told me yesterday that he’s reached out to FOX News, to ABC, to MSNBC’s Rachel Maddow Show. He’s been calling the Democratic National Party. Could I help him get word to the media or DNC?

“Tell them you have someone who wants to talk and wants to be the poster child,” he told me.

That’s right. Lang wants to be the “poster child” for a government safety net that he has recently called a “complex and flawed bill.” Since his GoFundMe campaign went viral on May 12, he’s had conversations – most notably conversations with Harold Pollack – that have made him rethink not only his disdain for the law, but his entire political philosophy.

“My wife and I sat down and were looking at our values and we said, ‘We’re not Republicans. We’re Democrats!’

Capitalizing on his high profile

Lang says a lot has changed since his story started trending on May 12. For one thing, he feels that people who initially misunderstood him – and posted comments “bashing the hell out of me” have also had a change of heart. They’ve “sent me private messages apologizing to me, saying they didn’t know the whole story. It was a total turnaround.”

And while the public responses include some that have been painfully critical – one visitor advised, “Sell your house,  you irresponsible moocher” – he says now he’s been encouraged to use his visibility for good. “Comments I’ve been getting personally and on GoFundMe are telling me to take advantage of that publicity – that I should be the poster boy for the ACA.”

Lang’s taken that suggestion to heart and wants to reach out to others just like him who have misjudged the ACA. “So many people as far as Republicans are in the same position as me. They’re not political. They didn’t do any research [on the law] … and they listen to FOX News. They’re getting misinformed.”

Mostly, he says, people need to stop making decisions about the law based on politics. “They need to stop listening to politicians and do their own research,” he says. “I would tell people, ‘you’re talking to someone who was like you. I can see clearly now. The politics are gone.'”

Is FOX News blocking his calls?

While the self-employed South Carolina man has been working the phones to secure a spot on national television, so far, he feels he’s been ignored. FOX News (including The O’Reilly Factor), in particular, has turned a deaf ear – and he says that’s not surprising.

“FOX News doesn’t have the guts to put me on because I’m a hot potato for them to the point where they’ve blocked my number,” Lang says. “They won’t touch me because they’re so far to the right. If they aired me it’s like admitting a problem that affects even their whole party … and they aren’t willing to do anything about it.”

But Lang says he’s received enough encouragement to believe that his supporters could push him into the national television spotlight. “Tell [your readers], ‘Call your local station and demand that they put me on. If enough people call, they will cave.”

Why? “I want to talk about the coverage gap I’ve fallen into so that others will not fall into it.”

Whether Lang gets his 15 minutes on national television or not, he’s not receding from public view soon – and his crowdfunding isn’t over either.

Now, less than $5,000 from his original $30,000 goal, he says he’ll have to update his GoFundMe goal. The new total will reflect a more realistic bill he expects to face for more extensive treatment than he’d anticipated. He also hinted that the total could go higher, depending on a doctor’s assessment of new symptoms of what he suspects is kidney disease.

Will his appeal for more donations – and his newfound appreciation for the ACA – draw emotional responses? Almost surely, some will continue to see him as an opportunist. (An extreme example: Local police had to get involved after his wife received a threatening phone call: “The guy said ‘he needs to stop being a freeloader and a moocher. If he keeps complaining about his eyes, I’m going to poke out his eyes.'”)

But others will likely applaud Lang’s apparent determination to help others who may be missing out on the ACA’s benefits – “if I can even help just one person not go through the hell I’ve gone through.”