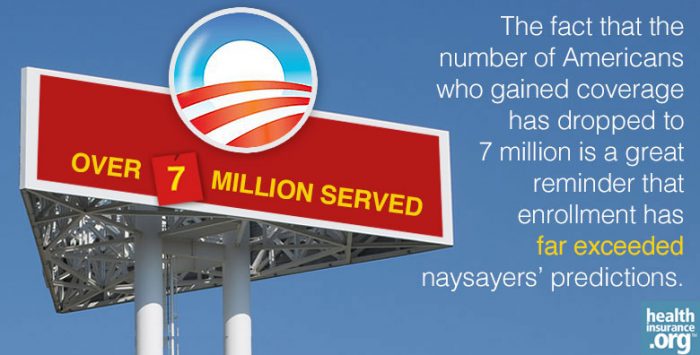 Last week, I posted an entry which I hyped up to an unusual degree (even for me) about the number of people currently enrolled in ACA exchange QHPs appearing to have dropped down to somewhere between 6.8 and 7.0 million as of September, down some 14 percent or so from the official “8 million enrolled!” number from back in April.

Anyone who knows me knows that I wasn’t hyping this point in order to bash the success of the exchanges. I did so because I put considerable effort into tracking down the current enrollment data and feel that it’s important to have an idea of where things stand before #OE2 kicks off. You have to have an accurate baseline in order to understand what to expect in the next phase.

As I mentioned in my previous post, conservative pundits and right-slanted media immediately pounced on my “dipped below 7M” post from Thursday as evidence that “Obamacare is falling apart at the seams!”

The good news is that yesterday, HHS released the encouraging news that the number was still at 7.1 million as of October. (And as I noted at my site, this means that there was a bit of a drop, but not nearly as significant one as limited state-level data was indicating.)

But the fact of the matter is that yes, there has been some attrition. And here’s why that doesn’t mean Obamacare is “falling apart at the seams.”

First: The main causes of the drop-off appear to mainly be one-time issues.

As you can see from my updated Graph, current enrollments were actually steadily rising up until August. In addition to the 12 percent or so of enrollees who simply never paid their first premium, there appear to be three main reasons why it’s dropped off since April:

The first two of these should be reduced considerably this year as the enrollment/data verification process is streamlined and improved. (That is, fewer people with data issues should make it through the verification process in the first place). The last issue will probably be a continuing one year to year, but even so doesn’t appear to be massive … perhaps 3 to 4 percent of the grand total.

So, going forward, it might be a good rule of thumb to simply assume that around 10 to 12 percent of the total won’t pay the first month, and the number remaining will gradually drop by another  2 to 4 percent over the course of the year … until the following open enrollment period starts up again. Lesson learned.

Second, there’s nothing necessarily “wrong” or “bad” about some people dropping their exchange policy.

What if they turned 65 and have moved to Medicare? (As I’ve noted before, roughly 2.5 percent of the original 8 million enrollees were 64 at the time, which means that somewhere between 100,000 and 200,000 have likely turned 65 since last winter/spring.) What if they got a job with employer-sponsored coverage? What if they married someone who has coverage through their job? What if they fell on hard times and had to move to Medicaid? What if they moved out of the country? What if they happened to die? (Hey, it does happen to all of us.)

All of the above scenarios are either good (getting married, getting a job with ESI) or, at worst, neither good nor bad, they just … are. The whole point of insurance is to provide a safety net for however long you need it before moving on to something else (hopefully something better).

The fact that we already had a mish-mash of different types of healthcare coverage before the ACA means that very few people have kept the same type of coverage from birth to death anyway. As you age, as you change jobs, as you go through other life changes, you’re going to naturally switch from your parents’ plan, to your own through a job, or through your spouse, or through public programs, and then eventually to Medicare.

Attrition will likely be negated

The three points above being stated, I still suspect that the drop of a few hundred thousand people this fall is about to be more than overwhelmed during the second open enrollment period. By how much, I can’t say yet (partly because I obviously don’t know for sure; partly because I’m saving my personal prediction for a separate post this week), but I think it’s safe to say that the number of enrollees (yes, even paying enrollees) will be considerably higher by next February than it is today.

And fourth: As I mentioned in my column yesterday, there never was a “magic number” in the first place. The 7 million mark was a CBO estimate of people who were likely to enroll in the first year.

Even the ‘drop-off’ screams success

Finally, focusing on the fact that natural and expected attrition has reduced to around 7 million the number of individuals who have gained marketplace coverage is a really great reminder that exchange enrollment numbers have far exceeded naysayers’ predictions. I quoted this ASPE Issue Brief in a column Monday, but it bears repeating here:

The Affordable Care Act is achieving its central aim: millions of Americans who were uninsured before now have access to affordable, high-quality health care. The number of uninsured people in the U.S. has decreased by nearly 26 percent over the past year.