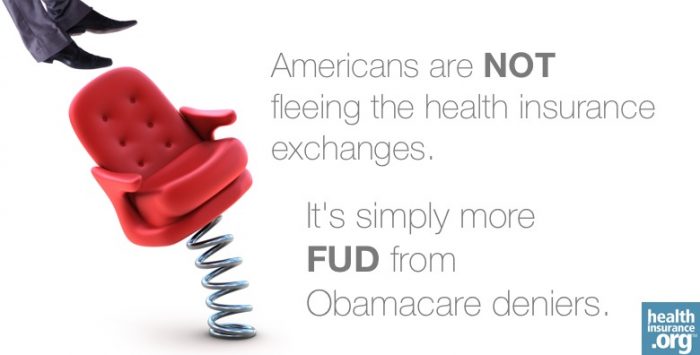 Not surprisingly, ACA opponents are using this study as proof that the exchanges are a failed venture.

Such conclusions are flawed though, for numerous reasons.

Some ‘users’ didn’t use the exchange sites

The survey included people who had visited an exchange website during the first open enrollment, regardless of whether they ended up purchasing a plan. Our brokerage often gets calls and emails from people who already have coverage through their employer but are interested in shopping around to see if they can get a better deal in the individual market. In most cases, they find that staying with their employer’s plan is their best option.

How many of those 558 people visited the exchange last fall, found out their current plan is a better option, and simply don’t need to go back again because their question has already been answered?

And what about the people who were eligible to keep individual grandmothered plans for 2014, but visited the exchange to see alternative options? If they didn’t qualify for subsidies, they probably found out that their grandmothered plan was the least expensive option. In many states, they have the choice to keep those grandmothered plans again for 2015, so maybe they’ve already decided that’s what they’re going to do (although they would be wise to check again – they may find the price gap has narrowed).

Subsidies will change some minds

I also wonder how many of the survey respondents who indicated they are not going back to the exchange will end up changing their minds. A study from earlier this year got less media attention but seems particularly important in light of the Bankrate survey.

In the Bankrate study, just 53 percent of respondents with incomes under $30,000 said they plan to go back to the exchange during open enrollment. But as long as they are legally present in the U.S. and not eligible for affordable employer-sponsored coverage, a significant portion of those respondents are eligible for subsidies in the exchange.

(The rest are either eligible for Medicaid or are in the coverage gap. In the latter case, they have a good – although tragic – reason for giving up on the exchange, since they’re not eligible for assistance. The ACA would have helped them, but their states chose to opt out of Medicaid expansion). Based on the results of the KFF study, a good chunk of the subsidy-eligible survey respondents might not know about the subsidies, even if they’re currently enrolled in an exchange plan and receiving premium subsidies

Many won’t need exchanges to get coverage

Some of the subsidy-eligible folks may have since obtained employer-sponsored insurance, but it’s possible that others are planning to shop for coverage outside the exchange. And given the results of the Kaiser Family Foundation study, a lot of them might be surprised to learn how high their premiums will be if they stray from the exchange.

We also have to keep in mind that the individual health insurance market has historically been very dynamic – people move in and out of it all the time, and the ACA doesn’t change that. If we consider the population that had individual coverage at the start of 2010, only 48 percent of them were still in the individual market two years later. This is understandable when we consider that people use individual policies as transitional coverage when they’re in between jobs, and also the fact that self-employment is notoriously rocky and includes a constantly shifting population.

As the Bankrate study authors noted, a lot of exchange enrollees might be planning to let their current plans automatically renew. In most states, you can do nothing and your coverage will automatically renew. (Our new free ebook explains how renewal works in every state).

But defaulting to auto-renewal is generally a bad idea, as rates are changing with most carriers and subsidies will be based on new benchmark plans in many areas. The good news is that people who opt for auto-renewal and then find themselves with a higher-than-expected bill in January will still have time to select a different plan before the end of open enrollment on February 15.

All of this data has to be taken into consideration when we peruse the Bankrate study results. When we look at the big picture of the individual health insurance market, consumers’ understanding of subsidies, the fact that the survey included anyone who visited the exchange sites – not just those who purchased plans – and also the fact that auto-renewal for 2015 will be possible – although not advisable – for most enrollees, we shouldn’t be surprised by the finding that half of the survey respondents aren’t planning to go back to the exchange during the 2015 open enrollment period.

That’s just the nature of the individual health insurance market. And although many of last year’s users might not need to return to the exchanges, they will be replaced by people who are newly in need of individual coverage or who remained uninsured in 2014.