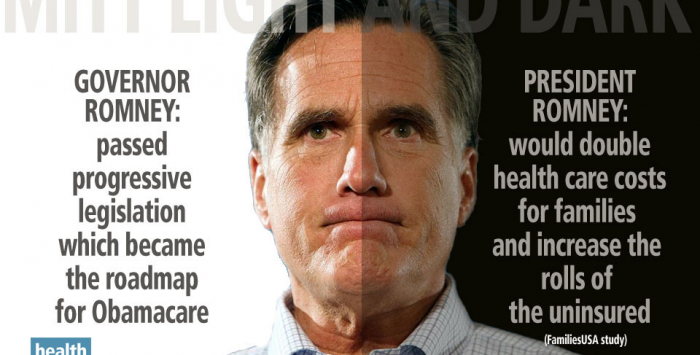 We are at a crossroads in this country in terms of the direction we will take on health care. Each of the presidential candidates has presented his plan and it will be up to us, the American people, to choose the direction we want to go. We at Families USA wanted to better understand the implications of the choices in front of us.

Our new report, Obamacare vs. RomneyCare versus RomneyCandidateCare: A National and State-by-State Analysis, analyzes and compares the benefits and costs among three different plans: RomneyCare, the Massachusetts Health Insurance Law signed by then-Governor Mitt Romney in 2006; ObamaCare, the Patient Protection and Affordable Care Act, signed into law in March 2010; and RomneyCandidateCare, the health care plans Governor Romney has proposed in his presidential campaign.

This might give us the impression that Romney would do something similar for the nation should we elect him in November. That impression could not be farther from the truth.

Families would pay the price

As the Republican presidential candidate, Governor Romney has stated he would repeal ObamaCare – including all of the key protections for consumers and all of the new pathways to affordable coverage. In addition to weakening consumer protections against insurance company abuses, Romney has also vowed to eliminate the premium tax credits that would help middle-class Americans purchase private health insurance. Instead, he would give tax deductions for coverage to fewer Americans. Not only would this policy reduce by half the number of people eligible for help with the cost of premiums, but it would also significantly lower the value of the help they would get. RomneyCandidateCare would make health coverage much less affordable and much less available for millions of Americans.

Ultimately, families who purchase their own coverage would spend almost twice as much on premiums and out-of-pocket costs under RomneyCandidateCare than under ObamaCare. In some states, spending would be even higher: In North Carolina, average spending on health care in 2016 under Romney would be $14,658, compared to just $4,908 under ObamaCare.

States would feel the brunt

RomneyCandidateCare also hurts states. Romney plans to dramatically cut the amount of federal support that states receive to run their Medicaid programs and make it incredibly difficult for them to maintain current coverage levels in their state. Ironically, these changes would make it nearly impossible for reforms like RomneyCare in Massachusetts to continue to be successful, let alone allow or encourage similar reforms in other states. You would think the Governor would want to ensure the success of the health reform law he passed in Massachusetts, but the policies he is putting on the table would damage Medicaid program there and across the country.

Number of uninsured would actually increase

By 2016, ObamaCare would decrease the number of uninsured by 30.7 million, taking the United States a tremendous step forward in ensuring that everyone has access to health care. In contrast, under the policies that Romney has been talking about on the campaign trail, the number of uninsured in the U.S. would increase by 11.2 million by 2016. There would be 50.9 million more uninsured Americans in 2022 with RomneyCandidateCare than ObamaCare. Is that really the direction we want our country to go in?

With less than 50 days left before the election, it’s our time as Americans to seriously think about what kind of country we want to live in. In November, we will have a choice between two vastly different visions for what health care will look like in 2016. Romney’s Massachusetts health reform is simply not the health reform he plans to take to the White House. All Romney has promised is higher out-of-pocket costs, higher costs for preventive services and prescription drug coverage for seniors, and that millions more Americans will be unable to get affordable health insurance. Is that the future you want to help create?