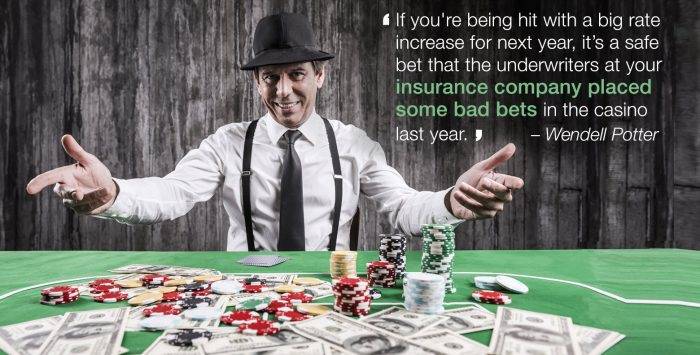 Minnesotans who get health insurance through the individual market last week became the latest in the country to get unwelcome news: the cost of their coverage will likely go up significantly next year. According to the state’s Commerce Department, which regulates insurance in the North Star state, some customers of Blue Cross and Blue Shield of Minnesota may see their premiums jump nearly 50 percent beginning January 1.

A couple of months ago, the Wall Street Journal predicted that residents of several other states will also likely experience similar rate shock. Under the headline, “Insurers Win Big Health Rate Increases,” the Journal reported that regulators in Idaho, Kentucky, Michigan, Oregon and Tennessee had given the green light to premium increases ranging from 11.4 percent to 36.3 percent for coverage in 2016.

The answer is yes. And although it won’t be much comfort to the folks who will be getting letters from their insurers telling them that they’ll have to shell out quite a bit more money for their coverage next year unless they switch plans, rate increases for most people will be relatively modest. And some lucky folks will actually get the happy news that their premiums will go down next year.

Why the wide variation in 2016 rates?

There are several reasons for the wide variation in 2016 rates across the country, but there is one thing that all those reasons have in common: the U.S. health insurance business – especially the individual insurance business – is one big casino. And it is in that casino that people you probably will never meet are placing bets this time of year that will ultimately determine what your coverage will cost in the future. There is no escaping this casino. Even you, when you are at the point of picking a health plan, have to go to Vegas.

This big-time gambling is uniquely American. It’s one of many things that set our health care system apart from those in the rest of the developed world and is why health plan enrollees in the United States have no assurance that coverage they consider affordable this year will be affordable a year from now. Or even three months from now.

Bottom line: If you are being hit with a big rate increase for next year, it’s a safe bet (no pun intended) that the underwriters (a.k.a., bean counters) at your insurance company placed some bad bets in the casino last year. Either that or they’re able to game the system to your disadvantage, as I’ll explain shortly.

Here’s how the casino works in the individual market. The underwriters base their bets on a number of factors, some backward looking and some forward looking. They scrutinize spread sheets that show how much their company paid out in claims over as recent a period of time as they can get their hands on. If they have a full year of claims data, the better they can speculate with some reliability what next years’ “claims experience” will look like.

They’ll also spend a lot of time analyzing the composition of what they call the “risk pool.” In other words, they’ll pay close attention to the age and health status of the people enrolled in a given plan during a given (and recent) period of time. If the pool comprises folks who are older and sicker than they had expected this time last year, and the company consequently had to pay more claims than it had thought it would have to pay out, you can bet that the underwriters will recommend a sizable rate hike under the assumption that the risk pool next year will look pretty much like it did last year.

They’ll also look at recent administrative expenses associated with a given health plan. If they were higher than expected, expect that to factor into your premiums for next year.

Those are all backward looking. The underwriters also consider what is referred to in the industry as “medical trend.” For example, they’ll have a pretty good idea of how much prescription drugs will cost the company next year. They’ll also have a pretty good idea – based in part on information from their coworkers in provider contracting – how much doctors and hospitals will charge the insurer for treating health plan members next year.

Generally speaking, the bigger an insurer is in a given market, the better able it is to negotiate favorable rates from local providers. That doesn’t mean, however, that your insurer will pass on to you any savings it scores at the negotiating table.

After crunching all of this backward- and forward-looking data, the underwriters will make recommendations to senior management about how much the company should alter premiums for the coming year to ensure a profit.

In addition to all of this, you’ll also get a rate increase just because you’ll be celebrating another birthday next year (Lord willing). Insurers charge people who buy coverage in the individual market more as they get older. Fortunately, the Affordable Care Act restricts just how much more they can charge you.

Before the ACA, insurers in most states could charge older folks five times as much as they charged younger people for the same coverage. Some states didn’t even have a limit. Now insurers can only charge you three times as much. The age-based increases are on a sliding scale, which means you’ll pay a little more every time you blow out the candles on your birthday cake. And if you’re 30-something now, expect to pay a lot more when you’re 50-something.

It’s important to keep in mind that the ACA didn’t create the health insurance casino. It has existed for decades. The ACA did change some of the house rules, however, to make it possible for more people to get coverage. Insurers can no longer deem you “uninsurable” because of a pre-existing condition. They can’t even charge you more just because you’ve been sick in the past or have a chronic condition. And millions of low- and middle-income folks can now get a subsidy from the government to help them pay the premiums.

Another reason premiums in the individual market are higher for some people than they used to be is the fact that a lot of the people who can now buy coverage through the ACA-created exchanges are people who were previously blackballed by insurance companies because of their health status. The percentage of young and healthy people in pre-ACA risk pools was higher than it is today because in the old days, insurers kept less healthy folks from even getting in the pool.

In addition, insurers can no longer sell low-premium “junk” insurance. The ACA requires all health plans sold through the exchanges to offer a set of “essential benefits.”

Yet another reason for some of the eye-popping rate increases that led to headlines in Minnesota and the Wall Street Journal is the fact that some of the big insurers in some markets gamed the system when the exchanges went online in 2014 by engaging in predatory pricing to keep smaller competitors small. Some of the big Blue Cross plans were suspected of offering health plans with low premiums, knowing they would take a loss the first year, just to discourage people from enrolling in competitors’ health plans. In my opinion, that’s why many of the biggest rate increases for both 2015 and 2016 have been big Blue Cross plans.

In fairness, because the exchanges are still relatively new, insurers don’t have as much risk pool data as they had pre-ACA. After this year, however, their bean counters will be able to make bets in the casino based on a lot more information.

All this said, as I noted earlier, rate increases for most folks next year are expected to be in the single digits, and some people in some markets will even see their premiums decrease. That’s because the bean counters at most health insurers did a much better job looking both backward and forward than the bean counters at the insurers that are charging a lot more next year.