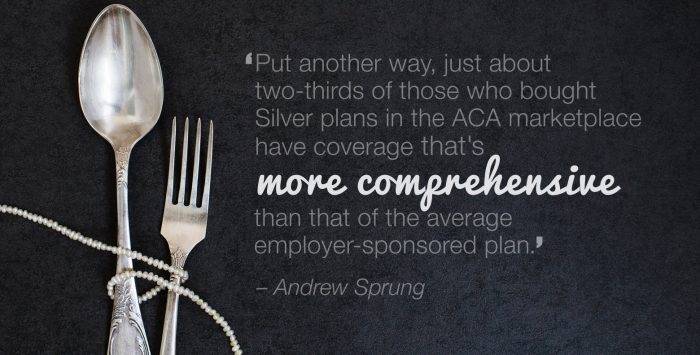 A new study claims to show that in Silver plans – the most popular type sold in the ACA marketplaces – “out-of-pocket expenses for medications … are twice as high as they are in the average employer-sponsored plan.”

That’s a quote from the abstract of the study, conducted by an Emory University research team led by Kenneth Thorpe, chair of Emory’s health policy department, and published in Health Affairs. But that claim is highly misleading. In fact, most holders of Silver plans purchased in the ACA’s marketplaces have more comprehensive overall coverage than most people with employer-sponsored insurance (ESI). And there’s no evidence that these Silver-plan holders’ drug coverage is less comprehensive than that of the typical ESI plan.

Depends what your definition of ‘typical’ is

To construct a “typical” Silver plan, the study’s authors assumed a plan that would cover 70 percent of the average user’s annual medical costs – that is, a plan with an actuarial value (AV) of 70 percent. That’s the AV mandated by the ACA for Silver plans – if those plans are not enhanced by cost-sharing reduction (CSR) subsidies. Deep in the article, however, the authors acknowledge that “87 percent of the people currently enrolled in Silver plans were eligible for the [CSR] subsidies.” (CSR is available to low-income marketplace customers only if they select Silver plans.)

The percentage of Silver-plan buyers in the marketplace who get CSR is actually down to 82.4 percent, according to the most recent enrollment figures. About 80 percent of those enrollees have incomes below 201 percent of the federal poverty level (FPL) and have therefore obtained really “strong” CSR. (A weaker benefit is provided to those between 200 and 250 percent FPL.)

For buyers with incomes up to 200 percent FPL, Silver plans have an actuarial value superior to the average employer sponsored plan – either AV 94 percent or AV 87 percent, depending on income. The typical employer-sponsored plan, according to the Emory authors, has an AV of 83 percent.

Put another way, just about two-thirds of those who bought Silver plans in the ACA marketplace have coverage that’s more comprehensive than that of the average employer-sponsored plan. But you’d never know that from the news coverage. Here’s how the Emory research was presented by Kaiser Health News, usually the gold standard in healthcare reporting:

Chronically ill people enrolled in individual health plans sold on the Affordable Care Act insurance exchanges pay on average twice as much out-of-pocket for prescription drugs each year than people covered through their workplace, according to a study published Monday in the Health Affairs journal.

Patients with at least one chronic condition such as diabetes or asthma pay on average $621 out-of-pocket for prescription costs on the popular, mid-priced Silver exchange plans compared to $304 for those with employer coverage, researchers at Emory University in Atlanta found.

Not true. Not so. Not right. Let’s contrast the researchers’ “typical” Silver drug coverage to what two-thirds of marketplace customers with Silver plans (those whose incomes are under 201 percent FPL) are actually likely to pay.

To construct their “composite” Silver plan, the researchers took the average deductible for a Silver plan unenhanced by CSR, $2,100, and average drug copays for four “tiers” of coverage – $10, $50 and $75 copays for generic, preferred, and non-preferred brand name drugs, and 30 percent coinsurance for specialty drugs.

In Miami and Houston in 2015, the benchmark Silver plan for the person earning $17k has a deductible of…$0. The drug tiers? For generic drugs, $3; for preferred brand name, $8; for non-preferred, 10 percent; and for specialty, 10 percent. In LA, too, there is zero overall deductible, and just two drug tiers: generic ($3) and preferred ($5).

What the researchers meant by “typical”

Somewhat obscured in the Emory researchers’ writeup is their ostensible focus: What would happen to those who get their insurance from their employers if their employers drop coverage and dump them in the marketplace? The authors highlight the Congressional Budget Office’s estimate that by 2018, the ACA will reduce the ranks of those with employer-sponsored insurance by about 8 million, from 164 million to 156 million. They justify comparing ESI to a Silver plan unenhanced by CSR by pointing out that about 80 percent of those with ESI have incomes too high to qualify for cost-sharing reduction.

That may be so. But CBO specified that to the extent the ACA may prompt a modest number of employers to drop coverage, primarily low-income workers would be affected. And so far, very few employers, if any, seem to have dropped coverage since ACA enactment. To focus on the prospective plight of relatively well-paid workers whose employers drop coverage seems a bit theoretical.

The Emory study usefully highlights the extent to which limiting drug coverage for people with chronic diseases can be counterproductive, causing patients to skip medications that can prevent major health crises like heart attacks. It also spotlights a potentially troublesome trend in ACA marketplace plans: the subjecting of drug costs to the plan’s overall deductible. That deductible is indeed high for too many Marketplace customers – most notably the two million who bought the lowest tier Bronze plans.

But like all too many analyses of the ACA, the study obscures the vital role that cost-sharing reduction subsidies play in making healthcare affordable for a majority of marketplace customers.