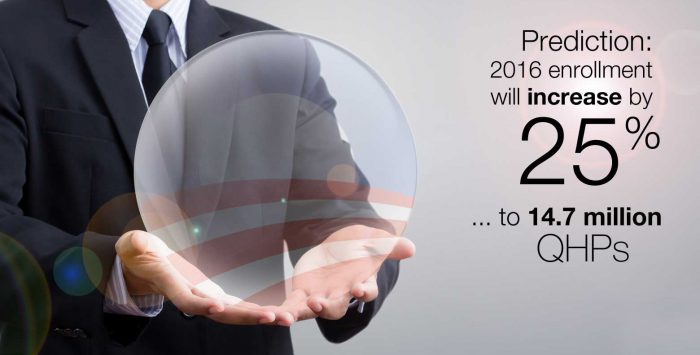 When I started tracking private ACA exchange enrollments two years ago, I didn’t intend on predicting how many people would do so. The point was to track how many did in real time, since no one else was doing so.

However, in late December 2013, I took a crack at predicting how many people would get in under the wire in time for January 1st coverage. I ballparked it at 2.1 million … and it turned out to be 2,137,630. I ended up being within 1 to 2 percent of the actual numbers for the rest of 2014 … but I also never tried calling my shot more than a month ahead of time.

For 2015, I decided to try something bolder: predicting the final tally before the season even opened. I settled on 12.0 million, but after a better-than-expected first month, I bumped this up to 12.5 million. The official tally, however, fell short of both of these at 11.7 million. I had overshot by 6.5 percent (which still wasn’t bad considering I was looking three months out at the time).

So. Here we are with the 2016 open enrollment period bearing down on us. The only official projection I have comes from the CBO’s March 2015 ACA Baseline.

As of March, the Congressional Budget Office was projecting that 21 million people will enroll in private healthcare policies (qualified health plans or QHPs) through the ACA exchanges for 2016 … nearly doubling their projection for this year and tripling their original 7 million call for 2014.

Before I go any further, let me say this flat out: No. Actual exchange enrollments in 2016 are not going to reach the CBO’s 21 million projection. They simply aren’t. I’d love to be proven wrong on this, but I simply don’t buy it.

Still, why are they so confident about that number … and why could that confidence be misplaced?

5 reasons to be optimistic about #OE3 enrollment

… and 5 reasons NOT to be too optimistic:

It’s important to note that both ESI retention and  New York’s HP program are GOOD THINGS for overall health insurance coverage, even if they “harm” the ACA exchange numbers.

And the result is …

Add all of these up and what do I think is likely to happen over the next three months?

Well, let’s look at who’s eligible and/or likely to enroll. 2016 enrollment will be made up of a combination of current enrollees renewing/switching exchange policies and new enrollees joining the exchanges, either from the ranks of the uninsured or transferring from other coverage.

Last year, 6.3 million people renewed their policies vs. 8.0 million who had selected QHPs during 2014 open enrollment (78 percent). A similar ratio this year would be around 9.1 million (vs. 11.7 million). Alternately, I could also assume a 90 percent retention rate of the 9.95 million who were still enrolled as of June 30, which would give me around 8.9 million. Either way, I’m guessing around 9 million 2015 enrollees will renew for 2016.

The new additions fall into two categories: Uninsured and Currently Insured. Currently Insured mostly refers to the 2-3 million (estimate) people still enrolled in transitional policies. Most of those policies are still valid through 2017, but some are being cut off this winter, and anyone who has to drop a transitional policy for personal reasons (moving, getting married, etc.) will have to switch to something else. The same is true for those still on grandfathered policies. I’m going to assume that perhaps 500,000 make the move from grandfathered/transitional policies for 2016. In addition, I’ll assume that perhaps 1 million are shifted from their current employer-sponsored insurance over to an ACA exchange policy.

That leaves the main target this year: The Currently Uninsured. Just a few days ago, the Kaiser Family Foundation issued a new detailed report breaking out the 32.3 million still-uninsured into different categories. This is important because not everyone who’s uninsured is eligible to enroll via the ACA exchanges … and not all of those who can do so are eligible for financial assistance. You have to subtract out people in the Medicaid gap and undocumented immigrants. You also have to subtract those who are eligible for either Medicaid or CHIP since we’re only talking about private exchange policies here.

That’s around 15.8 million uninsured people who could potentially enroll specifically via the exchanges. (They could also enroll directly through the insurance companies, bypassing the exchanges, although the first group would be missing out on financial assistance if they did so.) However, that doesn’t mean that all 15.8 million will. That’s the trickiest part to project.

I’m going to be optimistic and assume that the exchanges manage to sign up half of the first group this year (around 3.5 million) and perhaps 15 percent of the latter two groups (700,000 and 400,000 million respectively).

Subtract out a couple hundred thousand more who will be moving to the Basic Health Plan in New York and the grand total would become something like:

(14.7 million would also just happen to be about a 25 percent enrollment increase over 2015, for what it’s worth).

So now, let’s sit back and see what happens …