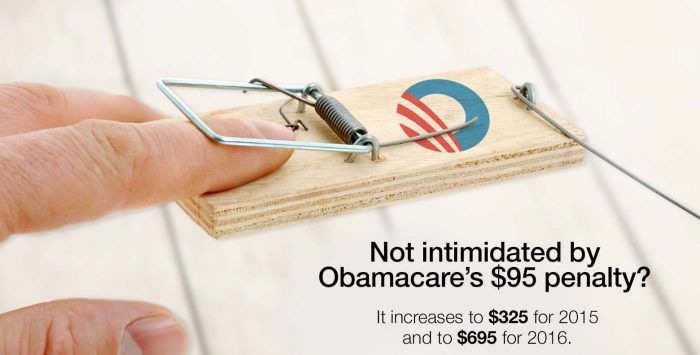 Moments ago I received Yet Another Reminder® from HealthCare.gov:

Coverage that’s right for you

Now’s the time to sign up for health coverage! Come back to HealthCare.gov to join the millions of people who have found quality and affordable coverage. We’ve rolled your information over into your 2016 application and it’s ready for your review.

Get covered and save: 8 out of 10 people who enrolled in a health insurance plan qualified for financial help. In fact, most people can find plans for $75 or less per month.

Submit your application and see what you could save in 2016.

Don’t miss your chance to get affordable coverage – sign up for a 2016 plan today!

You’ll note that HHS is still pushing the “financial help for 80%, most can get a plan for under $75/month” angle, otherwise known as The Carrot. There’s nothing wrong with doing this (well, aside from not addressing the “high deductible” issue), but most interested parties assumed that they’d be pushing hard on the increased individual mandate penalty for not having ACA-compliant coverage this year … aka, The Stick.

As a reminder, here’s a simplified breakdown (assuming you don’t qualify for an exemption):

Obviously there are exceptions to the above; besides financial hardship (ie, the least expensive qualifying policy is still more than 8% of your income even after tax credits), you’re also exempt from the penalties above if you’re in jail, a Native American, have certain religious objections and so forth. The main points here, however, are:

1. The penalty is a lot higher this year.

The big concern here is that many people will be “a year behind” in their thinking, either not knowing that the penalty has increased at all, or not realizing (assuming they’re still not enrolled by then) that by the time they pay the tax for last year, they already owe an even higher fee for this year as well. In other words, get covered for 2016 NOW.

As Kaiser Family Foundation’s Larry Levitt noted this morning, “lack of awareness of the mandate makes it less effective as a tool to increase enrollment.” Like the “Doomsday Machine” in Dr. Strangelove, the whole point of any sort of incentive/penalty is lost if people don’t know it exists.

Of course, as Levitt also noted, they also have to proceed with caution here, because the individual mandate penalty has been among the least popular provisions of the ACA since day one, so they’re obviously reluctant to push it any more than they have to.

My advice to the HHS Dept.? Keep pushing The Carrot for the next three weeks (through the December 15th deadline for January 1st coverage), but then immediately start pushing The Stick hard right up until January 31st. Remember, there’s currently a grace period for the mandate tax, so those who enroll between December 16, 2015 and January 31, 2016 still won’t have to pay it as long as they’re covered for the year by March 1st.

My advice to everyone else? GET COVERED NOW anyway. Accidents and illnesses can happen in January or February as well, after all.