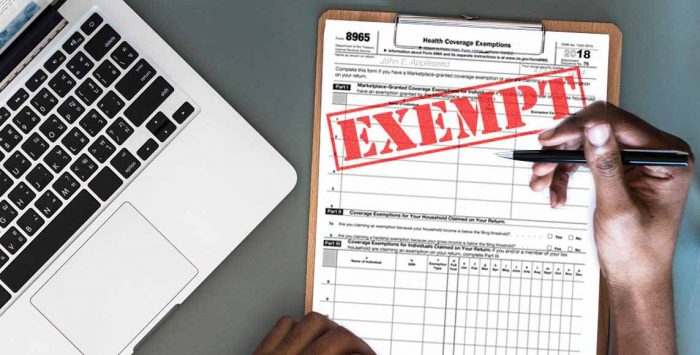 Although there's no longer a federal penalty for being uninsured, some states now have their own individual mandates – and exemptions.

The individual mandate – and exemptions

Under the Affordable Care Act (aka Obamacare), most Americans are required to maintain health insurance. And from 2014 through 2018, there was a tax penalty for non-compliance.

During this time, however, many Americans were able to get exemptions from the individual mandate penalty. The exemptions included:

The ACA’s individual mandate penalty was eliminated at the end of 2018, as part of the Tax Cuts and Jobs Act. So although there is technically still a requirement that people maintain health insurance coverage, there is no longer a penalty for being uninsured. Does that mean there is no longer a need for exemptions? Not exactly.

For starters, a growing number of states are imposing their own individual mandates and corresponding penalties.

Residents in Massachusetts, New Jersey, and DC are required by state mandates to maintain health insurance in 2019 (and future years) or face a possible tax penalty when they file their state/district tax returns in early 2020.

Starting in 2020, residents in Rhode Island and California will also be required to maintain health insurance or face a potential penalty. Vermont is also implementing an individual mandate in 2020, but has not yet established a penalty for non-compliance. (This may be reconsidered during the state’s 2020 legislative session, so there’s a possibility that a penalty will be added for future years.)

And although the specifics vary from one state to another, each of these states has an exemptions/appeals process that residents can use. Click on the following links for details regarding individual mandate penalty exemptions:

The guidelines of those hardship exemptions (which includes affordability exemptions) have, in fact, survived – but they’re now being used to determine eligibility for people age 30 and over who want to purchase a catastrophic health plan. That’s because catastrophic plans can only be purchased by those under 30 and people who have a hardship exemption from the ACA’s individual mandate.