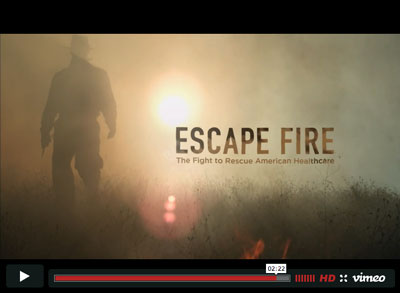 I’m often asked what I think of Obamacare.

I tell people it’s as good as far as it goes. It will provide coverage for millions of uninsured Americans, and it will make many of the most egregious practices of the health insurance industry a thing of the past, like dropping people from coverage when they get sick and charging older people up to ten times as much as younger people for the exact same policy.

But I always add that Obamacare is just a start. That’s because, even though the law does much good, it doesn’t address many of the structural problems that make our system unique, but not in a good way. So even though millions more Americans will have access to care when Obamacare is fully implemented, the question is, access to what?

You’d think that the country that spends the most on health care – that would be us – would have the world’s best health outcomes. Far from it.  We rank near the bottom among developed country in most measures, life expectancy and infant mortality.

Escape Fire, The Fight to Rescue American Healthcare, describes how health care in America has turned into a business. How the quest for money has hurt the quality of care provided to patients and how it has kept millions of us from having access to even mediocre care.

As former U.S. News & World Report reporter Shannon Brownlee says in the film, the big corporations that control our system don’t want you to die, but they don’t want you to get well, either. That’s because there isn’t nearly as much money to be made keeping you from getting sick and curing you as there is from keeping you on medications for the rest of your life and keeping you coming back to the hospital for expensive tests and treatments.

On the one hand, Escape Fire is a compelling and convincing indictment of a health care system controlled by special interests that profit from the status quo and that spend millions of dollars every year to make sure nothing happens in Washington that would be harmful to their bottom lines.

On the other hand, however, it offers hope and shows how we can make our system less costly while also making it much more rational and patient-focused.

Among those you will meet in the film are Dr. Andrew Weil and the doctors who have graduated from his Center for Integrative Health at the University of Arizona. They are breaking the model of health care delivery that has resulted in patients being able to spend only ten minutes with their doctors – if that much – and not really getting the help they need to get well.

You’ll also meet Dr. Dean Ornish, whose groundbreaking work on the food we eat and the things we do has saved the lives of countless thousands of people who have changed their diets and their behaviors – and without costly medications and invasive procedures.

And you’ll meet Sgt. Rodney Yates as he is being transported to Walter Reed National Military Medical Center in Bethesda, Md., after being injured in combat in Afghanistan. His journey to recovery – and from addiction to a long list of painkillers and other medications – is a kind of metaphor of how we can change our system if we refuse to be bound to keep doing things just because we’ve always done them.

Dr. Don Berwick, former head of the Centers for Medicare and Medicaid Services, inspired the name of the film by telling about a deadly wildfire in Montana in 1949. Several firefighters lost their lives but one survived when he came up with the then unheard-of idea of setting another fire in a circle around him as the wildfire approached. It turned out to be the smartest thing he had ever done. When the fire reached him, it jumped over his “escape fire,” saving him from almost certain death.

Berwick suggests we need to apply the same kind of thinking to solving the many problems that Obamacare will not, that escape fires are just waiting to be discovered that can make the U.S. health care system truly the best and most cost-effective in the world.

Escape Fire tries to shift the conversation away from the partisan bickering to the issues that what really matters: How do we create a sustainable system for the 21st century.

Watch it and then join the conversation.