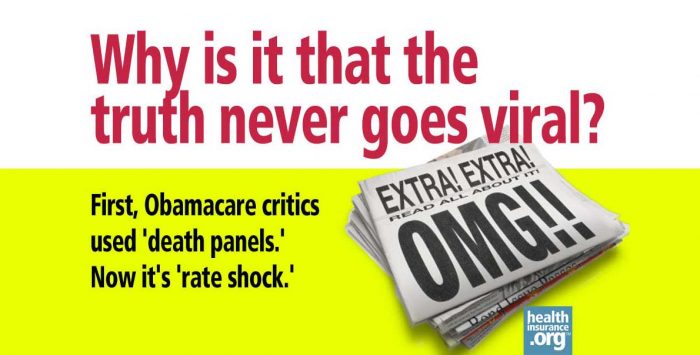 In the post, Jed Graham explains that when the IRS published a final rule about penalties under the Affordable Care Act (ACA), it included a few hypotheticals. For example, the IRS wrote, “The annual national average bronze plan premium for a family of 5 (2 adults, 3 children) is $20,000′ in 2016.”

The $20,000 figure was just an example, Graham explains. “The IRS always uses hypothetical numerical examples in its regulations to illustrate how the rules will work in practice and this was no different.”

Nevertheless, before long, the “conservative news site CNSNews.com began to blare out this shocking headline: ‘IRS: Cheapest Obama Care Plan Will Be $20,000 Per Family.'”

From there, “the ‘fact’ got picked up by countless media outlets and pundits” Graham reports, “most of them on the right,” including:

This is the problem: Once a faux-fact gets out there, even reporters who have no axe to grind continue to repeat it. If you see the number often enough, you assume it must be true.

It should have been clear that this was a hypothetical, Graham points out, if you just looked at other hypotheticals in the IRS ruling. “For example: ‘the annual national average bronze plan premium for a family of 4 (1 adult, 3 children) is $18,000.’

But too many journalists and bloggers cut and paste numbers, without stopping to think: “Wait a minute – that can’t be right!” This is especially true if an outrageous number happens to support their suspicions about Obamacare.

Doing a quick Google search, I found at least one hundred media reports that cited this IRS hypothetical as an IRS fact, including:

In his post, Graham acknowledged, “In this case, I’m guessing the truth won’t go viral.”

He was right. When I Googled his Investors.com story, I couldn’t find a single blog or newspaper that had picked it up. Good news just isn’t that sexy.

Still, you may be wondering: “How much will a family plan cost in 2016? The answer is it that we don’t know.

Granted, there are guesstimates. Graham reports, “In 2016 average premiums for a family of four buying a silver-level plan through ObamaCare’s exchanges are expected to be $15,400 – before subsidies.”

But this is “an estimate of an average.” As I have explained, what you pay for insurance in 2014 will turn on where you live, your age, and whether you buy your own insurance or receive coverage through a large company or a small business.

Recently, I talked to a long-time benefits consultant who pointed out that “even people in the insurance industry don’t know how much these plans are going to cost. HHS hasn’t yet released rules on pricing insurance policies … and there are so many variables.” No doubt they are modeling pricing strategies, but they can’t make final decisions until they see the rules

For instance, will there be different prices for a “family plan” if the “family” consists of two adults? What if the family is one adult and one child? How much less will it cost? How about two adults with five children?

When pricing their products, insurers will do their best to attract the healthiest customers. Thus, “they might make Platinum Plans (which cover 90 percent of all medical costs for the average person) more expensive, proportionately, than Bronze Plans (which cover just 60 percent) – to avoid people who are sicker and likely to choose a richer plan.”

When asked about studies that pretend to know what plans will cost in 2014, my source had one word: “Baloney!” Nevertheless, fear-mongers will continue to churn out reports studded with misinformation.

A campaign that unites insurers and conservative activists

Who is behind the fear mongering? As I noted early in January, “Of course, insurers hope to persuade us that rate hikes are inevitable – while placing the blame on the ACA.”

Recently, the Washington Post’s N.C. Aizenman explained: “The nation’s insurers are engaged in an all-out, last-ditch effort to shield themselves from blame for what they predict will be rate increases on new policies … The insurers’ public relations blitz is being propelled by a growing cast of executives, lobbyists, conservative activists and state health officials. They increasingly use the same catchphrase – ‘rate shock’ – to warn about the potential for price surges.'”

The phrase has been “repeated in a drumbeat of op-eds and policy papers in recent weeks. The argument is a powerful one because the success of the law … depends on enough people signing up for insurance, particularly healthy people.” He quotes insurance industry whistle-blower Wendell Potter, “‘Rate shock’ is the new ‘death panels.'”

If conservatives and insurers join to make young Americans afraid of Obamacare, they might persuade a fair number to opt out of insurance, and pay the penalty instead. This could, indeed, hurt health care reform.

In my next post I will examine a particularly insidious example of this campaign, a report written by the American Action Forum’s Douglas Holtz Eakin, based on a poll of unnamed major insurance companies in five cities. It predicts “massive sticker shock” for young, healthy Americans, and it’s “going viral” not just on Fox – but on web sites I normally trust.