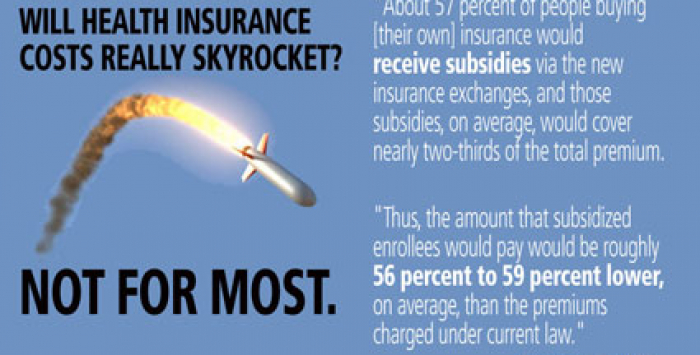 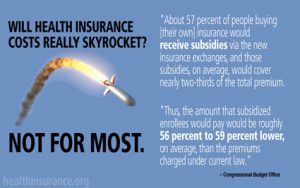 Health reform’s critics are sounding the alarm: in 2014, they say, health insurance premiums will climb, both for small businesses and for individuals who purchase their own coverage. “Hold onto your hat,” writes Bob Laszewski, editor of Health Care Policy and Market Place Review. “There Will Be Sticker Shock!”

Laszweski’s piece has been cross-posted on popular blogs, and his forecasts have been popping up in mainstream newspapers, including USA Today. Such wide circulation makes Laszewski’s warnings worthy of attention, and compels me to ask an important, if impertinent, question: Is what he says true?

The Congressional Budget Office expects that the ACA will have a “negligible” effect on the premiums that large employers pay for insurance, and most experts agree. But in the individual market, Laszewski claims that CBO projections show “10% to 13% premium increases.”

Here is what the CBO actually said:

“About 57 percent of people buying [their own] insurance would receive subsidies via the new insurance exchanges, and those subsidies, on average, would cover nearly two-thirds of the total premium.

“Thus, the amount that subsidized enrollees would pay would be roughly 56 percent to 59 percent lower, on average, than the premiums charged under current law.”

In the next paragraph CBO adds: “Among … enrollees who would Not receive subsidies, premiums would increase by somewhat less than 10 percent to 13 percent.”

Laszewski cherry-picks the paragraphs he quotes, and doesn’t factor in the subsidies. He does mention their existence, but only in passing: “All of these differences in premiums would be before income-based federal subsidies.” He also doesn’t admit how much of the premium the average subsidy would cover – or how many would benefit.

Laszewski also ignores out-of-pocket expenses. While some will pay higher premiums, in the individual market, preventive care will be free, and out-of-pocket maximums capped at $6,350 in 2014 (a number that will be indexed annually).

But Laszewski doesn’t pause to do the arithmetic.

Instead, he throws out numbers based on conversations with unnamed insurance industry sources: “Expect individual health insurance rates for people in their 20s and early 30s to about double,” he warns. If you work for a small company, he asserts, “look for baseline increase of 10% to 20%.”

Recently, Laszwleksi updated his post, quoting Mark Bertolini, CEO of Aetna, who also predicts that “Health insurance premiums may … double for some small businesses and individual buyers.” On average … premiums will rise “25 percent to 50 percent.”

“I expect more health insurers to be echoing the Aetna comments” Laszewski adds. “There is a real concern in the industry they need to get out ahead of this telling people why rates are shooting up  …”

Of course, insurers hope to persuade us that rate hikes are inevitable – while placing the blame on the ACA.

How the ACA slows premium growth

I doubt the industry’s strategy will work.

First, the ACA creates robust rate review programs in each state, so that regulators can ensure that rates are actuarially sound.

Moreover, under the ACA, insurers selling policies to individuals and small groups must spend 80 percent of premiums dollars directly on healthcare – or mail a rebate to customers. This provision kicked in last year, leading to $1.1 billion in refunds and “substantially reduced premiums” in the individual market, the Commonwealth Fund observes.

Meanwhile, since 2010, the underlying cost of care has been sliding: from August 2011 to August 2012 national health expenditures rose just 3.8 percent. Former CBO director Peter Orszag attributes part of the decline to the ACA. If the trend continues, insurers will have difficulty justifying rate increases.

Why many small firms and individuals will pay less

For example, under the ACA, employees will receive richer benefits. But their employers will be shopping in health insurance exchanges, where they will automatically become part of a “large group,” and eligible for large group rates. Today, when insurers hand-sell policies to small firms, high administrative costs force small companies to pay an average of 18 percent more than a large firm for the same policy.

In addition, some owners will qualify for tax credits; as a result, “about 12 percent of their employees” will see their premiums fall by “8 percent to 11 percent.”

In the individual market, Laszewski claims that premiums for younger customers will double because they will be supporting aging Americans.

But under reform legislation, insurers selling policies in the exchanges can still charge older Americans three times what a 30-year-old will pay. Granted, today, in some states, premiums for older customers are five or six times higher. But in nine states, age-rating is either prohibited or limited: younger customers in these states are already helping to support older Americans and shouldn’t see a sharp rise in rates.

More importantly, in all 50 states, 75 to 85 percent of exchange customers under 30 will be eligible for substantial subsidies.

Finally, keep in mind that 16 percent of today’s uninsured are children, 55 percent are under 34; and 73 percent are under 44. Ninety percent will qualify for subsidies, which is why 20-somethings and 30-somethings will join the exchanges. This “influx” of new, younger customers should slice average premiums in the individual market “by 7% to 10%” says CBO – even before you factor in the tax credits.

This is why we call it the “Patient Protection and Affordable Care Act.”