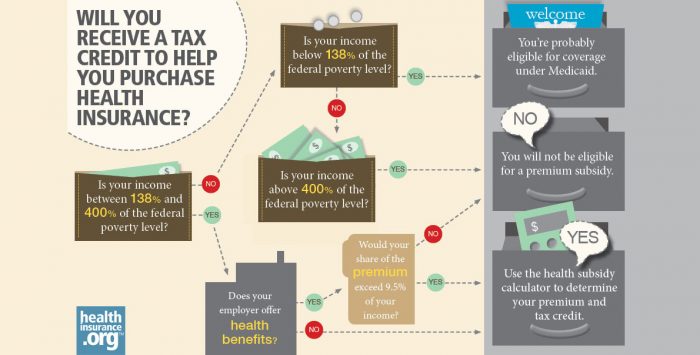 Beginning in 2014, millions of Americans will discover that they qualify for subsidies designed to help them purchase their own health insurance. The aid will come in the form of tax credits, and many will be surprised by how generous they are.

Not only low-income, but moderate-income families earning up to 400 percent of the federal poverty level (FPL) – currently $44,680 for a single person and $92,200 for a family of four – will make the cut. Within that group, households bringing in less than 250 percent of the FPL ($27,925 for a single person, $57,625 for a family of four) also will be eligible for help with out-of-pocket costs.

If your boss offers benefits, you won’t qualify, unless …

If your employer offers health insurance you won’t be eligible for a tax credit – though there are two exceptions to this rule:

If I qualify, how much will I receive?

The size of the tax credit depends on your income, your age, how many people are in your family, and where you live.

The Kaiser Family Foundation (KFF) estimates that a single 30-year-old earning $23,000 a year, and living in a place where medical costs are close to the national average, will qualify for a subsidy of about $1,990 to offset the cost of a policy that the Congressional Budget Office (CBO) projects will cost $3,440 in 2014. He will wind up paying just $1,448 for a year of “comprehensive” insurance.

Keep in mind that, in the ACA’s health insurance exchanges, insurers won’t be able to peddle bare-bones policies. The insurance they offer will have to cover all “essential benefits.”

How, then, could a policy cost just $3,440? The price is lower than you might expect both because the customer is young, and because in the exchange, he becomes part of a “large group” – and eligible for “large group” rates. The CBO estimates that in the exchanges, premiums for a given level of coverage should be 7 to 10 percent lower than they are in the individual market today.

Finally, based on his income, this 30-year-old’s out-of-pocket expenses (above and beyond the premium) would be capped at $2,083.

His co-pays and the amount he has to pay toward his deductible will be capped at $6,250. Even if his entire family were in a car accident, that is the maximum his insurer could ask him to pay.

In other words, in places where medical care is extraordinarily expensive, the subsidy rises with the premium.

How the government calculates your subsidy

While the dollar amount of your subsidy turns on where you live, the percentage of income that you are expected to kick in as your share of the premium is based on how much you earn.

As the table below shows, individuals and families bringing home 133 percent of the FPL will be expected to contribute just 2 percent of their income toward the premium; their tax credit will cover the rest.

The ACA offers four tiers of insurance: Platinum, Gold, Silver and Bronze. Insurers who offer Platinum plans can charge higher premiums, but must pay for 90 percent of the cost of benefits covered by the plan. (The patient will pay 10 percent – until he reaches the limit on his out-of-pocket expenses.)

Moving down the ladder, a Gold plan reimburses for 80 percent of covered benefits, a Silver plan takes care of 70 percent, and a Bronze plan pays for 60 percent.

The second cheapest Silver plan available in a particular region will serve as the benchmark for tax credits. The price of that plan will determine the size of your subsidy, but this doesn’t mean you must pick the Silver plan. If you wish, you can choose Platinum, and apply the subsidy to the higher premium.

But what if you don’t have enough cash on hand to pay for a Platinum plan at the beginning of 2014? After all, you won’t receive the tax credit until you file your 2014 taxes in 2015.

Legislators thought about that. The premium tax credits will be “advanceable,” meaning they will be available when an individual purchases coverage. The IRS will send the check to your insurer. If, during the year, your situation changes, and you’re no longer eligible for the same subsidy, the IRS will settle up with you when you file your 2014 taxes.

Will all states offer subsidies?

Yes – though some on the extreme right have tried to stir up doubts by claiming that when legislators drafted the ACA, they bungled the wording. The law refers to “state run” exchanges. Many states won’t have exchanges set up by 2014; the federal government will have to do it for them. The nit-pickers contend that the government will not be able to provide subsidies in these “federal exchanges.”

But the Republican leadership has never gotten behind this argument – and with good reason. Extremists might find a friendly judge, but a higher court would overturn his decision. At this point, the ACA is settled law: passed by Congress, declared legal by the Supreme Court, and ratified by voters who re-elected President Obama. Game. Set. Match.