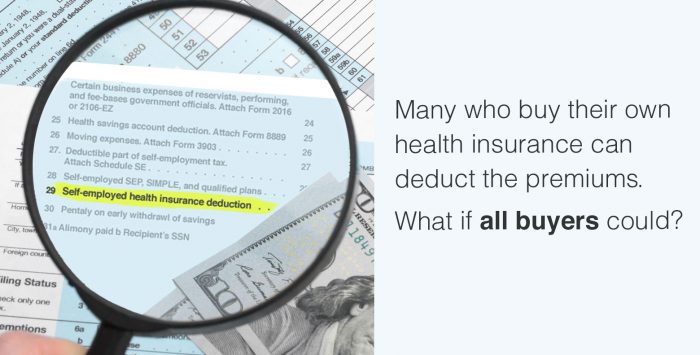 With President-elect Donald Trump and incoming Republican majorities vowing to repeal the Affordable Care Act, some 9 million current enrollees in plans obtained in the ACA marketplace stand to lose the tax credits that directly pay an average of 73 percent of their premiums.

Republicans in Congress, including Tom Price, Trump’s nominee to lead the Department of Health and Human Services, have floated various ACA replacement plans providing skimpier subsidies. One possible change, proposed on Trump’s pre-election campaign website (though not on his current “issues” page devoted to healthcare), is to make health insurance fully deductible for everyone who buys their own insurance in the individual market.

That lesser tax credit already exists for a substantial subset of those who buy their own insurance: the self-employed, for whom the self-employed health insurance tax credit renders premiums fully deductible. Those who take the deduction knock an average of 22 percent off their premiums, according to a study* of 2012 filings by a team led by Bradley Heim, a professor at the University of Indiana’s School of Public and Environmental Affairs.

At present about 9 million people – roughly half of those who buy their own health insurance, whether in the marketplace established by the Affordable Care Act or outside it – do not qualify for (or have simply not obtained) the premium tax credits established by the ACA.

More than half of them may already be subsidized in the manner Trump proposed. In 2014, 4.2 million tax filers took the self-employed health insurance deduction, deducting a total of $28.1 billion from taxable income, according to a yearly estimate published by the IRS. That comes out to about $6,700 per filer, which indicates that a significant number are deducting premiums for more than one person. $6,700 is a bit less than what a pair of 40-year-olds would pay for the average Silver-level plan offered in the ACA marketplace 2014. (ACA-compliant plans offered outside the marketplace are comparable, and slightly more expensive on average.)

“I would guess a lot of these people are farmers, ranchers, consultants, people in the 1099 economy [those who are paid as independent contractors], and that they are in fact getting significant tax advantages,” said Timothy Jost, a health law professor at Washington & Lee University.

Louise Norris, co-owner with her husband Jay of Wellington, Co.-based Colorado Health Insurance (and a regular contributor to healthinsurance.org**), helps individuals seeking insurance in the individual market in one of the most expensive regions of the country. The Norrises themselves have taken the self-employed health insurance deduction for many years as they’ve paid full cost for health coverage for themselves and their two small children.

Louise is quite conscious of the deduction’s impact. “We absolutely consider the tax implications of deducting premiums,” she says. “I love putting those numbers into the tax program and watching the total tax amount in the corner go down.” In some years the Norris’s deduction is worth 15 percent of the premium, and in other years, 25 percent, depending on their earnings.

Who takes the deduction?

The total of 4.2 million filers on Line 29 does not in itself give us a precise view of how many of those who paid full price in the individual market without the benefit of an ACA subsidy are subsidized (to a lesser degree) by the self-employed deduction. For one thing, those who do access ACA tax credits can also claim this deduction if they are self-employed. The large average size of the deduction, however, indicates that most takers were unsubsidized, as the average subsidized marketplace enrollee paid barely over $100 per month in 2016.

Secondly, nearly a million of the 4.2 million takers of the deduction filed “nontaxable returns,” which means they paid no federal income tax. That does not mean, however, that they did not have substantial self-employed income or that they did not get substantial benefit from the deduction. Barely half of American households pay federal income taxes. For some, the deduction may have zeroed out their income tax liability or or added to refunds generated by “refundable” tax credits such as the Child Tax Credit or the Earned Income Tax Credit (EITC).

For example, a married couple with two children and a before-tax income of $40,000 is in a 15 percent income tax bracket, but can zero out their income tax (and obtain a small refund) by claiming the standard married-couple deduction, the EITC, and the child tax credit for their two children. Because they are still in a 15 percent tax bracket, however, if they claim the self-employed health insurance deduction, their refund will grow by 15 percent of whatever amount they claim – that is, whatever amount they paid in eligible health insurance premiums. If they take the 2014 average amount for this deduction, $6,700, their refund will grow by $1,005.

While some who take the deduction are only marginally self-employed, that group is “probably a small part of the whole,” says Heim.

In 2014, just over half of those who took the self-employed health insurance deduction were in households with Adjusted Gross Income over $75,000 – enough in most cases to disqualify them from premium subsidies in the ACA marketplace. Another 455,000 had incomes in the $50-75,000 range, which would render solo filers and many two-person households ineligible for the ACA subsidies. Others with lower incomes might be ineligible for ACA subsidies because they have an employer’s offer of insurance.

Thus, for a substantial majority of these filers, the self-employed health insurance deduction is the only help they get. Their average 22 percent discount is far skimpier than the average 73 percent of premium paid by the federal government for marketplace enrollees, or the average of 82 percent for individual coverage and 71 percent for family coverage paid by employers, according to the Kaiser Family Foundation. Furthermore, the employee’s share of the premium is tax deductible, and the ACA marketplace subsidy is further enriched for most subsidized enrollees by additional cost sharing reduction subsidies.

In Republican theory, deregulating the health insurance market while providing some measure of protection for those with pre-existing conditions would lower premiums, albeit for policies that are less comprehensive than those that comply with the ACA. The combination of lower premiums and full tax deductibility would make up for some of the loss faced by those who currently or potentially rely on ACA subsidies. But tax deductions would provide far greater relief to high-income than to low-income recipients.

If they repeal the ACA, Republicans, in addition to making premiums for plans purchased in the individual market tax deductible, will almost certainly enact a replacement plan offering more limited subsidies to help pay insurance premiums than those provided by the ACA. Full deductibility of all premiums purchased in the individual market could be part of the mix, further augmenting limited credits.

If an ACA replacement or amendment maintains progressivity, providing more aid to lower income insurance seekers, premium deductibility could provide significant relief to not-poor buyers in the individual market – just as it would should the ACA survive.

* Bradley T. Heim et al, “The Impact of the ACA on Premiums: Evidence from the Self-Employed.” Journal of Health Politics, Policy and Law, Oct. 2015. My thanks to Professor Heim for pointing me toward IRS statistical tables that break out filings by adjusted gross income.