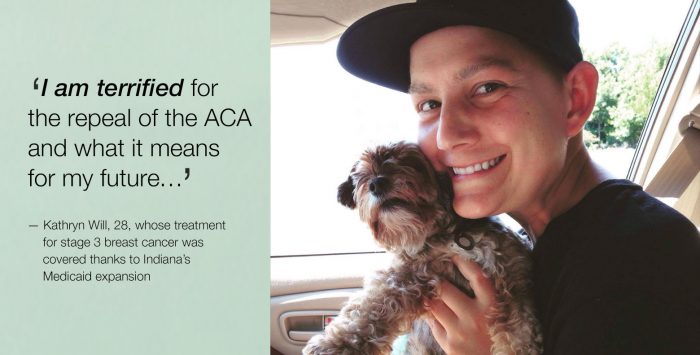 The new Congress has already taken its first steps to repeal Obamacare, setting the stage for a legislative process that will allow the GOP to dismantle much of the health law with a simple majority vote.

While policy wonks analyze the political challenges of repealing Obamacare, millions of Americans who rely on it to help pay for lifesaving medical treatments are panicking.

“I collapsed into tears and cried for an entire day when Trump won. I no longer sleep well, take sleep medication and have nightmares,” says Pamela Gross.

Gross, a resident of Santa Barbara, CA, suffers from chronic lupus and a number of other autoimmune disorders that require her to take life-saving medications that cost upwards of $5,000 per month.

Repealing the law would place Gross, and millions of Americans like her, in a life-threatening position.

The impact of repeal

A recent report by the Urban Institute found that repealing the Affordable Care Act would more than double the current rate of uninsured by 2019, leaving 58.7 million without coverage and increasing the number of uninsured Americans by 103 percent.

This reality has been setting in for Americans since the election, including many who voted for Trump. The Kaiser Family Foundation, for example, in a recent poll found that the number of Republicans who want the law repealed had dropped since the election from 69 percent to 52 percent.

And, it’s likely to start setting in for a greater share of the country as plans to repeal progress and the details of what that means become clearer. According to another of its recent analyses, Kaiser Family Foundation found that almost 30 percent of U.S. adults under the age of 65 have health conditions that would have prevented them from getting health insurance in a pre-ACA world; 53 percent say that either they or a family member has what insurers would consider a pre-existing health condition.

In the Wall Street Journal, the Foundation’s CEO, Drew Altman, said that while most Americans currently get their insurance at work, each one of them is subject to losing coverage when and if they lose access to employment-based health insurance.

“Because so many people with a pre-existing condition have to worry about whether their circumstances might change someday, a much larger share of the public is likely to be interested in this issue than the number of people who stand to be affected immediately by policy changes.” 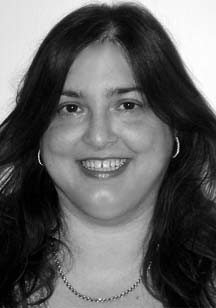 Still, millions of people like Gross, could face immediate effects. While her disability allows her access to Medicare coverage, she also relies on Medi-Cal, California’s Medicaid program, to help pay for costs Medicare doesn’t.

Gross says she was insured before Obamacare became law. But her Medi-Cal coverage, which she relies on to pay her monthly premiums and co-pays, hung in the balance each year when she received a Supplemental Security Income cost of living increase. The minor jump in pay threatened to push her out of eligibility for the program, which would leave her without the means to pay for a private insurance policy and the doctor visits and medications she says her life literally depends on.

“I asked my doctor recently, with all that’s going on would I make it without treatment? The doctor’s answer: “No,” Gross says.

Because Obamacare expanded eligibility for Medicaid and increased the program’s income limits, Gross no longer has to be concerned each year that the cost-of-living increase she receives from her SSI income will throw her out of coverage.

That would change if Medicaid expansion is eliminated as part of the law’s repeal.

“If they repeal I could completely lose eligibility,” she says. “I would die.”

Without the law in place, Cynthia Perry would also be facing a life or death scenario. Perry also suffers from an immune deficiency that requires her to take medication she estimates costs roughly $40,000 per year.

“Of course no one wants to insure me. They’re always looking for an excuse not to,” she says.

In 2014, she and her husband both lost their jobs within a few months of each other. They were covered by her husband’s work-based health plan at the time, which they continued through COBRA. But a detail in the fine print caused the couple to miss a deadline that would have allowed them to extend that coverage. They found themselves suddenly uninsured.

“[My husband] was expecting to find another job before that became a problem, so when we went to expand COBRA coverage we were denied,” Perry says.

By the time they appealed the decision, she had been diagnosed with a very aggressive form of breast cancer. Panic set in.

But in a stroke of luck, Perry learned about losing COBRA coverage two days before the deadline to buy health insurance through the Obamacare marketplace.

“I was already in treatment for cancer at that point,” Perry said.

Her chemotherapy bills came to nearly $130,000 – an amount she says, includes insurer discounts she wouldn’t have received without coverage. Had she not been able to buy a private insurance policy, she would have been left with a very painful choice to make: Pay for chemotherapy out of her own pocket and decimate her family’s finances or opt not to undergo treatment so her family could avoid financial hardship after she was gone.

Perry says without health insurance she may not have opted for treatment.

“My odds of having complete response to chemo were only 22 percent so I don’t know that we would have paid for it out-of-pocket,” she says.

“I know there are people who are angry about the law,” Perry says of Obamacare. “But the flip side is I would have died without it.”

That’s exactly the situation Kathryn Will found herself facing. At just 28 years old, she was diagnosed with stage 3 breast cancer. 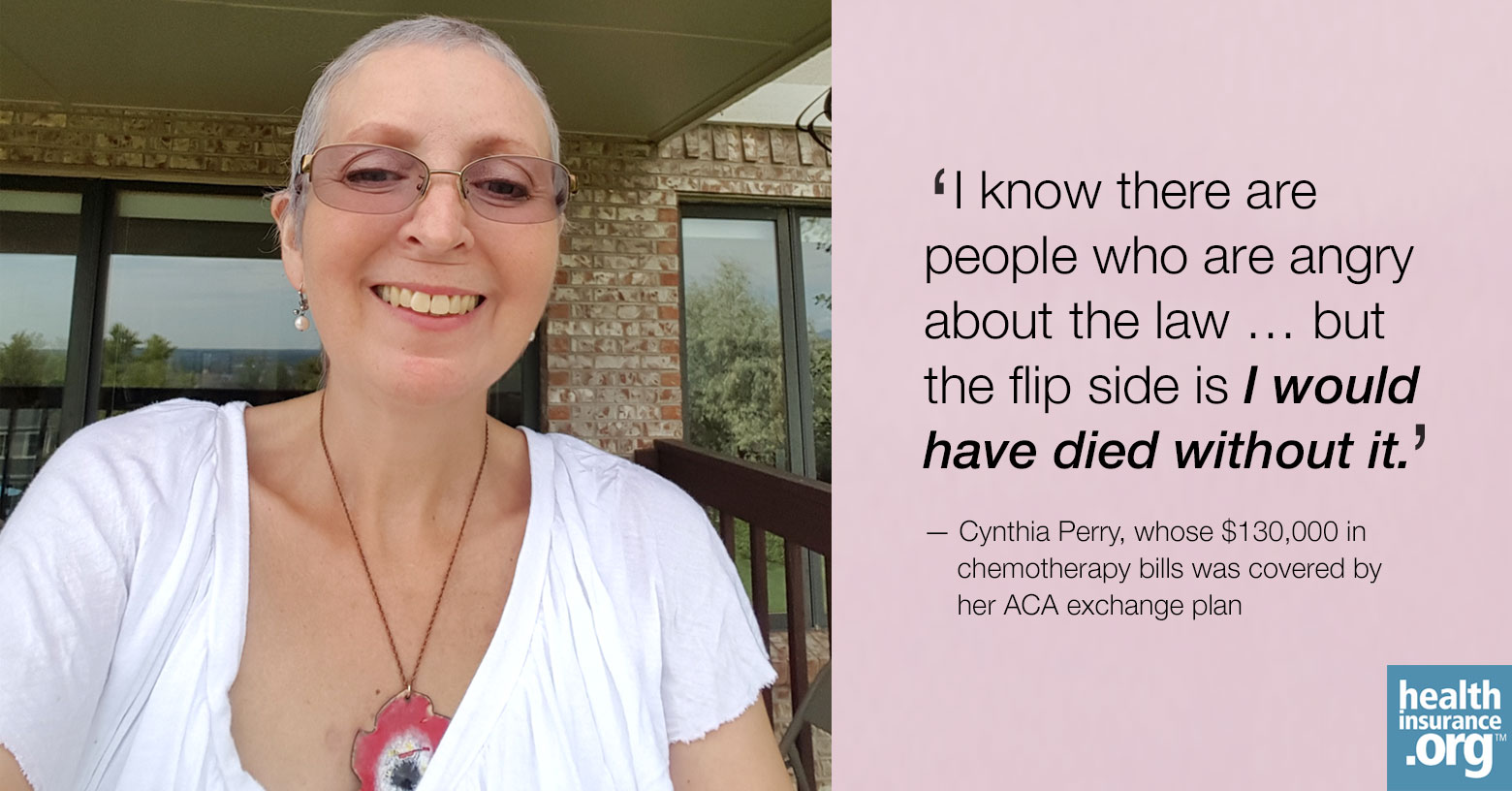 At the time she had insurance she’d purchased through the marketplace. Today, she is covered by Indiana’s Medicaid expansion.

Note of irony here: Vice-president-elect Mike Pence, who remains the governor of Indiana until January 9th, took federal funds to expand Medicaid in his state, despite voting to repeal the law as a member of Congress, and backing repeal now as the incoming VP.

Will has been able to afford the breast cancer treatment she needs for the past 11 months because of her coverage. But she’s less optimistic about her future, given the lifelong treatment she’ll require.

In addition to costly chemotherapy, she’ll need to take anti-hormonal therapy indefinitely, she says – the result of her decision to have her ovaries removed.

“My fear of losing coverage has very much impacted my treatment choices and options,” Will says.

Had she kept her ovaries, Will would have faced the need for a lifelong monthly shot of a very expensive medication. She was too worried about her insurance coverage in the years ahead and whether those shots would be paid for.

With the possibility of the law’s repeal on the horizon, Will has also decided to apply to graduate school in Norway to take advantage of the country’s system of socialized medicine.

“I am terrified for the repeal of the ACA and what it means for my future, both in paying for the numerous scans I need to make sure that I still have no evidence of disease and what would happen if my cancer recurred,” Will says.

“The general public may be ambivalent, excited, or hoping to endure the next four years. I am hoping to survive them.”