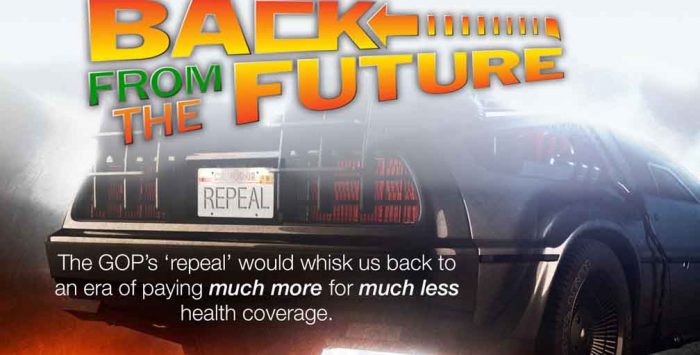 Want to know how you and your family will be affected if Obamacare is repealed in a few weeks?

If you’re expecting to find out from the media, or from our politicians for that matter, all I can say is good luck.

Reporters in Washington are failing us once again, just as they did when health care reform was being debated at the beginning of the Obama administration.

Just about all we’re getting from the Inside-the-Beltway crowd, once again, is the “he said, she said” kind of lazy, superficial reporting that is keeping most folks in the dark about how repeal would affect them.

It’s that same kind of inadequate reporting that left most Americans in the dark eight years ago about how health care reform, if enacted, would affect them.

If we knew nothing more about the consequences of repeal than what we’re hearing from the media, we’d get the impression that few of us would be affected, other than maybe the 20 million or so who’ve become insured because of Obamacare. That’s a substantial number of people, for sure, but just 6 percent of the population. What’s at stake for the other 300 million of us?

The truth is that the Affordable Care Act made significant changes to our health care system that benefit all of us. But chances are, if what you know about Obamacare is based on what you read and hear from DC reporters and pundits, you’re scarcely aware of those changes and understandably uncertain about what you’re likely to lose.

Obamacare’s supporters – and that includes most consumer advocates and, of course, the Democrats responsible for the law – haven’t done much better than the media, in my opinion. As a former PR executive, I kept wondering when the Democrats would get their act together and explain the law in a way that connected with people. Eight years later, I’m still wondering.

The Obama administration and Congressional Democrats are – again in my humble opinion – guilty of gross negligence and incompetence when it comes to communicating effectively. And they have been from Day One. They seem to have felt it wasn’t important to have a strategy to inform the public about what the law is and isn’t and what it does and doesn’t do. If they did have a strategy, they didn’t seem have a clue how to implement it.

Opponents of the law, however, had a solid plan from the very beginning. The goal was to turn public opinion against the law for political gain. They understood the importance of carrying out their strategy, and they were always on message. That’s why millions of people continue to believe, despite abundant evidence to the contrary, that Obamacare was a “government takeover of health care” that has benefited only a few and at the expense of the many.

To appreciate just how successful the opponents’ PR strategy has been, consider this: In August 2008, just six months before debate began in Washington on what would become the Affordable Care Act/Obamacare, a poll conducted by the Commonwealth Fund found that 82 percent of Americans were so dissatisfied with the U.S. health care system they wanted it overhauled.

Obamacare was created to fix a multitude of problems

Here are some of the reasons people were so upset about health care back then, and why the reform law was written as it was:

Obamacare was written to address every one of those issues and others. As a result, all of us – not just the 20 million newly insured – have benefit in these very important ways since the law went into effect:

Repeal brings those problems back

This is what we all stand to lose if lawmakers rush to repeal Obamacare later this month. The law is far from perfect – 30 million of us remain uninsured, coverage is still too expensive for many people, we still spend far more on health care and get less to show for it than people in any other country – but as individual Americans and as a country we are much better off with it than without it.

My hope is that we’ll start seeing substantive coverage in the media about what’s really at stake. If we do, the politicians who seem hell bent on repealing the law might give it a second thought.